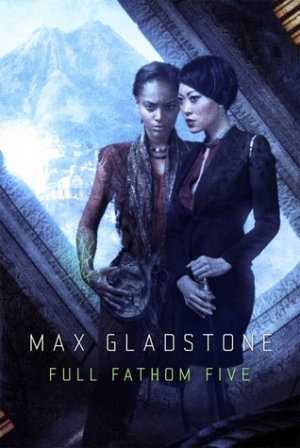 On the island of Kavekana, Kai builds gods to order, then hands them to others to maintain. Her creations aren’t conscious and lack their own wills and voices, but they accept sacrifices, and protect their worshippers from other gods–perfect vehicles for Craftsmen and Craftswomen operating in the divinely controlled Old World. When Kai sees one of her creations dying and tries to save her, she’s grievously injured–then sidelined from the business entirely, her near-suicidal rescue attempt offered up as proof of her instability. But when Kai gets tired of hearing her boss, her coworkers, and her ex-boyfriend call her crazy, and starts digging into the reasons her creations die, she uncovers a conspiracy of silence and fear–which will crush her, if Kai can’t stop it first.
Full Fathom Five is the third novel set in Max Gladstone’s addictive and compelling fantasy world of Three Parts Dead

I have read the first novel in this series “Three Parts Dead”, but skipped the second one because something in the blurb worried me. Then reviews I read seemed to say that I could read this (third) book as a stand-alone, so I dived in. I think you can easily start with this book. There is a character from “Three Parts Dead” playing an important but secondary role, and of course it further expands the world and I am sure advances some very general common themes. But it does not directly continue anything from the first book and if it touches on something from the second, my unfamiliarity with it did not take away from my reading experience.

I mentioned in a previous conversation at DA that “Three Parts Dead” delivered an almost perfect “sink or swim” experience in terms of world building. There are no explanations of what things mean, how things operate, you are supposed to figure it out on your own, but the writer paints a very clear picture of the world even if he does not spell it out for you. For example, I think that Craftsmen and Craftswomen are all lawyers-wizards, but this is not spelled out, we just see them in action and maybe I am wrong and they can do something else just as well. I still am not sure what is the relationship between Gods and Humans in this Universe, but we see Gods die and become resurrected, and we see their lives and their connection to their followers as complex and interesting. In other words, I am not completely sure what is the argument being advanced, but I am positive that I am intrigued and very interested.

As the blurb tells you, the action of this book takes place at the island of Kavekana, where priestess Kai is part of an Order that build Idols and sells them to the clients/pilgrims who come to the Island. Idols are not quite like Gods, but they can bestow gifts on the worshippers, for the right price. Oh, and there is a “soulstuff” involved in building them – bits and pieces of the souls of the people who want to worship Idols and get the gifts. I am not sure how taking the bits and pieces of one’s soul works in this world – but I know that it is a very valuable commodity. Do souls restore themselves? I don’t know but I am interested in learning the answer.

Idols also can die if several business deals of their followers go wrong, and I assume for other reasons too. The book begins when one of the Idols is dying. Instead of letting the death take its course, Kai jumps into the Sacred Pool where the Priests and Priestesses hold the Idols and tries to save her. And then things go terribly wrong – the Idol still dies, Kai is very hurt, and all hell breaks loose when Kai wakes up in the Hospital. Elaine from the first book (fancy lawyer and Craftswoman) is investigating the Idol’s death, why Kai tried to save her, and what Kai’s Order did and did not do, because Elaine’s clients paid money and lost money.

Kai’s Boss Jase does not exactly fire her, but Kai is demoted to a role that includes meeting and greeting the Pilgrims and trying to convince them to do business with the order, rather than building Idols and taking care of them.

The mythology of this series is complex, and once again I cannot be sure that I understood everything. But I am guessing I was not supposed to just yet. As the story progresses, for example, we learn that some time ago the Gods of Kavekana supposedly left the Island and went to fight in the God’s Wars in order not to let Craft take over. It is assumed now that Kavekana has no Gods left anymore, and they only built Idols. We all know what happens when we make assumptions, right?

One thing was clear to me – Gods and their followers seem to take strength from each other but their weaknesses also seem to destroy each other. Business contracts also seem to play important part in Gods’ health, which I personally found amusing.

“Constellations charged the dark, jewel nets melded to a mother-of-pearl sheen. And there they hung: shining shapes against the background noise of transaction and half-formed faith. Gods. More than that: idols, become gods.”

But apparently bad business transactions were not the reason why Kai’s Idols started to die and the closer she gets to uncovering the conspiracy, the more danger she finds herself in.

Kai is a main character of the book, but we also have another main character, fifteen-year-old Izza. Izza is a street kid, or rather a street teenager, who steals things to survive and to help other street kids who depend on her. Izza also tells stories to other kids about non–existent Gods who come to her in dreams. When the book begins, Izza has had enough of the street life and the constant threat of being caught and thrown inside the Penitent as punishment for any kind of law breaking, whenever the officials so desire. I will let you discover what the Penitents are if you decide to read the book. The book is written from both Kai and Izza’s POV in the third person – the narration switches between them. Izza also becomes involved in the mystery of the dying Idols and eventually she and Kai join forces.

I could not stop reading this book – some reviews have said that it moves slower than other books in the series. If that’s true I did not notice – I was too involved in trying to figure out what would happen on the next page.

They fell through space and worlds, following that unseen beacon. They did not slip from realm to realm so much as burst through. The color of the sea changed, wine-red and spreading. Constellations danced and transformed.

The volcano’s mouth approached. At its bottom, pinhead small but growing larger, lay the pool, another sky into which they could fall forever. The size of a cherry now, a fig, lemon orange apple pineapple watermelon –

She braced herself for impact, too late.”