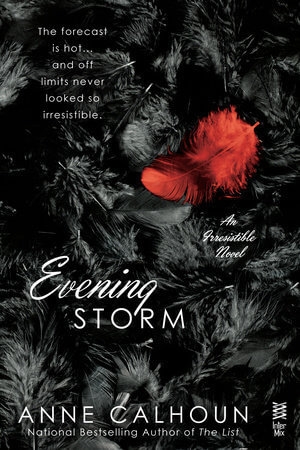 I enjoyed The List earlier this year – I’m pretty much happy to read anything you write, so I requested Evening Storm when it became available. I was even more intrigued to see it was a story about a designer of exclusive lingerie and a client who regularly bought lingerie for his female companions. An unusual set up will always catch my eye.

Evening Storm is loosely connected to The List; – the hero of the earlier book, Daniel Logan, is an FBI agent investigating a Ponzi scheme in an investment bank and working with a whistleblower. The hero of Evening Storm, Ryan Hamilton, is that whistleblower. As such part of the timeline overlaps with The List but it is not necessary to read them in order.  Evening Storm preserves the style of the series but is not as melancholy as the earlier book.

Simone Demarchelier is the daughter of an elite French fashion family. She is fashion royalty if you like. A year or two before the book begins, Simone moves to New York to try her hand at her own lingerie line – making and selling the luxurious garments from her boutique in the fashion district. It is never made entirely clear why she wanted to break from her family and strike out on her own – I gather there is no bad blood between her and her relations.

Ryan Hamilton is a “Wolf of Wall Street” type guy. From working class beginnings, he has raised himself to the elite company of multimillionaires and billionaires who drop significant money on trivialities.  When he accidentally discovered his employer was involved in a Ponzi scheme his conscience kicked in and he went to the FBI. He can’t tell anyone what he’s doing and he has to keep playing the game in order to get his boss to believe he wants in  – the FBI want Ryan to get recordings of the guilty parties admitting to their fraud.

Ryan fosters his image of a rich player who needs more money to fun his increasingly avaricious lifestyle. One day he takes his date, a supermodel, to Irresistible, Simone’s boutique. Once he meets Simone, Ryan is completely gone over her but he can’t involve her in his life and he can’t tell her what’s going on. Even so, he is irresistibly drawn to Simone (and she to him). Even though both know it’s a bad idea, he comes back.  For most of the book they barely touch and their sexual encounters consist of him telling her “stories”, ostensibly of his sexual interludes with the supermodel and the actress. Whether the stories are entirely true is up for debate – how much is manufactured for Simone?  We’ll never know. They are very erotic stories and somehow  create an intimacy between Ryan and Simone. It was unusual and very well done.

I had a few questions by the end of the book, about what effect, if any, the disaster of the Ponzi scheme (once it was made public) would have on Simone’s reputation if she was with Ryan. He is, after all, quite notorious now.  But I entirely believed the romance. I liked the way Ryan and Simone were together and the tight focus between them of “being seen”, truthfulness and honesty. In Simone, Ryan is able to rediscover the man he was/could be without the avarice. While he had not done anything illegal, he comes to realise his business activities have kind of sucked out his soul. Simone, for him, represents a fresh start.

I think the story is more Ryan’s. Simone doesn’t really change or grow throughout, but as I’m a hero-centric reader this suited me. Also, I like a story where the woman is capable and successful and “together”. Ryan is essentially deconstructed during the course of the book, between the pressure of his “undercover” work and his feelings for Simone and he ends the story, a better man and a “whole” man – a fitting partner for Simone.

While there were a few details I’d have liked to know more about, Evening Storm was an entertaining read, sexy and subdued and unusual. Grade: B.