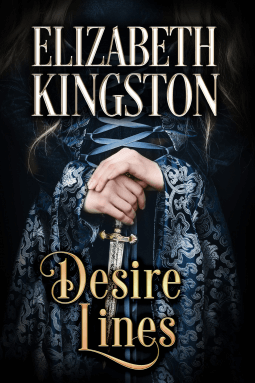 All he ever wanted was to go home. Leaving his life as a noble hostage behind him, Gryff has fled from one danger to another, never safe, always longing for a forbidden return to his conquered Welsh homeland. Held captive by villainous men, his unlikely savior is the most beautiful woman he’s ever seen – and the most deadly. Her silence is unnerving, her generosity unexpected, and her pointed warning that she will not be an object of lust is perfectly clear. Nan has no doubt the ragged Welshman she has saved from certain death was born to better things, far different from the servant’s life she’s led. Though the last thing she wants is a companion on her journey to find her cherished sister, she is compelled to help the man with haunted eyes and a mysterious past. But she feels the pull of his fascination every instant, and her own unexpected desire soon takes them places neither could have foreseen.

I’ve come a long way from the first medieval romances I remember reading which were mostly of the bastard Norman knight/feisty English lady variety. With the recent emphasis in romance on Dukes, the Regency era, and more Dukes, finding medieval romances at all has been a challenge. Locating on without an abundance of “mayhaps” and “prithees” or heroines fighting with broadswords – nearly impossible. Not having read any of your previous books, I referred to what my fellow reviewers here had said and then decided to take the plunge and dive into your “Welsh Blades” series. Well huzzah!

One bugaboo of mine is when heroines are fighting with broadswords. Since Nan’s not swinging a knight’s sword so I’m okay with her knife work. She’s a servant in an age where there was an enormous gulf between the various classes of people. Nan thought a castle steward was above her in station never mind the man she finally falls in love with. Nan, however, isn’t thinking of social rebellion or planning to (wo)man the barricades. But she is a woman who has gained herself some agency in a time when even aristocratic women had little.

Nan’s had issues in the past with her gender alone much less being beautiful with a mouth that Gryff tells her is made for sin – or that’s the way a lot of men see it and why Nan is so often the one cornered, pawed and groped. But thanks to one of her female saviors – and I love how she explains the meanings behind how her knives are marked to Gryff – she’s been given the knowledge, training and means to defend herself.

Gryff longs for his Welsh homeland but acknowledges with bitterness that his father sending Gryff as a hostage to a Norman lord is what saved him from the fate of his father and two of his brothers after his father joined the rebellion of Prince Llewellyn against the English king, Edward I. That doesn’t mean his time among the Normans was all rays of sunshine as the arrogant English never looked at him as an equal.

For all their difference in social stations, Nan and Gryff share some fundamental things. Both are no longer at home or truly accepted by anyone. Gryff still longs for his Welsh home but learned well the ways of the Normans. Nan was born a servant but has been trained to finer things now – at least that’s how her Aunt Mary, living in a hovel, and her sister Bea, living another way, see it. But Nan knows she’s not a lady and never will be and the English still view Gryff as being from a backwater country.

Scarred from a past experience at the hands of a powerful Norman lord, Nan now allows no man to touch her without her permission. Yet even with her training in self defense, she still has a psychological need to keep a knife in her hand even while with a man she finally trusts. This makes total sense to me and I’m glad that her desire to learn about actually wanting a man didn’t magically wipe away her reservations and “cure” her to be able to love and trust a man. When she finally does put down her last knife, it means that much more.

Gryff didn’t fight against the man he considers his king (Edward I) but after the latest Welsh rebellion neither does Gryff take for granted that his safety is assured. His decision to flee makes sense as does his wariness at how Edward will take the news that Gryff has been alive and in hiding for the past five years. Gryff grieves to discover how those he should have been there to lead and help have suffered for his absence. Luck is on Gryff’s side more than once along with some shrewd bargaining of what his land contains and Edward covets. The way Gryff wins out and gets what he wants makes sense both historically and from the way Gryff has been portrayed.

What I found most interesting though is the relationship between Gryff and Nan – well since this is a romance that’s a good thing. Initially Nan is a mystery to Gryff. Who is this woman who can slay bandits, says little, and allows no man to take liberties? Meanwhile Nan’s simple offerings of kindness to one she doesn’t know and who is, let’s be honest, fairly pitiful when she first encounters him shows much of her character. Later when Gryff questions someone who knows her well about why Nan says so little, the answer is illuminating not only about Nan but also about the position of women and servants in that age.

I enjoyed watching the layers of their characters be peeled back and the little ways in which we learn about them, too. Nothing seemed artificial or inserted to be acceptable to modern readers over historical accuracy. And the means that Gryff uses to convince Nan to accept his offer of marriage is delightfully one that she herself had first told him and that in turn gives the book its title. There are many ways to travel, not all of them simple or obvious or laid out by kings. I had fun traveling along with Nan, Gryff, Fuss (who is adorable) and some characters from past books as they find their own way to happiness and service to those dependent on them. B+

“There are always other ways.” She still did not look at him. “The king makes roads, and the Church, and lords and towns – them that have authority, they make roads so you will go the way they tell you to go. But there are some as would choose their own way, and make a path that suits them. Like how a bird will fly direct across the sky, and pay no mind to the roads men build.”
“A bird sees all paths from above, but you are no bird,” he observed. “How did you know the way?”
“It’s the lowly who must search out hidden ways, and stray from the path set out for them, to survive.”

→ Jayne
Previous article: DAILY DEALS: Lunch time treats
Next Post: DAILY DEALS: The one you fall for is the last person you’re looking for per these romances