As I noted in Part 1, I split this into two posts because I wrote longer-than-usual mini-reviews. 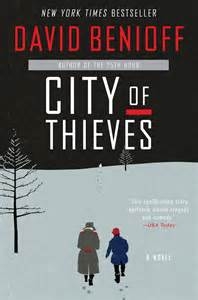 City of Thieves by David Benioff

I picked this up from an Amazon deal somewhere, intrigued by the subject matter (the Siege of Leningrad has fascinated me since I read Paullina Simons’ The Bronze Horseman, probably 15 years ago). I didn’t realize at the time that Benioff was one of the showrunners for Game of Thrones, of which I’m an avid fan.

The book begins with a framing story that suggests it was told to Benioff by his grandfather. I thought that bit was unnecessary, but whatever. Lev is 17 years old and living in a dying, blockaded Leningrad; his father is dead (a minor poet, he was targeted by the NKVD several years before) and his mother and sister already evacuated.

One night while he and other residents of his apartment building are on roof patrol, watching for bombs, a dead German paratrooper appears in the sky and floats to the ground in front of the building. Lev and his comrades are not supposed to leave the roof, or be on the street, but they can’t resist racing down to see what’s what. They begin looting the body but flee when the cops arrive; the punishments for leaving a firefighting detail, breaking curfew and looting are all summary execution. Lev, however, in a fit of chivalry, goes back to help his neighbor, on who he has a crush, after she falls. She ends up getting away, and Lev ends up in the hands of the police.

Lev is put in a prison cell, rather than immediately executed. There he meets Kolya, a brash and oddly cheerful soldier who was picked up for being AWOL. The two are taken to the house of an NKVD commander the next day, and given a seemingly impossible task in exchange for their lives: find a dozen eggs for the commander’s daughter’s wedding cake in the next three days. There are no eggs in Leningrad. There is “library candy”, which are book bindings sold in the market as food (the glue in the bindings provides some nutrition). Also in the open market are glasses of dirt for 100 rubles each; the dirt is from below a bombed food warehouse and full of sugar. But there are no eggs; if there were presumably the commander would have found them himself already.

On Lev and Koyla’s quest they encounter cannibals, possibly the last chicken in Leningrad (alas, a rooster) and a lot of desperate and degraded people. Eventually they venture further out of the city and meet both Russian resistance fighters and Nazis. Kolya approaches almost everything and everyone with a confidence and joie de vivre that Lev seems to find alternately irritating and admirable. City of Thieves really hooked me (at times it broke my heart) and would probably be an A range book if not for a somewhat predictable ending; that brought it down to a B+. 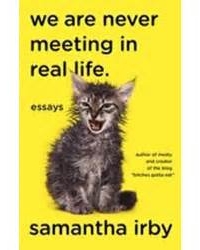 We Are Never Meeting in Real Life by Samantha Irby

I was rooting around for non-fiction to read after finishing David Sedaris’ diaries and I can’t remember if this was recommended as comparable by Amazon or I heard about it somewhere else (I think I had heard of the author and seen the title a couple of times before actually buying the book). We Are Never Meeting in Real Life is a series of essays from the writer behind the “bitches gotta eat” blog, which I guess is a famous blog but I’d never heard of it? (But that’s true of a lot of famous things, especially as I get older, so whatever.) Anyway, the essays (and Irby’s style in general) feel random and kind of all over the place, but not in a bad way. She covers dating, working, food issues, race issues, and her incredibly messed-up family history, among other subjects.

Irby’s style is hyperbolic and conversational, if those two concepts can be reconciled. Pros: Irby is very funny and readable, and often relatable; I liked her a lot. Cons: beneath the humor there is a fair amount of grimness; Irby casually mentions her self-hate in a way that is kind of “haha” but also kind of rings true to an uncomfortable degree. I’m not sure why this bothered me so much (comedians and humorists are sort of notorious for being unhappy, right?) but it really started to get to me after a while. The combination of misanthropy and self-loathing became pretty depressing to read about towards the end. Also, I’m a bit of a priss (maybe more than a bit?) and We are Never Meeting in Real Life was very crude and scatological in spots. I like to think I’m not a pearl-clutcher about such things. I mean, I don’t disapprove of people writing about them, but I also don’t really want to read about them.

This one is a little hard for me to grade – I thought it was well-done but ultimately I don’t think it was for *me*, for the reasons I’ve outlined. I’ll give it a B-. 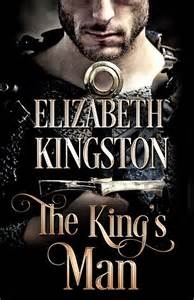 The King’s Man by Elizabeth Kingston

I got this from Daily Deals because it was free AND recommended by Laura Kinsale. If it had come with a scoop of ice cream it couldn’t have been better, at least in theory. In practice I liked it, but didn’t love it. The King’s Man ended up melding what felt like cliche elements with characterization and themes that felt fresh.

Ranulf Ombrier is a knight wandering through the forest near Wales when he’s set upon by the men of Gwenllian of Ruardean. Injured and delirious, Ranulf is cared for by Gwenllian, whom in his delirium he sometimes imagines as an angel. Gwenllian is far from an angel; she’s actually a plain woman who has been raised to be a rarity: an expert swordswoman and chieftain of sorts of her clan.

After being taken to Gwenllian’s family castle, where her mother receives him, Ranulf is sent on his way back to Edward I of England, who wants him for some task that Ranulf is dreading (he’s kind of known for being the king’s go-to guy for what I believe the mafia calls “wet work’). Gwenllian is tasked with leading the force that takes him back, and it’s only when they are on the road that Ranulf puts two and two together and realizes that Gwenllian is the woman who cared for him when he was injured, and, in fact, a woman at all. When she bests him in a sword fight (to be fair, his injuries contribute to his loss), he’s both humiliated and somewhat disgusted. Ranulf is put off by her unnaturalness (which I thought was an appealingly realistic touch), and as determined as ever to escape his transporting party.

Ranulf has a terrible reputation – he killed his foster father while the man slept in his bed, and it’s rumored that he did so at Edward’s behest, from pure greed. The reasons are a bit more complicated, but not as much as I was expecting them to be. In summary, Ranulf is genuinely a bad guy with some issues he needs to work through. I thought he could have been more developed as a character; I saw that he was tortured by the things he’d done but it felt like there was more to the story left untold.

Gwenllian struggles throughout the book with her role. In the time she lives in, she simply can’t be a woman and be a leader of her men – she’s had to mute all her feminine leanings, such as her interest in healing. Her mother has pushed her into a position that she’s honestly somewhat ambivalent about. The choice she ends up having to make in the end feels unfair, but realistic to the era.

Gwenllian and Ranulf are both appealing characters, and the story had some fresh elements to it. But it also had some cliched elements, and the pacing felt off at times. Overall, The King’s Man was a B for me. 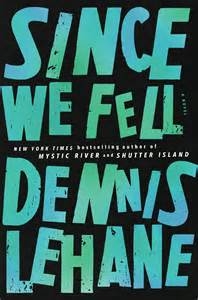 Since We Fell by Dennis Lehane

Each of the three Dennis Lehane books I’ve read have been a little different from each other, genre-wise. The Given Day was a sprawling historical novel set in 1920s Boston. Live By Night, its sequel, was a more straightforward crime drama. I then picked up the author’s first book, A Drink Before War, the first in a series of contemporary mysteries focused on private investigator Patrick Kenzie. His latest book, Since We Fell, is referred to (by Wikipedia, anyway) as a psychological thriller, but you wouldn’t know it until you’re a good way into the book.

After a prologue in which the protagonist, Rachel, shoots her husband and watches him fall over the side of the boat they’re on, the first half of the book reads like relatively straight fiction. Rachel is the daughter of a single mother who ironically gained fame as the author of a series of books about building a successful marriage. Growing up, Rachel and her mother clashed over many issues, not the least of which is the identity of Rachel’s father, whom she remembers from the first three years of her life (she even has memories of the day he left for good). The early part of the book traces Rachel’s quest to find her father, a quest that has its own twists and turns. She graduates from college with a degree that allows her to pursue first print and then TV journalism; as a reporter for a Boston station, Rachel becomes involved with and eventually marries her first husband, a producer at the station.

But Rachel’s “big chance” on the national stage covering the aftermath of the earthquake in Haiti ends in disaster when her traumatic experiences lead to a breakdown on national TV, one that viewers incorrectly assume is attributable to drugs or alcohol. Rachel retreats to her apartment, severely agoraphobic, and ends up divorced. Eventually, she reconnects with Brian, a man she met years earlier when he was a private investigator she tried to hire to find her father. Their romance and eventual marriage is pretty blissful (Brian appears to be an incredible guy – patient, kind and devoted), even while Rachel continues to deal with her crippling fear of the outside world.

The book then pivots into something completely unexpected; saying more would mean big spoilers. Suffice to say that I found the pivot…odd, in a literary sense. I don’t know that I’ve ever read a book that changes tone so abruptly. (Though there is the prologue hanging over the narrative as a warning.) I can’t complain too much, though, because the last 1/3 of the book was really thrilling and quite a page turner. I would even say that Rachel’s issues were somehow, bizarrely addressed and healed, albeit in an extreme and unlikely way. I’m giving Since We Fell an A-.