I saw your novels mentioned on Twitter, where some people I follow read your first book. Very shortly after that, I came across of a review of your second book, A Fallen Lady, on AAR. 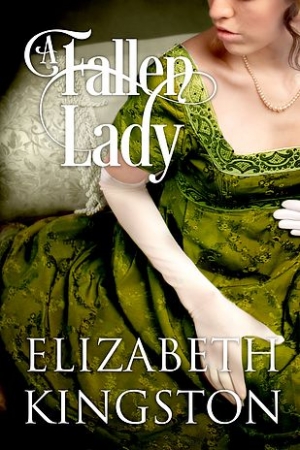 Caz, the AAR reviewer, mentioned that what kept A Fallen Lady from an A- grade was that the heroine was more difficult to like than the hero and held herself back from him to a heartbreaking degree, although her reasons for doing so were grounded in a trauma.

“Difficult” heroines are oftentimes my catnip. I’m tired of the way that heroines in the genre are so often sugar and everything nice (the spice part isn’t always there), while heroes are held to a different standard. I also like books with trauma-based trust issues. That being the case, I downloaded a sample of A Fallen Lady and began to read.

A Fallen Lady is set in 1820 and begins with a prologue that tells us that the yet unnamed heroine suffered something that led to her “ruin,” something she was unable to recount with full coherence afterward.

In the following chapter, we see a letter from Stephen Hampton, Lord Summerdale, who has come to the village of Bartle-on-the-Glen on behalf of Lord Whitemarsh to investigate Whitemarsh’s sister, Helen Dehaven.

Six years earlier, Helen, then seventeen, was seen leaving the woods with her clothes in disarray, as was her fiance, Henley. Gossip soon followed, yet Helen refused to marry the man to whom she lost what had been, in Stephen’s initial view, her virtue.

Now her brother Alex, Lord Whitemarsh, has married a bride who encourages him to reconcile with his sister. Alex has told Stephen that Helen’s explanations for her actions had been wild, incoherent tales which he could not credit. But now he needs to get to the bottom of the truth, and see if he and his sister can possibly reconcile.

Stephen finds Helen in the company of another woman who was once embroiled in scandal, Marianne de Vauteuil, a friend of Helen’s on whom he has come to call in order to take Helen’s measure. But Marianne proves too loyal to Helen to reveal much about her friend, and Helen is downright hostile.

At first Helen believes Stephen is there out of some sinister interest in Marianne, but as soon as they have the chance to talk alone, he tells her of her brother’s desire to learn “whether […] a reconciliation is warranted.”

Helen responds with contempt. Her brother already knows the facts of what happened and should be able to judge her worthiness on his own. She and Stephen part on contentious terms, but she fears that he will return.

And indeed, return he does. Stephen prides himself on being a master at ferreting out yet also keeping secrets, and he sets out to charm Helen and Marianne. Gradually they allow him into their small circle, never dreaming that his reasons for being there are more complicated than what he has revealed to Helen.

Stephen has spent his life on the outside looking in. Initially he is repelled by the way Helen lives: unapolegetically, relying only a bequest from her grandmother and economizing in ways that shock him. But he is also envious of the loyalty Helen has engendered in her friends, Emily, an aristocratic neighbor who is deaf and who must not be seen socializing with ruined women, Maggie, Helen’s maid, and Marianne.

As he befriends these women, he realizes that for the first time in his life he feels included. And he begins to understand, like, and feel drawn to Helen, who reciprocates these feelings. Until the day their attraction reawakens memories of the trauma Helen has tried to bury, and they have a painful falling out.

I don’t want to spoil what happens next—how the collision between Stephen’s sunny charm and Helen’s stormy past splinters Stephen’s ability to stay impartial in the conflict between Helen and her brother, and endangers Helen’s ability to keep a part of herself aloof. Both of them want things they fear they can never have, and even when they find those things together, their fears of love’s impermanence stand in their way.

This is an old fashioned book with an old fashioned storyline. Today’s historical romances rarely deal in “ruin,” the concept that a woman’s reputation could be damaged beyond repair, leading her into an outcast life. Yet it is this injustice that lies at the core of A Fallen Lady, the engine that propels forward its plot.

The world can be heartless, people can be treacherous, and fate can be cruel. It’s in this context that Helen and Stephen’s budding love is jeopardized by the shadows cast by her past and his secrets. These characters have trust issues, and Helen’s are miles long, but I wanted only their happiness.

A Fallen Lady is not without flaws. The writing is at times wordy and heavy on description. It took me a good third of the book to become fully engaged, and I was on the fence about whether to purchase after reading the kindle sample. That I finally did so had more to do with the things I read in online reviews than with the writing. Some judicious trimming could have made this early section more engaging.

The initial change in Stephen, from disapproval and judgement to wanting to be part of Helen’s circle, is a little quick and at first not entirely persuasive, though a more convincing explanation soon follows.

Also, the more I thought about it, the more difficult I found it to believe that someone as warm, affectionate and charming as Stephen so clearly is would have spent his prior thirty-one years so lonely. Nor did I understand exactly why so many in society had trusted him with their secrets when he did not truly befriend them, or reciprocate that trust.

Besides this, there are some copyediting errors, such as the use of “may” in place of “might.” I was also confused by Marianne’s title of “Mme.,” short for “Madame.” As far as I understood, Marianne had never married, so I thought she should have been referred to as Mlle., or Mademoiselle. Unless she was passing for widowed due to the scandal in her past? But if so, this was never mentioned.

The book also had tremendous strengths. I liked Helen a great deal. She was prickly, even cold at turns, but she clung to her pride because it was the only thing she had left to cling to. In a world that treated her unfairly, she found a way to make her a life for herself, and build a community around herself. She was honorable—another concept that was more prominent in the historical romances of the 1990s than it is today—and strong, even when she felt she was anything but.

As for Stephen, while I initially disliked his spying, and felt he judged Helen too harshly at first in his own adherence to propriety, it was wonderful to see him realize how much he’d wronged her and seek justice on her behalf. I appreciated that this too wasn’t without ramifications.

I anticipated many of the plot turns this novel took, but there were also a couple of unexpected complications. The second half was emotional enough to lead me to consume the better part of a box of tissues.

A final caveat is that the epilogue seemed too lighthearted, given the intensity that preceded it. This book has the kind of happy ending that leaves the reader knowing the characters’ road ahead will not be entirely free of bumps. Some readers might not want that, but I actually appreciate it.

Still, I would have liked just a little more joy in Stephen and Helen’s relationship to balance out the secrets and mistrust. I feel that if there had been a little more of that, I would have believed in that lighthearted epilogue in a way that I did not.

This is a suitable book for readers who enjoy a cathartic, emotional read. There’s no annoying mental lusting or talk of seduction; instead the book relies on themes like honor, loyalty, and trust while focusing squarely on that focuses on the characters’ growing feelings of love and the forging of their relationship. Because I appreciated that aspect of A Fallen Lady, I’m giving it a strong B.