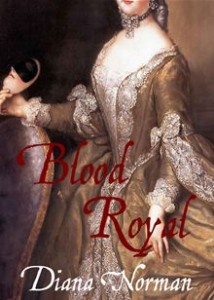 Forced by Sir Robert Walpole into a distasteful marriage and then ruined by her husband’s speculation in the South Sea Bubble, Lady Cecily Fitzhenry vows revenge on the Prime Minister and all his myrmidons – including the creaking Hanoverian court and an obscure Scottish lawyer, Archibald Cameron.Nothing if not spirited, Lady Cecily turns her hand to highway robbery and spying while transforming her sole remaining asset, an old tavern on the Great North Road, into a great coaching inn…and eventually Lady Cecily salvages her country and herself in ways she had never imagined…

I’m slowly working my way through the remaining Diana Norman books I have unread. The key word here is slowly as I don’t want to run out of them too soon. When I checked at Kobo last year to see if any of her older books had been released in eformat, I was honestly not expecting any but the newer ones and her Ariana Franklin books to be available. Imagine my Snoopy-Happy-Dancing surprise when I saw “Blood Royal” and “The Vizard Mask” listed and then noticed the very reasonable price. I was as exuberant as a litter of Golden Retriever puppies chasing a tennis ball. Now which one to read. Since Jennie had already done a short write up of “Mask,” “Blood Royal” it was.

Our heroine, Lady Cecily, is a distant descendant of the characters in “The Morning Gift” though you certainly don’t have to read that one first as it’s a medieval and this is a Georgian. Or should I say Jacobean, depending on which way your politics of the day swayed? First thing I’ll say about Lady Cecily is she’ll drive you crazy at times.

Cecily is a mix of Makepeace Hedley and Diana, Lady Stacpoole. As with Makepeace, she is plunged to the lowest level of financial desperation when she loses almost everything to her elderly husband’s speculation with her money in the South Sea Bubble. As with Diana, she undergoes a sea change in attitude towards the underclass/working class with whom she suddenly has to live and work. Liberty is at stake as well as the fate of a nation.

Cecily is also a snob. She is of the class for whom idleness is an art and emotion a dirty word. Her nose can be higher in the air than a giraffe and heaven help anyone she thinks pities her forced marriage to a parvenu and her enforced kinship with an unfortunate sister in law. She’s also fixated on a young man she met years ago and blinded to the attributes of a man who has loved her and put up with her for years. She can be a mess.

Just to rehash so it’s completely understood, Cecily is not an immediately likable person at times. In fact, a lot of times. She has a blood line that goes back to the Norman Invasion – and the pride of it that goes with that – a fortune and a fair face. Her whole life, she’s had it all and she doesn’t take well to losing society’s regard with her forced marriage to a jumped up tradesman and ultimately the total loss of her place when they lose it all. But Cecily’s got guts, gumption and a practical nature she never dreamed she had. When the going gets tough, the tough get going. Maybe her blood does account for something as she displays determination in spades.

Cecily’s saving grace is the fact that her education under the care of Mary Astell has allowed her to view the lower classes with less disdain than the usual aristocrat. It’s not that Cecily is all hail-bumpkin-well-met, remember she’s got an abundance of snobbery, but that she’s seen them as human beings in the past and learns to do so again.

But Cecily also learns from what happens to her. She’s been down and out and remembers that when faced with people in need. She initially justifies her turn on the pad by seeing her loathed enemy Sir Robert Walpole in everyone she robs only to realize that these are people from whom she might be taking their last hope, the final possessions they own. In the chained, escaped slave “Quick” she sees a man in a country that would deem him merely chattel. In the Packer brothers, she discovers the working class who will tirelessly try to help those they feel respect them as human beings. Oh, yes, Cecily learns and in doing so becomes a complete and better person.

Another thing I love about Norman’s books is how the working class are portrayed. They aren’t ‘tug your forelock, just happy to serve their betters’ people. They are real and are shown as people with depth, concerns and issues. Sometimes they’re good and at other times might not always have paid the tax on that imported brandy from France but I can’t help but enjoy reading about them.

The law and respect for it against the tyranny it can help curb, is woven through the story as with so many of Norman/Franklin’s books. Cecily sees it being used as a bludgeon on the people of England by Walpole and his cronies but it’s Archibald Cameron, a barrister from Scotland, who begins to teach her that it can also reign in the power of those who would crush others for their own gain. English Common Law – you gotta love it.

When a slaver threatens two people dear to Cecily, Archibald and the people of her inn, we get a glimpse of the plight of most of the black people of England who are not viewed as anything but chattel. I was literally holding my breath and reading each page as fast as I could until they were momentarily saved. In Archie’s rousing in court defense of one of them, we see their fight for justice that wouldn’t ultimately arrive until 1830.

It’s during his arguments to save Quick that I saw two things. One – a literary view of “Garrow’s Law” and Two – Lady Cecily finally falling in love with her now husband, Archie. I love that it’s his intelligence and skill as a barrister she finds sexy. His declaration of love is pretty good too.

He looked up. ‘You want me to say it? I’ll say it. If the hosts of hell were swarming ashore, I’d still have plucked ye from the arms of the Devil himself.’

How does Cecily save her nation? Well, in a way that would make her ancestors proud. She might not swing a sword but as she says, a 40 pound weight dropped from 100 feet does have an impact. Sorry, but you just have to read how she does it.

I hope this review will encourage people to try Norman/Franklin’s books and that will encourage her estate to release her other hard to find out-of-print books. It might start a little slowly and brushing up on the 1716 Jacobean uprising and the South Sea Bubble won’t hurt but it builds to a crescendo and is well worth the effort. B+