A couple of weeks ago I blogged about my Kate Daniels reading streak, which I continue to chronicle here.

SPOILERS AHEAD (But please try not to reveal too much about the books I haven’t yet read):

This short story, found in the anthology An Apple for the Creature and narrated in Julie’s viewpoint, picks up after the events of Magic Slays, when Kate takes a reluctant Julie to Seven Star Academy. 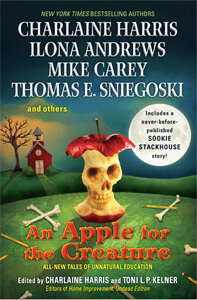 Julie initially believes Kate brought her to Seven Star to enroll her there, but conversation between Kate and Gendun Dargye, the school’s director, soon makes it clear Gendun has requested the Pack’s assistance, and Kate wants Julie to conduct an undercover investigation into the disappearance of a student.

The missing freshman is named Ashlyn. A location spell confirms that she is on school grounds, alive. Ashlyn’s parents are away; the school has twenty-four hours to locate her before they must notify to Atlanta’s Paranormal Activity Division, and PAD’s ham-fisted approach would only make things worse.

Julie gets a visitor pass and a student guide named Brook. She meets another boy named Barka, who likes to pull pranks, and discovers that Ashlyn had no friends in whom to confide her fears. Ashlyn must be hiding, but where? And from whom?

This was a charming little story. Precisely because she knows what it is like to have no friends, Julie feels empathy for Ashlyn and wants to protect her from whatever it is that is threatening her. To do so she has to enlist the aid of a powerful, perhaps dangerous student, Yu Fong, as well as overcome her own loner tendency.

Most of the characters here are teens, so I guess the story falls into the YA fantasy category, but there is no pronounced coming of age element. Julie’s arc is less about growing up and more about acquiring a new community.

I liked the YA-ish feel of the story, and enjoyed the supporting characters of Yu Fong, Ashlyn, and Barka, but Julie was the character about whom I cared most. She has a lot of heart and has clearly learned a lot from Kate; the apple doesn’t fall far from the tree. B/B+.

With Kate and Curran busy elsewhere, Andrea is pulled in by Jim to investigate a case of four murdered shapeshifters. The shapeshifters worked for Raphael’s reclamation business and were found dead on the site of a building he reclaimed, bearing snakebites. 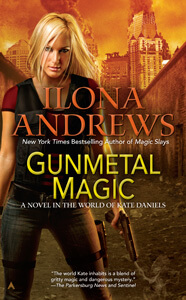 This makes it necessary for Andrea to contact Raphael, with whom she split painfully in Magic Bleeds. Just when Andrea is about to swallow her pride,  apologize for her part in their breakup, and tell him she wants him back, Raphael, in an epic jerk move, brings a gorgeous woman with him to their meeting. The woman announces to Andrea that they are “engaged to be engaged.”

Andrea’s rage has her shifting into her natural shape, thereby forcing a confrontation with the bouda clan that she must now, according to Pack law, join in the next three days. The only other option is to leave Atlanta, which feels like home. If she stays past the three days without joining the Pack, she will force Beast Lord Curran to confront and best her.

Meanwhile the murder investigation continues to force Andrea into proximity with Raphael, who decides he wants her after all. Andrea must decide whether she feels the same.

Besides this, Gunmetal Magic contains glass monsters, snake people, a Russian wizard practicing dark magic, a fight with a draugr (“an undead, unkillable giant”), and an Egyptian god who wants to body snatch Andrea’s body.

There is a lot going on in this book, maybe a little too much. I wanted more downtime from the mayhem in which Andrea could sort out her feelings.

Andrea is not the cuddliest of characters, she’s more of a porcupine, but still, I really felt the wound Raphael had inflicted on her. Raphael is spoiled (this has been stated in Curran, Kate and Andrea’s viewpoints, as well as shown) and Andrea is anything but. I feel that she could do better for herself, and I wouldn’t have minded it a bit if she had moved on with Roman, because I haven’t been shown how Raphael is better for her, outside of the hot sex.

(In one of the earlier books Andrea told Kate that she and Raphael heal each other but I don’t feel that that’s been shown. We certainly have seen them hurt one another, on the other hand.)

Because of the way I felt about this decision of Andrea’s, I also wasn’t sold on her other decision to join the Pack. Was it what she truly wanted and needed, or did she do it because Curran, the Pack, and their laws had her over a barrel?

I loved the scene in which Andrea becomes Aunt B.’s second; the dialogue between B. and Andrea was terrific. But I would have been more convinced of the rightness of this choice for Andrea if not for the Raphael issue.

Still, there was much to appreciate about this book, including the action during the fights with the glass monsters and with the draugr, the snappy dialogue, Andrea’s interactions with Ascanio, and the deliciously spooky villain.

On a minor point, I’m getting tired of the way magic waves get explained in each Kate book but the way they were described in the prologue to this book appealed to me. B.

This was a terrific novella that is bundled into Gunmetal Magic, and takes place concurrently with that novel’s first half, but in Kate’s POV.  I had to laugh when I started reading it because when I read Gunmetal Magic, I thought the explanation of why Kate was too busy to help Andrea with the murder investigation in that book was flimsy at best, a contrivance to allow Andrea to take the starring role. Here I learned just how wrong I was.

Kate and Curran are out on out at a restaurant when an incident takes place which involves a journeyman and journeywoman of The People. The journeyman gifts his date with a necklace, but when she puts it on, it drains her of blood and kills her. The woman’s parents and young brother show up – the father is about to take the necklace when his wife, clearly not human, grabs it and puts it around her son Roderick’s neck instead.

Now the child is slowly being killed by the necklace, which cannot be removed, and his mother refuses to divulge information about it. Kate and Curran take Roderick to Doolittle who tells them they must find a way to remove the necklace within a few days, or else the child will die.

Further investigation of the necklace by Julie reveals it is marked with old runes in a runic alphabet with which Julie, Kate and Ghastek are all unfamiliar. The local expert on runes is a rowdy Viking named Dagfinn, and Kate and Curran’s search for him leads to a brawl with the Vikings, a fight between Curran and Dagfinn, a bet with Ghastek, a confrontation with the draugr, and more.

I really loved this novella. The plight of the little boy moved me but I didn’t feel manipulated the way I often do when children are put in jeopardy. Maybe it was just that I knew Kate and Curran would save him, even if I didn’t know how. I loved the final resolution and the hint of what is to come in Roderick’s future.

Kate’s interactions with Curran show how their relationship is growing, and I also love the way they have to negotiate and reach compromises to make it work. That is the core of relationship building, and it’s good to see it depicted so well in fiction.

What else did I enjoy about this novella? The bet with Ghastek was very funny. I also liked that Kate had to wade into the politics of the Guild and resolve a dispute between the mercenaries and the administrative staff, even though she didn’t want to. And I loved that she thought Curran’s advice to her on how to handle that made him scary, but took that advice anyway. For good or ill, politics is part of life.

There’s a scene between Kate and Andrea that takes place in Gunmetal Magic as well as in this novella, and thus we get to see it from both women’s viewpoints. I thought Kate’s dialogue made a whole lot more sense with her POV included (In Gunmetal Magic I didn’t understand why she asked Andrea if she was going to fight for Raphael right after Raphael had treated Andrea like crap).

“An Ill-Advised Rescue” by Ilona Andrews

This short (very short) story is bundled in with Magic Rises, which I haven’t read yet. On the Acknowledgments page, the authors suggest reading “An Ill-Advised Rescue” first, so I started there.

While Curran is otherwise occupied, Kate is notified by the Guild that Saiman has been kidnapped by former members of the Red Guard and is being held for a million dollar ransom. She decides to take the job and forgo pay so that Saiman will owe her a very large favor. She takes Derek and Grendel for backup, but unless she can convince some members of the kidnappers’ gang that it’s a better idea to hand Saiman over, she and Derek may find themselves outnumbered.

To be honest, I was bored with the first half of the story. Saiman serves an important function in the series as a foil to Kate, one who reveals much about her values, and there’s also the threat he presents in his ability to suss out her identity and sell her out to Roland. Still, he is probably the least interesting character in Kate’s world because he doesn’t seem capable of growth.

All of this is to say that the stakes in the story initially felt low, because if Saiman had died instead, I wouldn’t have missed him much. I really didn’t care if Kate rescued him. Sure, a favor from him might someday come in handy, but at this point, when that day hasn’t come yet, that goal is abstract.

But the second half of the story, in which Kate and Derek put themselves at risk, was much more entertaining.

The conceit of the story is that Kate has to fight off the band of kidnappers without using a power word because she’s already used one in front of Saiman and if he sees her use another, he’ll figure out her identity. But that only holds true as long as Kate uses a different power word, so I don’t see why she couldn’t have used the one Saiman had already seen her use in the past. It’s not like power words only work on one occasion, and she had not used it on the kidnappers before.

Still, this conceit raised the stakes in the fight with the kidnappers, rendering Kate more vulnerable. I liked that a swordsman whom she fought with was a formidable opponent and succeeded in injuring her. Kate had to pour kerosene on her blood to get rid of it, something that should have made Saiman far more suspicious than the use of a power word. This short story was enjoyable nonetheless, with nice humor and action. C+/B-.