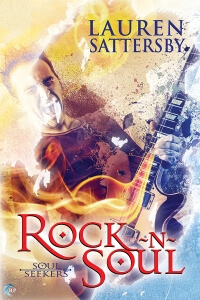 I’m Tyler Lindsey, and until recently, I had an okay apartment, an okay girlfriend, and an okay job as a bellboy at a respectable Boston hotel. Then rock star Chris Raiden died right before I brought his room service—stiffing me on the tip, by the way—and my life went to hell. My fifteen minutes of fame was more like five seconds, and my girlfriend left me in disgust.

But even worse—Chris is haunting me. Not the room where he died, like a normal ghost. No, somehow he’s stuck to me and is insisting on taking care of a bunch of unfinished business in California. So now I have to traipse across the country with the world’s most narcissistic ghost.

But . . . I keep having these weird thoughts. Thoughts about how much I like the way he makes me laugh. Thoughts where I kind of want to kiss the emo-narcissist, even though he’s a ghost and an asshole and I can’t touch him anyway. And even if I could, what will happen when he finishes his business and nothing’s keeping him here anymore?

I am usually not too keen on the romances where one of the main characters is a ghost, simply because I do not particularly care for how the characters get their happy ending in such romances – the other guy is usually dead at the end of the story so that he can be with the ghost. And although their souls are alive to be together, such an ending often feels at most bittersweet to me. Anyway, I definitely looked at the reviews and they promised a different happy ending, ,people liked your voice and the storyline promised a little bit of enemies to lovers (or from people annoying each other to lovers to be more precise). I figured I should give the book a chance.

Overall I liked this story a lot. The blurb gives you the set-up, and the only thing I want to add as a warning is that Chris dies from heroin use. If you cannot read about drug use, skip this book. It is mostly off page, but it is mentioned and talked about plenty of times, and once again, one of the main characters *dies* because of it, so if it is triggering for you stay away.

I enjoyed Tyler’s voice, and the story was compulsively readable to me because of that. Tyler is somebody who works a low-paying job, who counts every penny, and of course this influences his point of view on so many things. Chris is in many ways a privileged jerk, which similarly influences his view on things. I liked that Tyler was not only shocked when he saw Chris appear to him for the first time, but also that he kept talking about it for quite a while – in many stories the characters get over the appearance of the supernatural way too fast.

“So not only I am the only one who can see you, and not only do you not disappear when I take off your ring… but I’m stuck with, like, a restraining order. Except instead of you needing to be more than twenty feet from me at all times, you have to follow me everywhere.” – loc. 621

Note that neither of them is portrayed as superior to each other – Chris may be a selfish jerk who used drugs till he died despite people in his life begging him not to, he may have no clue about how people like Tyler live, and how tips really can make or break him having money for rent/bills, but Tyler eventually learns that Chris is more than that and he does have a heart.

I want to stress that the narrative takes Chris to task quite a few times for being so self-centered and having no clue how people who have less money than him live, and Chris really grows and learns things even if he had to become a ghost to make it happen (better later than never after all ). However, Tyler is taken to task too, for being too hard on people around him and for letting himself stagnate a bit in his circumstances – in no way is he blamed for being poor, or is it suggested that if he had worked harder he would not have been poor. No, all I mean is that while Tyler at some point abandoned his attempts to go back to college to finish his degree, at the end of the story he is going to try to go back, having learned that he should not have stopped fighting against his circumstances.

I really liked these guys together and separately.

As a side note, both of them are bisexual – with using of the actual word and all, and I really appreciated that.

But you might ask me; this is a ghost romance, right? Yes, yes it is and it has everything you expect from this subgenre – the ghost having unfinished business, trying to figure out what that unfinished business was, and trying to finish it with Tyler’s help. It also has a psychic or two (mostly brief appearance as comic relief); the one who helps them is a Tarot card reader, and I thought she was a lovely secondary character.

I’m not revealing any secrets when I say that for a while the narrative tells us that Chris is going to have to move on to the better place and the story won’t end up well – the poignant tone worked for me since I knew that it was a romance (and I did look at the last page), but I also appreciated some humor in between.

“Jesus, I was going to need therapy after this. And to make the whole shitty situation worse, I wasn’t going to be able to talk to anyone about it. Yeah, Richard, I’m upset because my dead boyfriend got a lot deader over the weekend.”

I will leave it up to you readers to decide whether the ending worked or not. For me it worked as long as I do not think about the logistics, but I will take what I can get – I certainly liked it better than – I will go on to be with you forever.