REVIEW: The Wayward One by Danelle Harmon 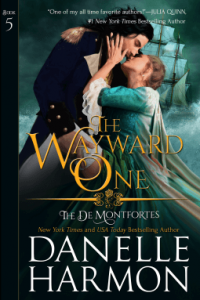 Irish Captain Ruaidri O’ Devir has no love for the English. Taken from his family and pressed into the Royal Navy at a young age, he is now a commander for the fledgling American Continental Navy, hand-picked by John Adams himself to steal a potent new explosive from the British. Ruaidri expects to be successful in his mission. What he doesn’t expect is to fall in love with the sister of the man he’s crossed an ocean to find… Beautiful Lady Nerissa de Montforte is the youngest sibling in a powerful and aristocratic English family. Fiercely guarded by her overprotective brothers, she pines for love after a longtime betrothal was cruelly cut short. When she accompanies her inventor-brother to a demonstration of his new explosive, she never dreams that her wildest longings to find love and freedom are about to be fulfilled … by a man who is wrong for her in every single way except the one that matters most…

Way back when I began reading romance novels again, I was introduced to your de Montforte series. It’s since become standard to have a historical series with a large number of siblings and an overbearing eldest brother – usually a Duke or Marquis – who ultimately winds up the series when he finally finds true love. My rankings for them changed as I read them but overall I enjoyed the series very much. But wait, there was one sibling left and it took until now for baby sister Nerissa to find her match. When I saw this book on offer, I was all “Yes – another de Montforte book!” But then I hesitated just a bit, worried that I’d have changed too much in the time between when I read them and now. Finally I decided to go for it as much because on the cover, the hero has his shirt on. Readers who don’t what I’m referencing should check out the original paperback covers for this series.

Ruaidri is the wounded hero with a ton of backstory issues and pain plus a score to settle with the Brits for his thirteen years of press ganged service in the Royal Navy. Anyone who’s watched “Master & Commander” will be able to image the little trick he pulls to escape during the opening scene and oh, goodness thanks for including a pronunciation guide, of sorts, for his name. He’s the type who enjoys rattling someone’s cage just because it’s easy but his initial reason for doing so with Nerissa is by design. He does sense something deep, powerful and emotional about Nerissa which is a good thing as she’s set to be his heroine.

Meanwhile, Nerissa is a beautiful aristocratic lady – the youngest sibling of the arrogant Duke of Blackheath. Her four doting older brothers have kept her safe but at the cost of her feeling like a caged bird. Have to do this, mustn’t do that, society’s demands, etc, etc. Plus eldest brother Lucien’s meddling ended with her engagement broken as well as her heart.

Ruaidri and Nerissa’s opening encounters are oil and water, spark to gunpowder, fireworks galore. In other words, they’re made for each other. Ha! that Nerissa is no shrinking, ninny violet. She’ll show that upstart Irishman what she’s made up. She’s a de Montforte and he’d better not forget it. If there is no family there to save her, she’ll save herself, by God. He’s an insufferable lout. She’s a shrew and a snob. Ah yes, match made in heaven. Thank goodness the brogue he’s spouting is deliberately overdone just to annoy her as faux brogue and I usually do not get along.

Because he’s a guy he resorts to the standard guy behavior when he can’t have something he wants – he acts irritating towards the object of his affections. Nerissa then needles him back. Jab and counter jab. Nerissa discovers someone in whom she can confide her troubles since he’s a rascal who will soon be brought to heel by her powerful brother, the Duke. In the meantime, though she’ll unburden her heart about her failed engagement.

Yet she discovers that he’s not that bad a fellow. He can even make her laugh and in return he laughs when she tries out her humor on him. He also doesn’t molest her nor allow his crew to be disrespectful and when he dives into the rolling ocean waves to save a man fallen overboard, her opinion of him can’t help but be improved. Back in London, her brother, who makes Admiralty Lords quiver and pale in fear, is turning the town upside down vowing vengeance. When the ransom note arrives, he has a target upon whom to let loose his wrath.

As Nerissa contemplates her life once her adventure is over and Ruaidri is hung from a Royal Navy yardarm, she wilts a little in spirit. She knows her brother will marry her off to save her now ruined reputation and she will begin the life of quiet desperation lead by most women of the ton. It’s Ruaidri who points out to her that her name means sea nymph. So Nerissa details her wrecked love life and former fiancé to the Irishman who abducted her and is jolted when Ruaidri adeptly points out the man’s indecision and waffling. Now if he were the fiancé, he’d put a ring on it and furthermore he shows her a kiss of passion instead of a wimpy one of propriety.

A brush with danger, courtesy of the British Navy, brings Nerissa and Ruaidri closer as truths are revealed and a gamble taken. Ruaidri cottons on to Nerissa’s future emotionally bleak existence and offers her more: a chance at the freedom he can sense she craves, a man who will love and protect her, the chance to do what she wants instead of kowtowing to her overbearing brother’s manipulation – regardless of if Lucien thinks he’s doing this for Nerissa’s own good. Nerissa of course immediately denies of all this. But it does make her stop … and think… and finally dare to ask for what they both want. Whew, that was quick but it feels more than just scratching an itch or giving into only Mental Lusting. In the space of a few days, they’ve gotten past surface and dug deep into who the other is. There are actually reasons for Nerissa’s decisions and bonus points that she knew what she was getting into both times so I wasn’t bothered by her choices. This isn’t just the standard “Oh, I must have one night of love” being made without thinking it through.

The naval battle was unexpected and I was on pins and needles to see how the day would be saved. I thought it was nice that though the Brits might have been gleeful in victory and the Captain was anticipating possible matrimony with Lady Nerissa and thus a promotion, only one seaman was inherently ugly about things rather than just having them all be eeeevil because they’re the enemy. Brother Lucien does need some 18th century anger management classes, though. The only reason I didn’t completely despise him is that for all his glowering and threats, he actually accomplishes very little.

Ruaidri’s interview with Andrew is so guy but, as Ruaidri says, Andrew’s a decent man who loves his sister and wants her to be happy and he loves and honors Nerissa so he wants everything done properly and above board. Plus as Ruaidri tells Nerissa earlier, since she has 3 American sisters-in-law, it’s about time for England to send a female America’s way.

Of course there is Ruaidri’s Deep Dark Secret which he fears to tell Nerissa about only to have it revealed by another. And yes, Nerissa is mad but – and I thought this was nicely done – it’s mainly because once again a beloved man in her life was treating her like a fragile doll. Hadn’t she made it clear to Ruaidri that she wants more from life, she wants to be treated as an intelligent person of strength? Shortly after her understandable initial anger, his acknowledgment of this as they actually talk – imagine, rather than someone stalking off in a snit for a quarter of the book! – elevated my grade along with something else Ruaidri does in order to bring his beloved peace of mind.

Ruaidri and Nerissa are great together and it was also fun to revisit some of her siblings and watch Lucien be taken down a peg – or two. I’m glad I saw this book and glad I took a chance on revisiting a series I first read many years ago. B+