REVIEW: The Only Way by Jamie Sullivan 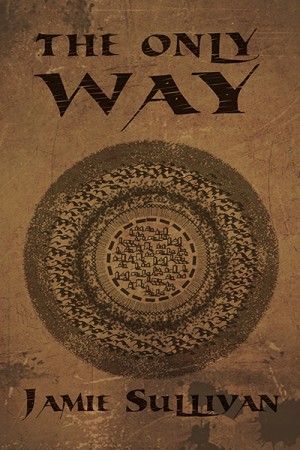 In the Gutter, there are only two ways for a girl to earn a living—among the trash or on her back. When Hart decides that’s not good enough for her, she takes on the high stakes world of no-holds-barred fighting. There’s just one problem: women aren’t allowed in the ring.
Hair cut short and dressed in her father’s old clothes, Hart ventures into the Alley and the world of arena fighting. There she meets Ruby, the daughter of the Arena owner and a brilliant fighter in her own right. When she offers Hart the chance for friendship, Hart cannot resist.
But Ruby thinks Hart is a man, and as she and Ruby grow closer, it gets harder and harder to maintain the façade…

I stumbled upon your story when I was browsing Amazon offerings sorted by publisher. I decided that the blurb sounded like a fun action/adventure and I have not read an f/f story for a while, so I dived in. The writing was very engaging and vivid – I could see the characters and places in my mind, and I am a reader who is not very good with visualization as the text describes it.

The story takes place…somewhere. This world (country? city?) is divided into City, Alley and Gutter. The wealthiest live in the City, people with smaller incomes live in the Alley where a decent living still can be maintained, but they are not nearly as wealthy as people in the City, and the poorest live in the Gutter. There is a barrier between the Gutter and the Alley and you can only get from the Gutter to the Alley if you are chosen for work, be it for one day or on a more permanent basis, mainly to fight or to be a prostitute. In theory you could also work at the factory, but the factories and plants had not been hiring for years and years.

I am not sure how the poorest get thrown into the Gutter (by losing income I am guessing since this is how Hart’s parents ended up in the Gutter, but I am not sure), all I know is that the level of poverty there is horrific. People are literally starving. The only type of work most kids do is to pick through the trash, which gets thrown out from the City into the Gutter, and then resell it at the barrier if you find nice electronics or other nice items. It still pays pennies and does not help basic survival, but sometimes it helps them to eat at night.

” This close, the smell was overpowering. It wasn’t as bad as the sewage that got dumped one ring further out, a wretched scent that sometimes got carried in on hot summer breezes. But still, the smell of rotting food and debris surrounded her. All the trash from the City, the Alley, and the Gutter got dumped here, but it was only the City trash the Gutter kids were interested in. They spent their days scavenging for anything that might be of value and then sold it right back to the idiots who had thrown it out – or, more likely, sold it on to the Alley. There whatever it was would break down further until it was thrown away again, and then it would end up in a Gutter home.

The great circle of trash.

Throwing one last glance at her sisters’ tearstained faces, Hart began picking through the mess. She was good at this.”

As you can see I found the world building sketchy, to put it mildly, however I did not think that its thinness harmed the basic plot much. I mean, it definitely frustrated me as a reader, but I am guessing that the writer considered the bare-bones setting to be enough to be able to tell the story. 18 year old Hart and her family (mother, father, her two little sisters and her little brother) live in the Gutter. They had been able to eat well enough for the last few years because her father was participating in the Fights taking place in the Alley and City (or was it only in the Alley? I am not sure). His wins in fights allowed him to bring money enough to feed his family well and make sure his kids did not pick up trash, but if he lost he brought home nothing.

The fights had some feel of the Hunger Games to me, but only in the sense that fights could end with the death of one of the participants and this outcome was considered completely legal. The narrative also clearly states that people love watching Fights; the wealthy support this sport and think that it is totally cool for poor men to do this because they seem them all as potential criminals and think they are better off wasting their energy (and lives sometimes or maybe often) in the arena rather than committing crimes in the future. This setup gave me a Hunger Games vibe, however at the end we are led to believe that this could be changed, and the sport could become a real sport if the owners of the arenas (there are many of those) were willing to change it. As a result, I was not really sure how the author wanted me to view the Fights.

One day, early in the story, Hart’s father does not come home because he dies in the arena. After a day of seeing kids picking up the trash in the Gutter, Hart decides that she will go and try to fight, since she trained with her dad for years. She dresses up as a boy and goes to the barrier, hoping to be chosen for a fight, and somebody chooses her. Of course she loses her first fight, but when Hart is on her way back to the Gutter, Leo, who owns a different arena and who watched her fight, offers her training opportunities and the potential to fight for him. He seems to be a nice enough guy, someone who used to be a fighter and saved enough money to buy his own gym and arena, and who looks at fighting mostly as a sport. He even gives her a tiny stipend because he realizes that Hart is doing it to help her family.

Hart agrees, of course. She wants to make sure her little siblings are spared the fate of working to pick up trash and her mother cannot even attempt to find a job at the factory because she has a bad back from working at the factory years ago. Leo’s daughter, Ruby, trains new fighters and despite Ruby initially teasing Hart, they quickly become good friends. I am sure it is easy to guess that eventually they will become attracted to each other, but this is not an erotic story. Their friendship was so sweet and touching, and Hart’s realization that the reason that she did not care for boys touching her when she was growing up was because she prefers girls was very nicely done, I thought. Of course my thoughts are those of an outsider, but I felt that their friendship morphed into love in a very believable way. This was not an easy feat to achieve, because more than anything this is an action/adventure story and usually in an action/adventure story, in my experience, the love story gets developed very fast. They meet and they are attracted to each other right away. I thought here the writer achieved a nice balance between action/adventure plot and romantic subplot. I completely bought that the feelings these two girls developed for each other could last a long time (although since they are both eighteen, they may part ways one day and continue their life path in a different direction).

Earlier in my review I stated that at certain point the story gave me a little bit of “Hunger Games” vibe, but it went away pretty fast. Do not get me wrong, I did not buy this book because I was *looking* for a Hunger Games vibe. I loved those books, but I was not interested in a bloody war and most of my favorite characters dying.I guess because the horrors of this society were described so vividly in the beginning, I was led to believe that they might be dealt with in more depth and play a bigger role in the story. I think the writer went the “let’s change peacefully and from within” road if I interpreted the ending correctly, which is of course a valid artistic choice, but for me was a slightly unexpected one.