REVIEW: V is for Valentine by Jeannie Watt 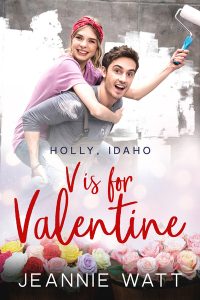 Three weeks to win her heart…

Investment banker Felicity Evans returns home to Holly, Idaho, to answer her injured father’s SOS. He needs her to help him meet his construction deadline on a historic property by Valentine’s Day. Felicity swings a mean hammer, but her life is in Seattle and she’s leaving as soon as the project is finished. One problem with her quick escape plan? Danny Montgomery. Years after moving away, he still complicates her life despite her many efforts to forget him.

For as long as Danny Montgomery can remember, Felicity Evans—Felix to him—has tied his heart in knots. She’s spent years avoiding him after their childhood rivalry, but, short on help, has no choice but to hire him to help her finish renovations on a keystone project for her father. This time, Danny won’t let her ignore her true feelings.

He has until Valentine’s Day to make her his. Can he convince Felix to give them one more chance and prove they’re a perfect match?

I knew who the heroine and hero of this book would be after reading the second book in the series, “Once Upon a Winter Wedding.” Felicity and Danny are more childhood nemeses-to-lovers than adult enemies. After all, how much of a true enemy can you start out to be at four years of age and wearing light up sneakers?

Danny and Felix (as he began calling her years ago) do have a long and illustrious history of pranks which finally petered out when Felicity’s mother was diagnosed with cancer. It was also at that time that Felicity clamped down on her natural exuberance and got serious about life. She felt she needed to set an example for her two younger sisters plus she needed some control at a time when, due to her mother’s death, she felt she had none. Since then, she’s only thrown this over once and she lived to regret that. Now she’s still focused on the goal.

When her injured contractor father needs help meeting a tight renovation deadline, Felicity steps in. The boom in Boise construction has left them without a helper and that’s where Danny steps in. As he explains to Felicity, when she finally grits her teeth and asks for his help, her dad did him a big favor years ago and he’s never forgotten it. Now’s his chance to pay Pete Evans back and also see where his relationship with Felicity stands – though he doesn’t initially tell her that.

She folded her arms over her chest, drilling him with a look that would have made a lesser man squirm. “My dad made me promise to go easy on you because you’re saving his bacon, as he put it.”
“As are you.”
“I’m his daughter. It’s my job to bacon save.” She studied him a moment longer, her full lips pushed into a thoughtful pout. “Are you employed?”
“I am.”
“How’s business?”
“Can’t complain. It keeps me out of trouble—”
She made a small disbelieving sound which shifted into a half cough and he laughed.
“Do I still drive you crazy?” he asked matter-of-factly. “Or are you coasting on fumes from incidents past?” Because they had some incidents past that were worthy of carrying a grudge, but mainly they’d fed off one another. One-upmanship had become a way of life.
She gave him a thoughtful look. “I guess,” she said slowly, “that remains to be seen.”

As the two put in ten+ hour days heaving wallboard, slinging taping mud, feathering edges, and painting, they get to talk and verbally jab at each other a lot. It’s all in good fun and takes them back to growing up when they sharpened their wits on each other. Though Felicity would never say it, she’s missed sparing like this.

But it was fun to poke at him. She had no one in Seattle to poke at who would poke back. She kind of missed it.
She definitely missed it

And when did Danny become so hot? Danny’s rediscovering all he’s missed about Felix and realizing that something has happened in her past that has closed her off to taking chances and risks. When it hits him that he feels more for her than he imagined, can he discover what scared her, and get her to take chances again? Get her to risk their friendship for something more?

Booyah that Felicity knows all about and is competent at construction and renovation. I loved to see her expertly wielding a drill, taping wallboard seams, feathering mud over joints, and rediscovering her dab hand with cutting a paint edge. She and Danny are soon verbally feinting and jabbing, enjoying the thrill of getting the last word. But while Felicity will tell Danny that she dislikes Valentines Day because something happened, which he quickly realizes has to do with a former romance, she won’t explain. She also refuses to agree to anything more than hot kisses and repeatedly tells Danny that she’s not looking for anything long term. Since this is a character driven story, there’s a lot of this.

It takes a great deal of introspection and deep thinking by both of them as they puzzle out their thoughts and emotions to move towards a resolution. The book has the background of them being together for long days as they do construction but most of the action is in their heads and there’s a fair degree of dwelling on the same issues and problems. I do like that Felicity comes to a realization about how her mother’s death affected her as a teenager and formed her aversion to risks. Bravo for Danny knowing just how much to push and when in order to get Felix to give their maybe relationship enough thought. I also liked seeing Felicity with her loving family. I just wish that I hadn’t have had to keep reading these same thoughts as many times as I did. B-