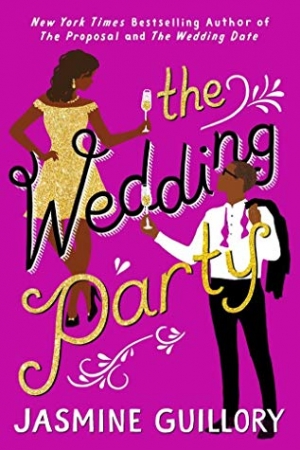 I have your first two books on my TBR but haven’t managed to read them yet. The Wedding Party is book three in your loosely connected series but it stands alone just fine. I didn’t have any trouble jumping in here.

Maddie and Theo are both best friends with Alexa, the heroine from The Wedding Date, who is planning her wedding to Drew. Maddie will be a bridesmaid and Theo a “bridesman” and this will mean they’ll have to spend a lot more time together than usual. This is a problem because Maddie and Theo Do. Not. Get. Along.

Except, Maddie gives Theo a lift home after his birthday party one night, there’s some impressive dance moves and then they’re doing the horizontal tango. It’s so good that the next time they see each other they end up in bed together again. And so it goes until Maddie and Theo decide to just let their affair play out and run its course – within certain rules.

“Rule one: no one can tell Alexa.”

He set his coffee on his bedside table and got in bed next to her.

“Hasn’t that always been the rule? Did you think I was going to burst into Alexa’s office Monday morning and say, ‘Lex, guess what? I’m sleeping with your best friend!’?”

She pictured the look on Alexa’s face if he did that and had to grin.

“If we’re going to make rules, we might as well spell all of them out,” she said.

He leaned against the headboard and picked up his mug.

“This ends with the wedding. Maybe by then we’ll have gotten it

out of our systems, and we can go back to ignoring each other.”

“I can accept that. Anything else?”

“Rule three: no dates, just this.”

He tilted his head and smiled at her.

He knew what she meant. She gestured at the bed.

“All of these rules sound good to me. Anything else?”

“Just … one more.” She brushed her hand over his hair. “Rule four: we only see each other when we’ve been with Alexa. We’re doing this because we have to, not because we want to.” She let out a moan as he sucked her nipple into his mouth.

He rolled her over so she was now underneath him and pulled back. Oh God, why did he stop?

“You get four rules, I get one: no sleeping with anyone else,” he said. “I don’t like sharing.”

Maddie pulled him back down to her.

“I’m an only child. I’m not a big fan of sharing myself.”

It doesn’t take a rocket scientist to work out what happens from there. The plot falls out in fairly predictable ways. Both Maddie and Theo have career things going on as well; in Maddie’s case she is tapped on the shoulder to audition for a fashion makeover show for formerly homeless or underprivileged women to help them get job-interview ready and Theo (he’s the press secretary for the Mayor of Berkeley, California) is working on a statewide pre-K campaign. Those things were fairly interesting and gave the book some extra colour; I do enjoy me some competence porn. I did think it was odd that Maddie defaulted to “the hostess of the show has to be a bitch” when the setup made me think of Queer Eye or Say Yes to the Dress – when everyone is really kind and helpful. Maybe I don’t watch the right shows?

I gather that some readers had an issue with a lack of on-page sex in The Wedding Date. Those readers will be pleased to know that The Wedding Party changes things up. There’s a fair amount of sex, to varying degrees of explicitness throughout the story, though I hasten to add the scenes are at the tamer end of the sexual description spectrum.

I enjoyed The Wedding Party well enough when I was reading it even though it was fairly predictable. However, it was a book that was pretty easy to put down and didn’t inspire any great urgency in me to pick up again.

There was a lengthy scene where Alexa was wedding dress shopping and it was pretty boring. Maybe I’d have been more interested had I read the first book in the series (I doubt it, but it’s possible) but it didn’t advance the plot and I just didn’t care enough. I love wedding dresses – Say Yes to the Dress is great but it’s a visual thing for me. Reading about it? Not so much.

I didn’t hate The Wedding Date but I didn’t love it either. It’s not particularly memorable or revolutionary but it was enjoyable enough. When I was reading, it rated around a B-. But given how easy it was to walk away from, maybe that should be a C+?