This is Metzger’s usual fun and mayhem with a bewildered hero, who often sticks his foot in his mouth, trying to keep up with all the madness into which the heroine plunges him. Courtney Choate, Viscount Chase is a pure man. If a woman should save herself for marriage, then why shouldn’t a man. Plus he saw the heartache his beloved mother suffered because of his rakehell father as well as how his childhood nurse was abandoned by her husband. He decides he’s going to be a better man. But that doesn’t mean that the ton understands this. To them, he’s beginning to look a bit odd and rumors are swirling about his manhood. To keep them at bay, he decides to hire a young woman to play his mistress, a young woman he plucks from the street one snowy night who’s just lost her position as a governess for not arriving on time.

Kathlyn Partland didn’t arrive because of a band of jewel thieves who had fallen out among themselves over a heist. One of the band boarded the same stage she was coming to London on then died after having spoken with her. Now his partners and two Bow Street Runners are convinced that Kathlyn knows where he hid the jewels. With no job and no money, Kathlyn consents to pose as Courtney’s mistress in return for a hefty sum of money and references to start her own school. The only problem is that neither Courtney nor Kathlyn realized just how much attention she would draw as his “mistress” and now her chances of opening a school are shot. No one would let a former member of the demimonde school their young daughters.

Can Courtney convince her to marry him before he kills himself with cold baths and can Kathlyn think of marriage to a man she thinks doesn’t love her? Will the rest of the jewel thieves give up trying to get the jewels from Kathlyn? Will the Bow Street runners find out who really has the loot? Can everything turn out alright by page 220? Yep, you betcha. And I laughed all the way to the end.

The opening scene of the book might put some people off. Courtney is engaged but finds out before the wedding that he is not his intended’s first. Actually not even her second or third. She treats the issue with nonchalance – she’ll be faithful to him until she’s presented him with a legitimate “token of her affection” – but Courtney is aghast at this and determined to stick to his high principles and be faithful after his marriage. Then when his former intended begins to “oh, so lightly” spread rumors about him, the ton gets the wrong idea that he might be gay. Twenty years ago when the book was written, the views of many of us were different too. No disparaging LGBTQA remarks are made but that is part of the set up of why Courtney needs to hire a fake mistress. 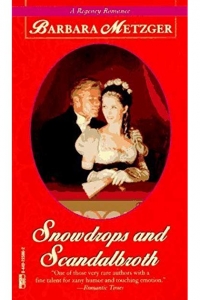 is presented as a high minded woman who bridles at how the man who joins her coach journey is treated by the others – though her helpfulness ends up turning suspicion on herself. She’s having a truly bad week when she and Courtney meet in the cold and snow of an icy London night and he saves her from pickpockets, rudeness and worse. She’s a bit lacking in gratitude towards Courtney then but given what she’s been through and is facing, I can understand. Courtney also has trouble at times in politely framing his questions and advice.

Then Courtney has his moment of inspiration: he needs a faux mistress and Kathlyn needs a job. Why not combine the two? Nanny is appalled but Courtney’s arguments win Kathlyn over – he will give her a years worth of a governess salary and maybe be able to finagle a reference from his mother. And he’ll throw in a new wardrobe. Yet when he begins to squire Kathlyn around and she garners the attention that he’d been hoping for, he begins to realize that she’s far superior a woman in intellect, wit and general goodness to any other woman he’s ever met. Dash it.

Meanwhile Kathlyn is under the mistaken impression that Courtney’s “war wound” will render him incapable of fathering a child but other than that, when he comes off his high horse, the Viscount is kind, courteous, handsome and a man she’s starting to fall for.

This one is as funny as I remember it being with the plot getting more complicated and intricate as it goes along. By the end, poor Kathlyn is about to be kidnapped by three different people and has a frantic Viscount tearing through London trying to find her. Of course, she ends up saving herself because she’s a resourceful young woman. There’s even a way that her future mother-in-law and that woman’s arch nemesis manage to work out that will spit polish Kathlyn’s reputation back to pristine. Okay so probably it wouldn’t have quite worked in real life but it’s good enough.

So how does Courtney convince his beloved that she is, indeed, his beloved?

He picked up the discarded violets that had been sat on, stepped on, and never set in water. Thrusting them into her hand, Courtney sank to his knees beside her sofa. “Miss Kathlyn Partland, I cannot think of anything I have ever wanted more in my entire life than to marry you.” He remembered he still had the ring in his pocket, so he pulled that out and pressed it into her hand, too. “I sincerely believe that I have but one heart, one love to give, and I have been waiting forever just to give it to you.”

“But . . . but our lives have been so different. We have nothing in common.”

Blushing, she replied, “You know I am!”

“There, that’s two things in common right off. Nothing else matters, my love.”

“Oh, Courtney,” she said through tears of happiness, “you are my all-the-world.”

He sat back. “I suppose that’s better than ‘Oh, it’s you,’ but what the deuce does it mean?”

“It means I’ve spent too much time with Master Shakespeare, that’s all.”

“Blasted bookishness! Does it mean yes?”