Roxane Gay’s rave review of your debut novel, a contemporary romance, caught my attention on Goodreads, so when your publicist at Penguin Random House contacted Dear Author to offer us an ARC of The Wedding Date, I jumped on it. 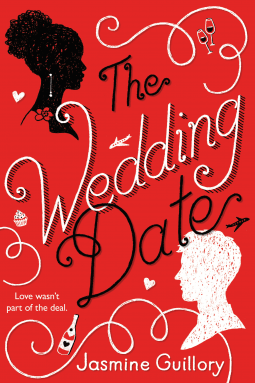 Alexa Monroe and Drew Nichols meet cute when they get stuck in the elevator of San Francisco’s Fairmont Hotel. Drew is staying at the Fairmont while in town from LA to attend a wedding. Alexa’s sister Olivia is also staying at the hotel, and Alexa, a Berkeley resident, is on her way to Olivia’s room, to celebrate Olivia’s having made partner in her New York law firm.

As soon as the elevator gets stuck, Alexa notices the hot white guy with whom she’s trapped. Nothing like this ever happens to her. She is a bit shy, but Drew’s flirty banter draws her out of her shell.

Alexa has brought along some goodies to celebrate Olivia’s success—a bottle of champagne and crackers with fancy cheese. Drew tries to finagle them from her, and Alexa struggles to take her eyes off of him.

“No offense, Drew, but my goal is not to be stuck in this elevator with you all night.” Although those abs… No, remember Olivia? Her sister? Right, Olivia, okay, yes, Olivia. Time to ask him another question so she’d stop staring. “Don’t you have plans tonight? What are you doing here in San Francisco for the weekend anyway?”

He made a face.

She made a face back at him.

He slumped against the wall.

“If prison sentences lasted for a weekend, this one would qualify. Okay, fine, a prison in a cushy hotel, but still.”

She looked around the dim, still elevator.

“Not so cushy right now. What’s so terrible about a wedding?”

He threw his hands in the air.

“Let me count the ways.” He held up one finger. “One: it’s my ex-girlfriend’s wedding.”

Alexa winced. She’d been there. Exes’ weddings were always a trial, even in the best circumstances.

Second finger. “Two: she’s marrying one of my best friends from med school.”

Alexa covered her eyes. Okay, maybe he had a point.

“No, she wasn’t cheating on me with him, but… let’s just say I wasn’t particularly pleased about how it all happened, shall we?”

“Ouch. Well, I understand why you–”

He held up a third finger. “THREE.”

Before they part company, Drew has persuaded Alexa to be his fake date for the wedding. The event poses its set of challenges, from a racist male guest who harasses Alexa, to the bride’s sister, who comes on to Drew. But Drew and Alexa are not only attracted to one another, they like each other, well enough to navigate these successfully.

Drew has told Alexa that he’s “not a girlfriend kind of guy,” so she doesn’t expect more than a fun couple of evenings with him. Yet those turn into a weekend together, at the end of which both Drew and Alexa want to see more of each other. But will the distance between their hometowns and Drew’s commitment phobia stand in their way?

The Wedding Date is a fun, charming and buoyant book. There is a lot of entertaining banter and it’s clear Drew and Alexa really enjoy each other both in bed and out. Both have a sense of humor, occasional insecurities, and careers they are serious, even passionate about—Alexa is the Berkeley mayor’s chief of staff, while Drew is a pediatric surgeon. And we see them at their respective workplaces and get a sense of why they are good at their jobs.

Alexa works hard to convince her boss to institute an arts program that could keep at risk youth out of trouble, and she has personal reasons for caring about whether the program is implemented.

Drew and Alexa’s relationship has a refreshing normalcy and lack of drama, though Drew is a little immature in his fear of planning a future with Alexa. Thankfully, he gets support from his friend, Carlos, a true ally to both Drew and Alexa (I was delighted to see that come fall Carlos will get his own book).

Olivia, too, was an appealing secondary character, as was Alexa’s best friend, Maddie. I liked the mother of one of Drew’s young patients, too.

The book also shows what it’s like for Alexa to enter Drew’s circle where there are few African-Americans. In one scene she attends a party where every woman but her is tall, skinny and blond, while Alexa is petite, curvy and black, and the discomfort of that situation is portrayed with honesty and thoughtfulness.

There was one moment when Drew said something pertaining to Alexa’s work project that made me question his character, and whether Alexa should put up with his view. But he quickly came around to understanding the issue.

The sex scenes are discreet and gloss over some details, something that felt a touch jarring at first. Besides this, I wondered if Drew and Alexa’s parents were still living—we never hear about them—and as a Los Angeles resident, I felt that the Bay Area was portrayed with more insight than LA.

The Wedding Date has a lot to offer; flirty repartee and a sense of fun, as well as substance under the froth. Alexa is a heroine with depth and intelligence, and while Drew isn’t quite as well-drawn, he grows some and his characterization has a way of showing us just how wonderful Alexa is.

Overall, this is a great example of a light contemporary. The conflict is relatively low key, and I wanted it to go a little deeper, but I still felt invested in the characters’ relationship and especially in Alexa. For all of the book’s lightness, it felt real, honest, warm and romantic. B+/A-.