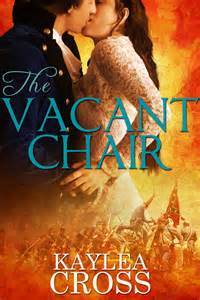 The Civil War has torn Brianna Taylor’s family apart and made her a widow. Determined to ease the suffering of the wounded crowding the Union hospitals and honor the memory of the man she loved, she embarks on a career as a nurse. But then he arrives—a patient who makes her feel alive again in spite of her resolve to stay detached.
Captain Justin Thompson understands the cost of war all too well, yet he felt compelled to fight for the Union his father died defending. Wounded at Cold Harbor and left to die at a military hospital, he owes his life to Brianna, who seems determined to guard her professional boundaries despite his best efforts to breach them. Just as he’s winning the battle for her heart, he’s forced to return to the front of a cruel war that could very well separate them forever.

I can’t recall where I first heard of your historical book, “The Vacant Chair,” but what got me interested in trying it is the fact that both lead characters are Union sympathizers. Usually it’s Union x Confederate, and I’ll admit that I’ve read my fair share of those books, but I thought it would be nice to see what could be done with both hero and heroine pulling and working for the same side.

One thing I definitely like about the book is that it uses some battles not generally seen in most Civil War books I’ve read. Yeah, Sherman in Georgia gets a mention and at the end Justin worries about General Johnston still on the loose in North Carolina but though most of the fighting is done in Virginia it’s the Battle of the Wilderness, Cold Harbor, Cedar Creek and the siege of Richmond that take center place.

Since parts of the book actually take place during battle,s and don’t just mention afterwards that characters were there, I wasn’t surprised that descriptions were blunt as to the level of violence occurring. The action that Justin and his men take part in to hunt down Mosby’s men in Virginia is equally chilling when they finally capture and execute them. War is awful and you portray both the emotional as well as the physically damaging effects. I was surprised when one secondary character dies but given the number of people the characters know who are in arms, it would probably have been unrealistic for them all to make it through.

Brianna is a nurse and Justin is an officer and I was glad to see both of them at work. Brianna doesn’t merely wipe fevered brows, give men sips of water and write letters home – she actually does nursing work and hard, dirty, exhausting and heartbreaking work it is. Like all good nurses I know, she cares passionately for her patients, toils tirelessly at her job and tries to learn all she can to be even better at it tomorrow. Justin is not only admired by the men he leads into combat but is just as determined to lead them all out again. He’s steady under fire and obeys orders to either hold his ground or charge straight at the Rebs. He’s also sickened by war and the wasted lives it’s left behind.

I appreciate that both Brianna and Justin have suffered during the war both in what they’ve seen and dealt with and from the loss of those they love. Nightmares, haunted eyes and alcohol all come into play and thank you for not having love conquer all PTSD. The book also shows how horribly the war losses resonated on the home front and one of the debilitating ways 19th women coped via laudanum. There were also two points in the book where I braced myself for some good, old fashioned yet despised romance tropes which thankfully didn’t occur. My sigh of relief when expected paths were not trodden down was enormous.

I did wonder at how easily Brianna seems to traipse back and forth across Union and Confederate lines as she’s going into and out of Richmond. Some of the language seemed too modern to me as Brianna talks about giving Justin “space” to grieve and how she thinks being around his desolate mother is “toxic” for him. It’s not so much that the rest of the dialog or writing is especially period so perhaps you were going for use of understandable modern vernacular.

Since Justin and Brianna admit their mutual admiration followed by love fairly early in the book, the tension is generally maintained by their separation and fear for each other – Brianna for Justin at the front lines and he for her in Richmond surrounded by Union troops and lacking food and medicine. While the war was raging, there was enough drama that my attention was caught and held. But I’ll be honest and say that at the unfortunate post-war posting for the 5th Michigan, my interest began to lag.

I appreciate all that you did include about the more unpleasant and difficult aspects of war and separation. Your research appears to be thorough and period feel good. I just wish the final bits of the story had maintained the dramatic intensity the book started with. B-