REVIEW: The Mark of the King by Jocelyn Green 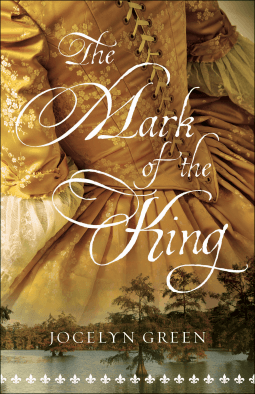 Sweeping Historical Fiction Set at the Edge of the Continent

After being imprisoned and branded for the death of her client, twenty-five-year-old midwife Julianne Chevalier trades her life sentence for exile to the fledgling 1720s French colony of Louisiana, where she hopes to be reunited with her brother, serving there as a soldier. To make the journey, though, women must be married, and Julianne is forced to wed a fellow convict.

When they arrive in New Orleans, there is no news of Benjamin, Julianne’s brother, and searching for answers proves dangerous. What is behind the mystery, and does military officer Marc-Paul Girard know more than he is letting on?

With her dreams of a new life shattered, Julianne must find her way in this dangerous, rugged land, despite never being able to escape the king’s mark on her shoulder that brands her a criminal beyond redemption.

Alright, an inspie featuring French Catholics. Chalk it up to the gorgeous cover that I checked this one out and asked to review it. Even better it covers a time frame/place I’ve not read much about. Win!

Life might not be great in a France now reeling from the War of the Spanish Succession or as we knew it in North American – Queen Anne’s war, but it’s home and the authorities are increasingly anxious about motivating reluctant people to emigrate to the New World even to the point of intercepting all correspondence back to France that could undermine the beautiful spin they’re trying to put on things. Of course if you are a convict, your options to “just say no” are limited. Yeah, Europe using the Americas as a dumping ground again.

It’s the early settlement of New Orleans and it ain’t the Big Easy yet. In fact, it’s hellish and that’s even for the people who want to be there much less the colonists forced there by France as she desperately tries to secure the huge territory. I think the parts describing Julianne and the other colonists’ introduction to their new home is particularly striking and a vivid image of literally starting with nothing.

European powers are pitting Indian tribes against each other for European benefit but there’s a price to be paid in the amount of trade goods the nations now expect and demand for their actions and cooperation. The relationship between the Indians and the French colonists is neither all good nor all bad. People on both sides are loyal or venal. Bienville – the governor – is matter-of-fact about how he feels regarding French/Indian children which I would think was probably a widely held belief.

The challenges the colony faced in daily survival are evident throughout the story. France sent few supplies or equipment for the colonists, they were struggling to adapt to the climate and fauna – imagine a world before “Off” or “Skin So Soft” – and always worried about Indian attacks even closer to New Orleans. Violence is shown and described but not overly detailed. There is also a scene of a miscarriage which could be a trigger.

I was expecting a certain plotline to head in a well trod pathway but it zigged instead in a direction I wouldn’t have anticipated. It opens lots of angst and questions of what is going to happen next. On the other hand though, I had hoped that hidden secrets might be revealed without them turning into Big Mis’s. Silly me, this is a romance after all and those are a ripe source of needed conflict.

Julianne’s position in the colony fluctuates. She arrives as a marked convict with shorn hair plus she has the fleur-de-lys brand. But then she’s accepted as the colony midwife – a position of some trust and authority (at least in France) – before being “outed” and publicly whipped. Then her position changes again. Perhaps this is just a factor of accept the ones you’re with, our colony isn’t that big and we have to all get along but I did wonder at how elastic her reputation was.

For a change, the hero Marc-Paul is the one instantly smitten with Julianne and the one who sets in motion the Big Mis that he feels he must atone for. Brava for Julianne that she stands up for herself and doesn’t jump at his offer of marriage. On the other hand, she insists on doing some not-so-smart stuff as she asserts her independence.

The religious aspects of the story are dished out with a light hand. There’s no overt preachiness – just characters coming to God in their own time with perhaps a little encouragement from friends who have found their own way. It might seem a little corny but I actually liked the bonding scene between Julianne and her step-daughter Lily and how Julianne’s brand brings them together.

There is lots going on here and obviously a great deal of research went into the characters and background of the story. It all makes sense and uses situations as they actually existed then. Still there’s so much that at times the book seems to lightly skim events I’d have liked to see more in depth. As the end drew near, for a moment I wondered if this would turn into a series since there were lots of things to wrap up but one good whopping hurricane sent the story into overdrive and wound things up.

The setting of the book is a major plus for me. I also liked that the less salubrious aspects and opinions of the place and characters aren’t sugar coated. Unfortunately, there’s a lot of info that needs to be conveyed to get readers up to speed with the complex situations the colony faced leading to less showing and more telling but overall I’d give this one a B-