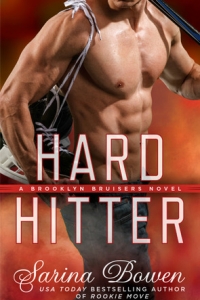 I’ve read and enjoyed most of your Ivy Years series, so it was natural to move on to the Brooklyn Bruisers series when it began with Rookie Move – the two series are even related! I liked Rookie Move, but not as much as the Ivy Years books I read; I gave it a B-. I put this down to my apparent preference for New Adult books being set in college (I thought Rookie Move was still nominally NA, since the protagonists were 24-25). I also thought the plot was somewhat bland.

Still, I had no hesitation about continuing the series, especially when there were several intriguing potential pairings telegraphed in the first book. I wasn’t necessarily expecting Book Two to be about Brooklyn Bruisers team captain Patrick “Doulie” O’Doul and the team’s massage therapist Ariana Bettini, but the excerpt at the end of the first book piqued my interest.

O’Doul was a bit of a cipher in Rookie Move; gruff and tough on that book’s hero, Bruisers rookie Leo Trevi. Ari didn’t play a big part in the first book, that I can recall; besides being a massage therapist she led the team in the new-agey yoga sessions encouraged by the team’s owner, young tech billionaire Nate Kattenberger.

As Hard Hitter starts, O’Doul is finally, reluctantly showing up to a massage session with Ari, an appointment he has put off many times. O’Doul doesn’t like to be touched, which immediately sent up red flags for me. Ari is actually able, with sensitivity and consideration, to get Patrick to relax enough to get something out of the massage. He has a sore hip flexor that can inhibit his game play, so the massage is an important therapeutic tool to help him succeed on the ice (especially important because the Bruisers are in the playoff hunt with a dwindling number of games remaining in the season).

O’Doul grew up in Minnesota in a series of foster homes after his mother died and his father went to prison. He is pretty closed off, with no close friends or romantic attachments (beyond the occasional one-night stand). As a child he gravitated first to a local boxing ring, hoping to be able to defend himself against the older kids in his group homes. Later he found hockey and with it his calling. He’s played for the past 12 years professionally, and even though his role as team enforcer has started to wear on him physically and mentally, he can’t really imagine another life.

Ari is Brooklyn born-and-bred, those she’s the only member of the extended Bettini family left in the borough now. She lives in her Uncle Angelo’s house and takes care of it; he lives in Florida. Ari would have a pretty great life – a dream job just a short walk from a home in a fashionable New York neighborhood – were it not for one thing.

Ari has just had a bad breakup with her boyfriend of eight years, Vince. She kicked him out of her home after an altercation left her with a broken foot. Ari and Vince had a pretty good relationship for a long time but the past few years have been rough; his businesses (he owned a nightclub when he and Ari met) have gone downhill and he became excessively jealous and controlling about the time Ari spent at work and her travel schedule with the team. The accident that injured her foot was the final straw; Ari is embarrassed, even a bit ashamed, that it took her so long to kick Vince to the curb.

But Vince isn’t going easily; he keeps showing up at her home and one day Ari realizes he’s running some sort of operation out of her garage and has changed the locks on her. She’s furious but feels helpless; she’s afraid of doing anything that will escalate the situation and embarrassed that she let things (as she sees it) get so out of hand. I thought this was a pretty good depiction of how a strong woman can find herself in a bad relationship and have difficulty disentangling herself.

O’Doul gets sucked into Ari’s drama inadvertently when he ends up with her phone and sees the threatening texts that Vince is sending her. From there, their relationship deepens, but she’s wary about being the team employee who dates a player; she also feels like having just gotten out of a long relationship, she should probably not jump into something else. O’Doul has his intimacy issues, as well, and another personal reason for wanting to stay out of Ari and Vince’s drama.

I liked both Ari and Patrick, and would have rooted for them to get together, but…in the end I actually did think her point about not jumping into another relationship was valid. I mean, I know this is a romance, and we’re supposed to know that it’s okay; they’re meant for each other and will have their HEA, blah blah blah. But maybe Hard Hitter was just realistic enough that I thought of Ari not solely as a romance heroine, but as a realistic figure; a relatively young woman who spent basically her entire 20s with one guy and needed some time alone to figure things out.

My other issue was about the lack of an issue – specifically Patrick’s. As I mentioned, he is first presented as someone who dislikes being touched, and I assumed that was tied to some sort of abuse in his past. The reality was less dramatic, and while that was fine, it ended up highlighting for me that Patrick was pretty thin as a character. He had a very troubled childhood and is clearly, at age 32, very cut off from people. There’s no indication that he’s done any work on himself or gotten therapy or even recognizes that there are things missing from his life. Then he gets to know Ari and just sort of…gets over it. He’s fine. He realized he likes having a girlfriend, and gee, why not make friends with the other hockey players, too and invite some people over to his apartment for once?

Look, not every romance hero needs to be angsty but a romance hero that is presented as angsty and troubled, should, I think, have his issues dealt with in the course of the book. Instead, Patrick becomes the pursuer pretty early on, and Ari and her ex-boyfriend problems and fears regarding a new relationship become the focus of the conflict. It felt out of balance to me, and again, highlighted that Patrick wasn’t that developed as a character. (The same could be said about Ari to a degree as well, because ultimately she never dealt with any of her relationship stuff except to decide that it didn’t really matter because Patrick was great and she shouldn’t turn down a chance at love because she stayed with a loser for eight years.)

Maybe this is another reason the Ivy Years series worked better for me – I don’t expect 20-year-olds to be as developed as people (and so perhaps as characters). When the characters are in their late 20s and early 30s, I expect them to be better rounded and to have had more life experiences, rather than feeling like they’ve been in suspended animation until the book opens.

Criticisms aside, Hard Hitter was as readable as every other Sarina Bowen book I’ve read, and I did like the characters, so grading it is a little tricky. I think I’ll settle on a B, and hope the next one (not apparently Nate and Becca’s story, dammit) feels better developed to me.