I admit, the beautiful cover was one of the things that attracted me to your new, self-published fantasy-romance-mystery, The Fire Seer. The book is the first in a new series of novels featuring the same two sleuths, Taya and Mandir, whose relationship very gradually shifts from a reluctant partnership to a working relationship to a tentative romance. 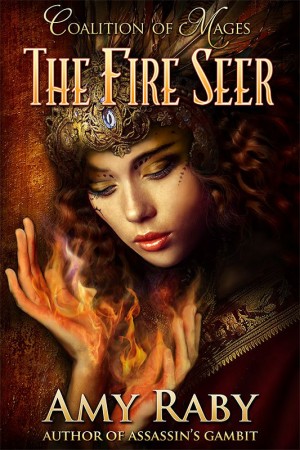 On your site, you describe the book as set “in a fantasy re-imagination of the Indus Valley Civilization, which was contemporary to ancient Egypt and Sumer.” In an Author’s Note at the end of the book, you state:

I used the historical information, sketchy as it was, only as a jumping-off point for world creation. In no way should this novel be considered historically accurate, even leaving out the obvious fantasy elements.

Although I was disappointed (but not surprised) to learn that, I appreciate your candor. The Fire Seer sent me to Wikipedia to learn a little about the real Indus Valley Civilization, which was remarkably advanced for its time. It saddens me that I was never taught about it in school since there is much to admire about it, including its relative egalitarianism.

The world you have created in The Fire Seer, however, is a fantastical society comprised of three castes: farmers, merchants and the ruling class. There is also a fourth group that exists outside this caste system, an organization of magic users called the Coalition.

The Coalition isn’t always just; its people aren’t allowed to use their magical abilities to benefit those who can’t afford to tithe generously to the group. But it does provide the only legal way to practice magic, as well as the only way out of the caste system, and for women, the freedom to take a lover without marrying.

Taya isu Ikkarum is the fire seer the title refers to, a member of the Coalition with an unusually strong gift for controlling fire. Taya arrives in the city of Hrappa to see the magistrate as the book opens. Her task in Hrappa is to catch a “jackal” – the term for a user of illicit magic – who has committed three murders, including that of the magistrate’s own son.

Taya is also about to meet the quradum — magic-using warrior — who will serve as her protector and partner during the investigation. To Taya’s great shock, the quradum turns out to be someone she already knows—Mandir isu Sarrum, whom she met nine years ago, and who trained with her at Mohenjo Temple when they were both teens.

During their years at Mohenjo, Mandir’s initial kindness toward Taya quickly turned to vicious bullying that went on for years. Thanks to Mandir and his egging on of others, Taya was friendless and alone, and his torment of her only came to an end after she almost died and he was sent away to serve out a Year of Penance.

Now Taya has no interest whatsoever in giving Mandir the trust necessary for a successful professional partnership, or allowing him close enough to protect her, as the Coalition dictates. Mandir may claim he is genuinely remorseful, but how can she believe anything he says?

But Taya and Mandir’s investigation of the three deaths puts Taya in danger—and not from Mandir. A vision reveals the involvement of two young women in the crime, but neither can be found. A once-prosperous banana farmer to whom Taya is attracted turns threatening when Taya refuses to heal his blighted banana plants (something the Coalition could execute her for). And when Taya attempts to call a vision of one of the murders, she is nearly drowned through the illicit magic of the “jackal.”

Can Taya trust Mandir to protect her life, when he once put it in jeopardy? Is Mandir genuine in his regret and remorse for past deeds? Will the two catch the killer, and after the events of the last nine years, is it possible for them to find friendship, and perhaps even love?

Taya was a lovely heroine, strong and resilient, and although she had been hurt by Mandir’s actions when they were teens, she did not allow that to color the way she saw most human beings, nor was her self-confidence damaged beyond repair.

Taya had an innate sense of justice and wished she could heal the farmers’ blighted plants even though the Coalition’s rules forbade it and the penalty for doing so without the Coalition’s permission was execution. As this was Taya’s initial assignment as a Coalition representative, it was the first time she experienced these injustices and saw how angry they made others, and it clearly got to her.

In addition to the theme of justice, I liked the way The Fire Seer explores the theme of trust. I found it interesting that although the central romantic conflict is that Taya feels she cannot trust Mandir, Taya actually has the more trusting personality of the two. It is Mandir who is a distrustful person, while Taya is only distrusting where Mandir is concerned—she has learned a bitter lesson there.

The novel interleaves flashbacks that take place in Mohenjo Temple with the present day storyline set in Hrappa. In the flashbacks, we see how Taya arrived in Mohenjo at age fourteen as the only farmer caste student and how Mandir, the son of a prince, set a tone for the cruel way she was treated by her fellow pupils.

Through Mandir’s viewpoint we learn that in his twisted way, Mandir tried to root out an unwelcome attraction to Taya. Mandir was hiding his own bastardy, the fact that his mother was farmer caste and his father ruling caste, and therefore his very existence was a taboo. By egging on other students to bully Taya, as his father had bullied him and his siblings, Mandir tried and failed to make himself feel better.

Mandir’s characterization took me by surprise because the heroes in your Hearts and Thrones series have gentler and more respectful personalities. (One of my favorite things about Assassin’s Gambit was that the heroine was the assassin/bodyguard of the title, and the hero was not the brawn of their partnership).

I appreciated that in The Fire Seer the bullying issue and Mandir’s redemption were treated in a matter of fact manner and not milked for drama and angst. Also, that it was not Taya who changed Mandir, but Mandir who brought about his own gradual improvement. The paragraphs quoted below which help the reader understand Mandir’s evolution come about halfway through the book, so I’ve hidden them:

It was during his Year of Penance that he’d begun to understand that there was another way to relate to people, one that was more satisfying, and also more difficult, at least for him. The unfortunate truth was that the methods of domination and intimidation he’d used at Mohenjo worked. He had been at the top of the social ladder. And yet for all his success, he had not been happy. His heart had never been quiet, and he’d lived in constant fear of losing his status to a backstabbing rival.

During his Year of of Penance, he’d come to learn why he was so unhappy. It was not enough to be feared by those around him. He wanted to connect with someone on a deeper level. He wanted to be loved. And to win love, he had to treat people with kindness and respect. He understood that now.

Still, these new concepts lay on him like ill-fitting clothes. His intentions might be good, but he lacked the skills. He was like a schoolboy again with Taya, awkward and fumbling. During times of frustration, he lapsed into his old ways, but at least Taya challenged him on those occasions, so that he knew when he was being a zebu’s ass. In that sense, he desperately needed her.

It is evident that Taya and Mandir’s personalities complement each other well and that had it not been for Mandir’s actions back in Mohenjo, they might have made a great couple. I was very grateful, though, that Taya was so slow to start trusting Mandir again despite admitting to herself that he was physically attractive.

The slow and gradual evolution of the relationship from a very reluctant cooperation to tentative partnership to a budding romance was necessary and I was so glad it wasn’t fast-tracked, but toward the end of the book, things did start to move a bit quickly for me. The one and only sex scene comes very close to the end, but given that more books about Mandir and Taya are planned, I would have preferred that this aspect of their relationship be postponed until book two or three.

As for the other aspects of the book, I thought the mystery was creative—indeed I can see why the novel also won the Daphne du Maurier Award for Excellence in Mystery/Suspense in 2012, when it was still an unpublished manuscript. It had enough red herrings to keep me guessing until the identity of the killer was revealed.

I had more mixed feelings about the fantasy aspect. I liked the religion and thought the integration of its origin myth into the characters’ backgrounds made for interesting reading but was a bit hard to suspend disbelief in. Some aspects of the world, like the clay buildings and tablets, had a historical feel, while others, like having an organization called the Coalition, had a more contemporary feel, and these did not always merge well.

I also have reservations about borrowing from such a little known culture while introducing elements from other cultures and periods into the book. It’s problematic in my eyes.

Even so, I liked the thoughtful tone of the romance itself, and the mystery also absorbed me. And though the world wasn’t historically accurate, I enjoyed the time I spent there. C+/B- for The Fire Seer.