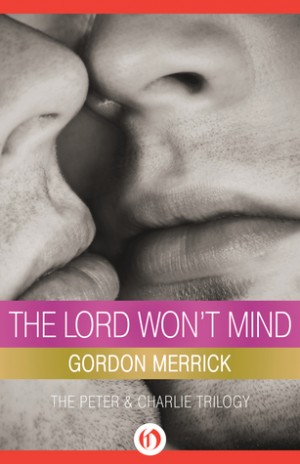 REVIEW CONTAINS A LOT OF SPOILERS.

Several years ago when I was still a relative newbie to m/m romance a book friend at my favorite book discussion forum introduced me to quite a few older gay romance books, in order to put my introduction to m/m romance in perspective. One of the books she suggested to me was this one; I bought the book in paperback and I thought that I read it. When I saw that Open Road was reissuing Gordon Merrick’s books for Kindle I wanted to bring “The Lord Won’t Mind” to Dear Author’s readers and I requested a review copy.

All I remembered from looking at this book in paperback years ago was the feeling of overwhelming joy two characters felt about each other. I did not remember anything else and now, after a careful reread I discovered the reason why – I think I kept skimming and even skipping pages. And if I was not reading the book for review I would have done same thing now as well.

I rarely feel guilty for not liking a book but this is one of the rare situations where I do. I can imagine how important it was for many gay people in the 1970s to see a gay romance on the NY Times bestseller list and just to see two main characters falling in love depicted positively. Unfortunately, I have to grade the book based on whether it worked for me as a reader and more things did not work than it did.

The book opens up with Charlie Mills having a conversation with his grandmother C.B. about a young man who is coming to stay with her, whom she is hoping will become good friends with Charlie. The narrator clearly lets us know that he is Charlie, but then he hides away and says:
“I will not associate myself with the things I have to tell. If I must intrude occasionally, it will be from the distance of time and change. Charlie Mills has nothing to do with me.”
The narrator mostly keeps his promise and the book is written from a third person limited POV which mostly rotates between Charlie and the young man who is coming to stay with them, Peter. The book starts “in the last summer of peace” before the Second World War, but very little page space is devoted to the larger historical setting.

Charlie hopes to become fast friends with Peter and this seems to be what his grandmother wants as well. Charlie also wants to share sexual adventures with Peter and is determined to find out the very day he arrives whether it will work out between them. You also have to know that Charlie is obsessed with sex and is immensely proud that he has not met any guy whose “sex” (the writer calls them “sexes” quite consistently throughout the book so I am going with his word of choice) was bigger than his.

“There was no opportunity for the sexual adventures that had been for years the core of his existence. He thought of his childhood visits to C.B. in the city, when he would find the closets piled high with gaily wrapped presents, impromptu Christmases whose memory still made him tingle with delight. It was like her to make him the gift of ideal companion.”

Charlie’s ploy to discover whether Peter will participate in the sexual adventures with him plays out pretty much right after Peter arrives, all innocence and beauty and lo and behold, everything works out between them. Right away Peter is in love with him. And when I say right away I mean right away. Right after they measured parts of each other’s bodies while naked, which was I thought very funny, but for me did not inspire thoughts of everlasting love.

“Peter kept his eyes averted, his mouth working. “What’s the point of measuring? I’m not as big as you are,” he managed finally.
“That’s nothing. I’ve never met anybody who was. You damn nearly are. There’s probably less difference than you think.” To ease Peter’s evident distress, to relieve him of self-consciousness at the start, he maintained the pretense of cheerful, scientific detachment. He crouched down, and Peter’s sex leaped and quivered before him, the head as taut and smooth as ripe fruit. He ran his tongue over his lips and opened his mouth, but checked himself. He would wait another moment before any direct love play.

Everything that had happened up to now could be written off as a physiological accident, without erotic significance. Peter still hadn’t made any overt move. He pulled down the shorts and scanty underwear and lifted each big foot in turn to disentangle them. He applied the tape to the leaping sex, allowing his hands to become cautiously caressing and making no attempt at accuracy. It became as rigidly immobile as steel under his touch, and he saw the boy’s knees begin to tremble. He straightened and handed over the tape, his thumb on the mark, giving him an extra inch. He took Peter’s arm and guided him around and backed him up, their sexes playing against each other as they moved, and forced him gently down on the edge of the bed. “There,” he said, “you can get at me better that way”.

Peter has an orgasm right after this part, we discover that he never done that before, and he is very eager to learn everything. And in a day or two he declares that he is in love with Charlie.

I had to kept reminding myself again how important it was that this romance was published in 1970s, I had to remind myself that what I read as comical moments were not likely to be meant as such, but once again I can only report my own perception and interpretation and I was not very happy. I did not buy their very Insta!Love at all.

Charlie and Peter have a lot of fun, Charlie has a lot of affection for Peter, but Peter seems to accept that he is gay much faster than Charlie. No matter how much affection and love he feels for Peter Charlie keeps insisting that “he is not queer”. And if he is doing it with girls, it does not matter and should not matter to Peter. I wanted to kick Charlie really hard, because I felt really bad for Peter.

I know I should have felt bad for Charlie because of his constant persistence throughout much of the book that being gay is wrong and at the very least he also has to have sex with a woman to be “normal”. I however just could not feel bad for this specific fictional character. I thought he treated Peter horribly way too many times – Peter was not supposed to spend time with another gay friend, while Charlie was out with a woman. I thought he treated the women he was with horribly too, he was borderline violent and sometimes not just borderline. The only woman Charlie seemed to respect was his grandmother C.B. He was scared to be less than ideal in her eyes, because she treated him as an epitome of beauty and talent. And his grandmother seemed to only care about promoting the careers and well-being of young men according to Charlie himself; and she had no use for females. She felt creepier and creepier to me as the book progressed and by the end of her character arc she was disgusting. It was disgusting in the sense of what kind of person she turned out to be.

I was also frankly tired of the book’s condescending attitudes towards Black people. I understand that it takes place in 1940s for the most part, but I really did not feel that the story cared much about historical authenticity overall, and it was disappointing that this was the theme where the story tried to be historically accurate.

Due to some lucky circumstances Charlie and Peter manage to live together for some time when they go to New York, but then Charlie’s need to not be gay and to keep his relationship with Peter a secret eventually breaks them apart. Poor innocent lamb Peter tries to be faithful to Charlie emotionally, if not physically, but eventually he meets a nice guy whom he sort of falls for.

“He stood without moving, realizing that he was going to be unfaithful to Charlie at last; he had never allowed others to count. Tears came to his eyes as he felt Charlie’s hold slipping. He had built his life, such as it was, around his empty commitment; it would be strange to be without it. He was not yet released from the prison to which he had condemned himself, but he was no longer sealed off beyond reach or hope. He felt limitations of freedom. Perhaps Tim would complete the miracle on Friday.”

Charlie gets married, but after a violent break up with his wife (they fought, she hurt his cock, literally she tore it in two places and there was blood. He hurt her a lot too. I am guessing this was some sort of symbolism but I am not sure), he came back to Peter and fully accepted that he was Queer.
“All right about the queer part. I’ve lied to myself and you. I’m as queer as coot”.
Usually I love very much to read about growth and change in a flawed character and Charlie’s acceptance of all the crappy things he said and did should have appeased me, but it just came too little too late in this case.

In the meantime they discovered C.B.’s true awful horrible nature and family disposition. They lived happily ever after.