REVIEW: The Fighter and the Fallen Woman by Pamela Cayne 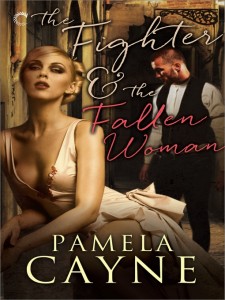 The blurb says that King and Lady have the choice of staying spoiled and safe or breaking free but I felt like that wasn’t the real conflict. Because of Mr. Adams, their owner’s capriciousness (perhaps one might say psycopathic), every day was a possible danger to them if Mr. Adams wasn’t happy so spoiled wasn’t really an option.

King is a fighter under Mr. Adams’ control whereas Lady is Mr. Adams’ mistress. Lady is no faux mistress either. She’s used and abused, but as King points out, she’s a survivor.  Lady was a whore from a young age. She wanted something more for herself and would go to ___ and began to mimic the ways of an upperclass woman which brought her to the attention of Hannibal Adams. Hannibal likes to own fine things–cigars, liquor, people–because he enjoys  being the subject of other people’s envy. He recognizes Lady as something others wants and takes her for himself.

His treatment of her is cruel. For every gift that she receives, she pays dearly. Her only hope is to squirrel away enough money to buy or rent a small cottage far away from Mr. Adams. But as the story unwinds, you begin to wonder if she will survive to make it to that point. The world that Lady, and King, live in is one in which you can’t trust anyone because every person is trying to maintain their only little slice of autonomy.  When Mr. Adams makes an offhand mention that Lady is so good at pairing up his business acquaintances with other whores, the current madam of the whorehouse feels threatened and whispers things in Mr. Adam’s ear that makes him suspicious of Lady’s allegiance. Every day is full of danger for Lady.

King is a fighter. He’s got his own room in the whorehouse but he’s owned by Adams just like Lady is. As one of Adam’s prized possessions, he often comes into contact with Lady and he begins to develop feelings for her. He admires her bravery and her desire to survive. She’s the one person who “could understand what life was like as purchased property. Even if she did look at him like she knew all of his secrets and accepted him anyway.” And it’s King who comes to the insightful conclusion:

When the two share a kiss, everything changes for the two. Lady’s plans are accelerated and King faces a dilemma when an American proposes he throw a fight in a tournament that King has bet heavily in. The money could help the two escape, but if they’re found out? Or if the payment doesn’t come through? Then the two are as good as dead.

It’s difficult for the reader to tell who to trust in the book and there appears to be danger everywhere, even from those who purport to want to help or who appear to be friends of the main characters. With each word uttered, I wondered if the two were placing themselves in greater danger. It’s atmospheric and suspenseful.

Because of the great suspense, the ending was a bit of a let down. First, the two suffered so greatly I wish that their HEA would have matched their torment in intensity. Second, I had a hard time believing in the resolution of the conflict.  But this is a different type of historical. There are no titled characters, no balls, no frothy carriage sex. It’s a gritty story featuring two characters from the underbelly of society getting the HEA they very much deserve. B-