“Roller derby girl Gretchen “Honey Badger” Badgerton lives in the moment, no apologies. Like every woman in Pleasant Park with a pulse, she finds Dr. Jared Fine irresistible, but she’s taken by surprise when her unattainable new neighbor asks her out.

On paper, Jared is the perfect man: gorgeous, wealthy and charitable. But his golden image is just that, and opening an upstate practice is a welcome chance to start a new life. When Gretchen stops to help him with a flat tire, he’s intrigued by her feisty attitude—and her sexy body art. There’s something refreshing about being with a take-charge woman who doesn’t expect him to be anything but himself.

Though Gretchen is hesitant to shatter Jared’s “bad girl” illusion of her, she has to face facts: she’s fallen for the good doctor. She’s used to putting everyone else’s needs before hers, but as their relationship heats up, can she handle having someone take care of her for a change?”

A friend of mine told me that I had to read this book. I was hesitant but she insisted. After checking out the cover and reading that Gretchen is a) a roller derby woman and b) she’s covered with tattoos I decided that, yes, I had to read it too. 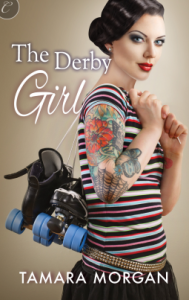 From the opening scene, I knew that this one was going to be different. A militant roller skating pixie meets up with an assholic, egotistical plastic surgeon and proceeds to put him in his place effortlessly. Poor Jared is thrown off balance when this tiny woman, who looks like her face has gone 10 rounds with an abuser, acts like she’s going to change his tire for him. I don’t think Jared is in charge of the relationship from that point on. Jared, bless him, does want to bust up whoever has done this to her before realizing what’s caused the bruising and blood.

Gretchen is such a breath of fresh air – to me and to Jared who seems bewildered by how (usually) easy she is to get along with. Gretchen doesn’t play games, Gretchen calls it like it is, Gretchen sees a problem and nails whoever is responsible for it and then doesn’t hold a grudge. She’s actually amused by Jared’s assness. Plus her tattoos and vintage/slashed clothes are great! But she has her limits of what she’ll put up with.

And Jared can be an ass. He knows it, his coworkers know it but he is amazed that Gretchen is willing to skewer him, explain why his latest action was assholic and then, when he’s fixed the problem, go with the flow again. Gretchen is unlike any woman he’s met. Gretchen gives him oodles of second chances and when he’s finally made her smile – truly smile – he feels like he’s won the lottery. I’m not sure though about a plastic surgeon with an abundance of free time on his hands. I guess in comparison to his 24 hour “on” life out in the field in the third world it would be easier but I’m sure this feeling won’t last long.

Sly, deadpan humor is what makes me happy so I was very happy reading this book. I love a lot of the secondary characters too – the cranky gran who isn’t the “cute old person” – she’s just cranky, Gretchen’s friend Caitlyn who shares her roller derby passion and the way Jared bonds with Wally during late night insomnia. I honestly thought I was going to bust a gut laughing during the dinner scene in the epilogue and, considering I usually despise epilogues, that’s saying something. Poor Jared was about to explode from apoplexy when Gretchen served up who he thought was the main course.

But some of the characters were underdeveloped to me. Gretchen’s sisters sort of morphed into one faceless “villain” and Jared’s dad showed up as fairly one dimensional. I also felt I was missing some backstory on Jared’s friends and his relationship with them. I understood it because it was spelled out but I didn’t “see” enough of it for it to mean much to me beyond annoyance at not understanding it.

Jared goes through some wrenching changes. Gretchen challenges him “to act better, to think more, to become worthy.” And just when he thinks he’s seen the light and “gets it,” Gretchen lowers the boom and spells out to him how little he still understands her and their relationship. It’s here when I also finally got why Jared had left his position with the humanitarian group to join his friends in their spa. Being a martyr and using the toughness of the job as a penance for all his past faults finally caught up with him after wearing him down for years as well as making him lonely.

But what finally saves the future of this relationship for me isn’t that Jared is no longer an assholic man – to some. But that he has changed for the better for his relationship with Gretchen however – and this is a big however – he’s not holding her responsible for keeping him changed. He’s committed to doing that himself and trying to make her happy even as he continues to see the real her, the person deep down and underneath her tattoos and faux bravado. Even as he helps her to finish herself, to reach for and obtain what she wants in life.

The romantic relationship had me believing in it and their future together. But the fuzziness of some of the secondary characters and feeling that I was missing some vital backstory detracted from my overall enjoyment. B-