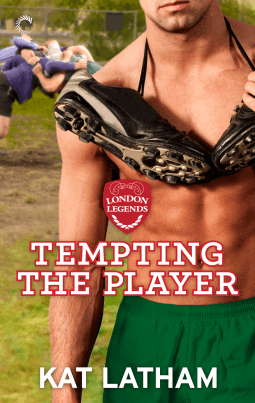 Libby Hart and Matt Ogden are perfect for each other—as friends. They’ve known each other for ages. They act as each other’s plus-ones. They even share custody of a dog. And if there’s always been a little spark between them, so what? It’s never been worth jeopardizing their friendship.

Professional rugby player Matt is fighting for a starter position with the London Legends—and that’s not the only thing he’s fighting. A crippling fear of flying means he’s struggling to get his career off the ground. He has no time for a relationship, even if Libby does make him ache. As an airline pilot, Libby’s looking for a stay-at-home husband so she can have a family without sacrificing her high-flying career. Matt’s certainly not that man.

But just because they don’t have a future together doesn’t mean they can’t have a right now. When Matt asks Libby for help overcoming his fear, they agree to take a vacation from their platonic relationship—whenever they fly together, they can have sex. It’s the perfect way to resolve all that built-up tension. As long as they can avoid getting a little too comfortable…

I’m always up for another Legends book. Reading about hawt, fit, yummy rugby players isn’t something I have to force myself to do. The set up for this sounded cute – shared dog and all – and since I’m not exactly eager to get into a plane either, I wanted to see what you’d do with that plotline as well. The middle might have dragged just a teensy bit but I liked how both Matt and Libby faced their fears and reached for what they wanted.

The book starts in a way that surprised me. Matt gets his moment to shine – and blows it. Wait …what … he’s a pro athlete and he buggers it? Okay, I like a hero who’s human and makes a mistake or two. Then he almost comes unglued on the flight back to London and I thought, wow, she’s given Matt some truly public problems to deal with as well as lingering issues from his past marriage and terrible father.

Meanwhile Libby gets some advice from her screwed up sister about going for a physical relationship with Matt in the standard romance “do him to get him out of your system” trope. Only Libby is as reluctant as Matt to risk their long friendship on something that might not work out. Still Libby is dissatisfied with her life and looking to make a change so when Matt asks for help with his flight phobia and she suggests a way to reward him for progress made that also gives her a bit of what she wants, I was on board with it. Yep, modern woman getting what she wants, sexually, and telling hero what she wants in bed? – I’m totally for that.

And Princess – well the image of this big, tough, muscle laden rugby player totting around a dainty little Chihuahua complete with a sweater and her favorite chew toy is definitely an awwwhhh vision. Any man secure enough in his masculinity to rescue a toy dog instead of going straight for, say, a bull mastiff wins points from me.

Matt and Libby both have things in their past to cause relationship issues. Libby watched her adulterous father break up the family while Matt’s first marriage crashed and burned. Serious things to contend with but I was glad that neither was uttering the standard romance line, “I’ll never love (again).” Instead they were suitably wary but not enough to run screaming. Instead they hesitated (for a while) based on their issues and as they worked them out (rather at length though) they came to know each other better, move towards freeing themselves of what made them hesitate and ready themselves for commitment.

I did enjoy seeing their friends-to-lovers story. I liked the glimpses of the characters from the past two books who graced this book in a way that kept the emphasis on Libby and Matt. I loved seeing Libby’s total confidence in the air and at her job. Princess is a doggy doll and I am looking forward to the next Legends story. If only the middle section of this one had moved at a slightly faster clip. B-