Your out of print 1984 novel, When Love Isn’t Enough (Harlequin American Romance #80), opens when three men return to the DC area from Texas, where they’ve been spending time on behalf of their legal firm. All three are lawyers who over the past ten months have put in many hours defending an oil company which had been sued by the Justice Department. 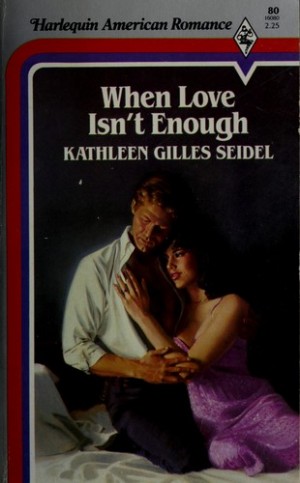 Dan Stewart returns home to find that his wife Sarah has taken their new baby and moved back in with her parents. Tim Keane discovers that his wife Mary has had an affair. Wiley Hunt’s wife Janet hasn’t cheated on him or abandoned him—at least not yet.

But Janet is angry at Wiley for putting so much more time into his career than into their marriage. Instead of sleeping with another man or leaving town, she refuses to cook for his homecoming, pours her energy into her own work as a senior writer at an ad agency, and generally ignores her husband’s return.

As the weeks pass, Janet and Wiley continue to drift apart, so much so they almost might as well not be married. Flashbacks show that the couple mets several years earlier, shortly after Wiley’s mother passed away, when Wiley was a young law student in need of a friend. He and Janet shared a house with multiple other housemates and it was from this seed that their romance blossomed.

Wiley and Janet are from different backgrounds. Wiley comes from a well-heeled DC family; his father is a prominent attorney to whom Wiley, an only child, has always looked up. Janet meanwhile hails from Mint City, Missouri. Her father is a vet and her larger family is more demonstrative and communicative than Wiley’s.

Wiley and Janet’s styles of communication don’t mesh well, and neither do their needs. Wiley needs to be recognized for professional success by being made partner, while Janet needs to feel needed, and therefore wants to start the family that Wiley’s demanding schedule allows little time for.

Janet and Wiley’s marriage is heading for divorce, until the day Wiley discovers that a client he represents has been polluting farmland and lying about it. Wiley is presented with an ethical dilemma that rocks both him and his marriage to Janet to their foundations. What choice will Wiley make, and what impact will his actions have on his and Janet’s marriage?

In an earlier review I described your books as down to earth. What I love about them most is how real the characters feel. Your characters are flawed and they have issues, but these issues are never milked for over the top drama and angst, nor do their conflicts ever seem too small to hold my interest. I think this has to do with the way you portray your characters’ psychology.

Here is an example from a scene in which Wiley and his father meet for lunch. Wiley’s father tells Wiley that someone mistook Wiley’s work on a recent law case for his own.

“I trust it wasn’t too painful.”

“Not in the least. I don’t mind hearing that people think well of you. I rather like it.”

Wiley opened the menu. He liked his father’s style—the understatement, the calm, the uneffusive way he had of saying “You are my son and I am proud of you.” The Barnums danced all over Janet every time she drew a breath—that family was so aptly named, they truly were a circus. Wiley preferred his father’s style.

“In fact,” Lee went on, “on Monday I was introduced as Janet Hunt’s father-in-law.”

“What?” That was a surprise.

“Yes, we had to talk to an advertising agency that might have been involved in setting up a slush fund. But that’s not the first time people have mentioned her to me; she is apparently very well-respected.”

Later they discuss the jewelry Wiley’s mother left for Wiley to give to a wife or daughter.

“And I hope you haven’t forgotten about your mother’s jewelry. There are some very good pieces. It’s yours and therefore Janet’s. Wouldn’t she like some of it?”

His father did not react. Wiley didn’t expect him to, since Lee Hunt never reacted to anything—that was part of the blue-chip, law-firm style—but Wiley could hear how surprising his own answer had been. For eight years all that lovely jewelry had been hidden in velvet cases in a dark safe-deposit box, and yet he had never asked his wife if she would like any of it.

“I understand why you gave none of it to her at your wedding.” Lee went on, providing an answer to the “Why not?” question that he would never dream of asking. “Your mother hadn’t been dead a year, and I know you were respecting my feelings—”

Both father and son knew perfectly well that wasn’t true, but they liked messy emotions to have tidy explanations.

“—but I wanted to assure you that that’s hardly an issue anymore. Of course, you may want to save them for your children.”

Now Lee was giving Wiley an easy explanation for why he might not want to give the jewelry to Janet at all. It was an extraordinary way to have a conversation, but Wiley was very used to it.

He opened the menu. “We really haven’t talked about it.”

This scene, like others in the book, presents the reader with a psychological mystery. Why is Wiley a snob about his own wife’s profession? Why hasn’t he ever, in eight years of marriage, asked Janet if she would be interested in his late mother’s jewels?

Wiley isn’t a bad person. Even as ambitious as he is, he sacrificed going to Harvard Law School to be at his mother’s side when she was dying of cancer. We can see that he loves Janet in the way he notice how others exploit her, in the considerate gestures he made when they were young, and in his fears that she will leave him. But something keeps that love from being enough.

Emotionally speaking, Janet has more on the ball than Wiley, and as Wiley begins to change the way he conducts himself, not just in their marriage but in the rest of his life, Janet serves as an example and a help to him. I always appreciate the competence of your heroines in the workplace and in the rest of their lives, and Janet is no exception.

But at the same time, I love that she too, is not perfect. Just when we start to think her purpose within the story is to be a role model to Wiley, we see she has made something of a mess of her own work situation, and has room to grow and change too.

Whereas another book might deal with work-life balance and its effect on a couple more superficially, this one delves deeper and answers the question of why these two specific individuals are struggling to balance the rest of their lives with their professions.

The book isn’t perfect; it is thirty years old and therefore somewhat dated. I was surprised Wiley hadn’t faced or expected to face an ethical dilemma at work before, since he was an attorney representing powerful corporations. As in many of your books, the introductory chapter feels awkward because of the wealth of exposition upfront. And though a supporting character considers getting an abortion, she doesn’t go through with it.

The sex scenes in the book are fade to black but I did not mind that at all. I read your books for the thoughtful explorations of complex relationship dynamics and of the impact family members can have on one another, as well as for the romance. Toward the end of the book, when Wiley’s epiphany came, I was so moved I cried. But this book made me think as well as feel, and for that too, I’m grateful. B+.