Recently I’ve been stuck at home due to a hairline fracture in my foot. To combat feeling cooped up, I turned to your debut mystery, Learning to Swim, which a friend had described as fresh and exciting. 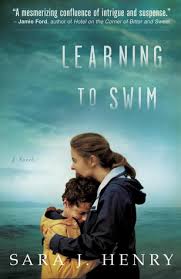 Freelance writer Troy Chance is taking the ferry from the Adirondacks town of Port Kent, New York to Burlington, Vermont when the opposite direction ferry sails by. Just then Troy spots what appears to be a child falling from the ferry opposite hers into the cold waters of Lake Champlain.

Troy, who has no children of her own (though she is a sort of den mother to the handful of male athletes with whom she shares her Lake Placid apartment) barely spares a second’s thought to the consequences before she dives in after the child.

She manages to rescue the boy, who is five or six and French speaking. The child clams up when she asks him what happened, who his parents are, and where he lives.

Troy is aware that no fuss was raised over the boy’s fall and no search for him has been announced. She recalls that a sweatshirt was tied around him, straightjacket-like, and realizes this was a deliberate attempt at murder.

If Troy reports his disappearance to the police and his parents are contacted, will the boy be safe once returned to them? Or are his parents the ones behind his close call with drowning? Afraid to take a chance with the child’s life, Troy takes him home with her.

In a matter of days, a deep attachment develops between Troy and Paul, as the boy reveals himself to be called. Troy realizes that it will be painful to part with him. But when Paul opens up to her about his parents’ identities, Troy realizes she can’t keep him with her, either.

Can the child’s father, once found, be trusted? Will it be a good thing for Troy to accept an invitation to stay in Paul’s life until he has adjusted to normal life? Is this a chance for a new romance, or is the situation far more dangerous than that for Troy, and for the little boy who has won her heart?

Learning to Swim did what I most wanted a book to do at the time I read it: absorb my attention fully. It’s a page turner and I was grateful for that.

Troy is a warmhearted protagonist. Her family background and lifestyle felt specific to her; she’d escaped Nashville and the family expectations she’d found suffocating there as a teen to go to college early, and then moved to Lake Placid where she made her living writing freelance articles and looking after an apartment with four other housemates.

Some of the small details–such as the mention of Troy’s leaving some dirty dishes in a bag outside the room door of a housemate who hadn’t washed his plates–made Troy come alive. The same was true of Paul, the somber little boy she’d saved. His physical gestures and his tendency to hide made him and his ordeal feel very real to me.

Most of the secondary characters also felt lifelike, but I had a problem with the way the villain’s actions were so very over the top. One thing that helped that go down easier was the writing itself—the dialogue was believable, and even when a character’s actions were out there, there was a normalcy to the way others reacted.

The prose had a simplicity that didn’t appeal to me but I can’t decide how much of that was due to the language itself and how much to the rather heavy-handed foreshadowing (which was especially pronounced near the end of each short chapter). Combined with the very evil villain and the child-in-jeopardy plot, these elements made me feel manipulated.

Then there was the way that Troy’s growth arc was played up in the narration. It’s true that Troy changed over the course of the story; she started out fiercely independent, and her attachment to Paul helped teach her to open up to the people who cared about her and ask their help.

I liked that, but at the same time, I felt more was made of this transformation than was actually shown. Troy kept saying she would never go back to being the same woman she’d been before rescuing Paul, so I wanted this change in her to be shown in depth, rather than just told about over and over.

I liked the sense of place employed throughout the book. Learning to Swim takes place in Lake Placid, Ottawa, and Burlington, and it doesn’t feel as though it could be set anywhere, but rather, located in these specific places.

This is primarily a mystery/suspense novel, not a romance, and the first book in the series too, but there are a couple of romantic possibilities for Troy. I was on board with the way this was handled in terms of what felt right for Troy, but at the same time, I’m not convinced that in a real life situation things would play out that way.

More important than any other relationship is Troy’s connection to Paul. The bond between them was probably my favorite thing in the story, and I loved the early scenes in which she rescued him and cared for him.

The latter parts of the book felt less organic to me, relying as they did on ominous lines highlighting the potential pitfalls for Troy and the dangers to Paul’s well-being and safety. While I loved Troy’s dedication to Paul, and liked Troy herself, I was less keen on the way these whiffs of menace toward Paul pulled at my emotional strings.

I didn’t guess the solution to the mystery. At one point I suspected it, but then I quickly dismissed this suspicion. I see the book as more suspense novel than mystery, because while there were clues and a solution, the greater emphasis was on the danger the characters faced.

Although I appreciate the compulsive readability of this book, its sense of place, the touching connection between its protagonist and the child she saves, and the detail employed to bring the characters to life, I was disappointed by the manipulative elements and the lack of d real depth.

The novel is worth the price I paid for it on a daily deal, but I’m on the fence about paying full price for its sequel. Taking all of the above into account, I’m going to give it a C+.