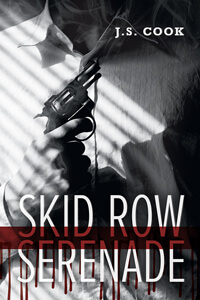 In the tradition of novel noir, nothing is ever quite as it seems.

Novelist and war hero Tony Leonard sees private investigator Edwin Malory being mugged outside a seaman’s mission in downtown Los Angeles, so he takes him home and gives him clean clothes and access to a hot shower. It doesn’t take him long to discover Malory was hired by wealthy industrialist Linton Vanderbilt Stirling, the father of Tony’s estranged wife, Janet. The reason for this is simple: Tony’s father-in-law suspects him of drinking away his daughter’s personal fortune.

On a whim, Tony drops in on Janet one night and finds her naked, dead, and tied up, her skull beaten in. Horrified, Tony flees the scene, knowing that as her husband, he is the number one suspect in the killing. He sees only one way out. He needs to fake his own death.

And who better to send his “suicide note” to than Edwin Malory.

Dear J.S. Cook, there was a time in my life when I read a lot of Raymond Chandler in Russian translation, so while I cannot claim extensive knowledge of the noir mysteries, at least I can claim to be somewhat familiar with one of the classic writers of the subgenre. I read some of your work in the past, but have not read anything for a while so I was curious to see whether this story would make me want to come back or not.

The story is dated “California, 1947”. Let’s talk first about what I really liked – the chemistry between Tony and Ed. And that *is* important to me in a Romance, or in a story that has a Romance storyline, and this one surely does. If a classic noir mystery had had a gay romantic storyline, I could absolutely see the characters communicating the way Tony and Ed did. For me it felt restrained enough, and I could feel sexual tension between them whether they were in bed or not (there are several sex scenes which I quite liked and I thought they were important to the story). Tony narrates the story in the first person and I thought he was effective at conveying Ed’s feelings to the reader, not just his own.

“Not at all,” I said. “If you can pick apart this particular Gordian knot, I’d be grateful.”

Ed took another drag off the cigarette.

“Cut, you mean. The Gordian knot was cut.”

“Cut.” I gave him back the yellow envelope with the tickets. “And by the way, I’d love to go with you… if you still want me to.”

I did all the right things, made all the correct romantic gestures. I even brought flowers when I showed up for our date, a huge bouquet of heliotrope. I didn’t even know if he liked them, but they were my favorite flower. He answered the door on the first ring. “Tony. Flowers.”

“Very good,” I said. “You’re beginning to master the language.” I closed the door behind me and pushed him up against it. He tasted like heat and good scotch. “Sure we haven’t got time…?”

I also really liked Tony and Ed as characters, but I had an issue with something in the Tony’s backstory. The blurb reveals that Tony is an alcoholic, and under the spoiler cut I will discuss why he is an alcoholic, according to the narrative. SPOILER.

During the war Tony was a part of British commando unit. He was captured by Gestapo and they tortured him for *a year*. There are three scars on his face, but the way he describes it, as a significant improvement over what his face looked before, it must have really been even worse. I also think that he has lupus (what he describes as such – that some doctors started calling it that or similar word) and because of this he thinks he is going to die soon. I have read and watched a lot about those times. It is almost impossible for me to imagine that somebody could survive Gestapo torture for a year. Note, I did not say that it did not happen – my search included Googling and Yahooing, but I did not go to the library and check out books on this subject, so it could have been happened that way. However, I have discovered the testimony of  women who survived Gestapo torture for a week and two weeks, but please make sure you have an empty stomach before you decide to click on this link.

Basically what I am trying to say is that I personally do not understand the artistic choice of having Tony go through something which is so hard to believe. Once again, miracles happen, and since I found no proof to the contrary, it could have happened that way, but based on what I know about Gestapo, it is not believable even if true, because they usually got people to the breaking point (or dead) way faster than a year. I started to wonder if this choice was just made to make Tony’s backstory so much angstier that way. And hey, it’s easier to explain his alcoholism away that way – of course he could not forget what he lived through and he really wanted to, I totally get that.

So there was that, but I am not downgrading based on what I wrote under the spoiler because although this is an artistic choice which did not work for me, I thought it was integrated well within the story.

Of course there is mystery here which is just as important to the plot as the romance is, if not more; it was probably fifty/fifty split.  The blurb tells you what the mystery is about – Tony wants to find out who killed his ex-wife — but I am not going to talk much about that. I am just going to say that besides Tony making a couple of idiotic choices in the beginning, I really liked how it was executed and was even surprised by the couple of revelations. And I really liked Tony’s voice.