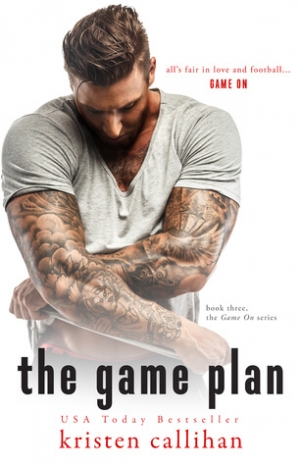 The Game Plan takes place two years after the events of The Friend Zone; Ivy and Grey are married and settled in San Francisco and have a new baby, Leo, who is keeping them awake.  Drew and Anna (from The Hook Up) are based in New York and planning their wedding. Ethan “Dex” Dexter is playing centre for a New Orleans NFL team and Fiona Mackenzie, Ivy’s sister, has finished college and moved to New York to pursue interior design, while dabbling in furniture making on the side. Both Dex and Fi end up in San Francisco visiting Grey, Ivy and Leo at the same time and while there, Dex finally makes his move.  He’s been gone on Fiona ever since he first met her but at the time she was too young and was dating someone else anyway. But he can’t resist her anymore and Fiona discovers there’s more to this big quiet man than meets the eye.  Dex tends to hold up the walls at parties and say little in conversation, but they connect and Fiona gets to see a side to Dex that he rarely shows.

I adore reading about a hero who is completely head over heels for his lady. Add to that Dex is a virgin and he has piercings (plural), well, my good book buttons were pushed with gusto. I just about wore out the highlight function on my reader with all the wonderful things he says to Fiona. He’s basically already in love with her and when he decides to go for it, he holds nothing back.

It’s a struggle to find my voice. “Neither of us is looking for casual. We don’t even live in the same city. I don’t date athletes. Or friends of my sister. Or—”

“Why don’t we start with what you do,” he cuts in, his gaze direct, firm. It lowers to my mouth before sliding back up to my eyes. “Do you want to kiss me again, Fiona?”

Why does he have to say my name that way? As if it’s a dare. And why is he so damn perceptive?

His eyes bore into me. “Did you think about me last night? In your bed?”

No one has ever been so blunt with me. Ever. It does my head in, giving me no place to hide.

“All I’m asking is for the truth,” he says, his big, strong body rock solid in his chair.

Licking my lips, I try to breathe. Truth? I can do truth. It’s not so hard. Right?

One of his dark brows rises. “Yes to what?”

If I have to elaborate, I might expire on the spot. “Does it matter when the answer is yes?”

He smiles, and it’s like the dawn cresting over the sea. “When it comes to you, Fiona, the answer always matters. But I’ll take that as a yes to all of the above.”

Fiona has the reputation in her family for being flighty, but Dex sees something else in her.

“You seek joy in your life, don’t you, Cherry?”

I shudder, my fingers curling around his hand. He still has me pinned. “Yes.”

He smiles against my mouth. “You were never quitting. You were searching.”

I don’t know why I’m saying this. Maybe I want to test him. Maybe I just want to know he believes in me. All I know for sure is that trickles of ice-cold fear run down my spine at the thought of ever ending things with Dex.

Rolling me to his side, he peers down, those eyes of his searching my face. His teeth flash, framed by his pirate’s beard. “Nope. That was just another search.” He leans in, nips my ear. “The search is over, Cherry Pie.”

Fi is initially reluctant to get into a relationship with Dex because they live a thousand miles apart and, during the football season, Dex has little free time anyway. She doesn’t think she can do a long distance relationship. But Dex is very persuasive and soon Fiona is in the same emotional place Dex is.

They have a lot to work through; Fiona is being gaslighted at work and this is stressing her out. Dex and she need to work out a way to maintain a relationship with they’re so far apart, and the media has got a hold of the juicy news that Dex is (or was, they just don’t know it yet) a virgin.

He kisses me again, a little deeper, nipping my lower lip. With a grunt, he grips my ass and tugs me closer.

“And you sure don’t act like one,” I whisper breathlessly.

“Guess I forgot to read the virgin handbook.” His voice is husky against my skin. “I’ve had a lot of time to think about what I’d do with you once I got my chance. Vivid, detailed plans, Cherry.”

Just when things are looking like smooth sailing, after most of those issues have been ironed out satisfactorily, the shit hits the fan and suddenly Fiona is in the kind of spotlight no-one wants to be in.

I was so invested in this couple that my heart kind of broke for them. I had to keep reading until they were out of the ditch because, in my world, if I haven’t read it, it hasn’t happened yet. And I just couldn’t leave them in a bad place for a second longer.  There is a lovely happy ending but I will say that I wasn’t quite over all that went before by the time it arrived. I’d have liked to have seen how Fiona and Dex were managing and had a bit more page time to put the bad stuff behind me to really settle into the ending. I realise that would change the pacing and probably that would be bad, but even a few paragraphs about how things gradually improved (I assume it was gradual and not overnight; I assume there were ongoing issues they had to manage together) would have given me some comfort. As it was, it seemed a little like the fix was a “magic pill” and everything got better basically straight away. I don’t think it works like that.  (I am being vague about what the bad thing is because spoilers, but I will say it is an external conflict which Dex and Fiona have to work through and deal with.

Unfortunately, the ending fell a little flat to me because I wasn’t quite over all the “bad stuff” yet. I was still seeing (in my head) all the horrible things and hadn’t had enough time to “move on”. The Game Plan was heading to an A grade because of how much fun I was having and how invested I was in these characters and how much I just plain adored Dex. I was so glad that Fiona gave him all the love and he gave it right back, but because I wasn’t quite ready for the HEA, I’ll go with a B+.  It’s still an absolutely recommended read.  The way you write contemporary just hits all my good book buttons and I love your characters. Your conflicts are modern and realistic and your heroes are super-swoony. And your covers are excellent. It’s a wonderful visual for Dex actually – you certainly did your homework there!

I’ll leave readers with one more quote from Dex which kind of sums up why I loved him. (Also, I have a thing for a neatly kept beard. Just ask my husband.)

“Cherry, let me lay this down for you. I’m all in. I want you. I always have.” That voice of his goes deeper. “You going to let me have you?”