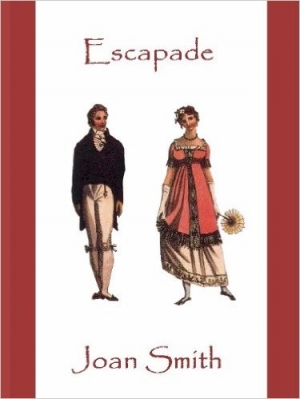 Ella Fairmont, as the anonymous Miss Prattle, has taken the Duke of Clare to task regularly in her gossip column. The duke, unsuspecting, includes Ella and her aunt in his week-long country houseparty. He has also included the blue-blooded Lady Honor, the strikingly beautiful Miss Sheridan, and the multi-talented Miss Prentiss. How could one “ordinary” young lady with a sharp tongue compete with three sterling debutantes?

This one took a while to fully engage me. Considering I haven’t had much luck in the last few of your books I read, I was getting nervous. “Escapade” is listed as one of your best and I was worried that if this caliber story wasn’t working for me, my love affair with your books was in serious trouble.

First off the bat, this one isn’t LOL hilarious as are “Aunt Sophie’s Diamonds” or “Reluctant Bride.” No, it starts quietly, almost diffidently. The hero doesn’t come off as any great catch despite being a Duke. In fact, he’s rather off-putting in bluntly stating his opinions on others. Ah, but there’s a reason for it and more on that later. Meanwhile the heroine is a secret on dit reporter who, as the Seasons go by, finds herself less and less interested in finding a husband as she grows to view men merely as subjects to pick apart for her column.

When news circulates among the ton that Clare has invited three debutants plus mothers and some of his friends to his Castle for a week, Ella mockingly announces that it will be a modern day recreation of Paris’s awarding of the golden apple with the apple being the position of his Duchess. As an old friend of Clare’s, her aunt Sara maneuvers an invitation for them in order for Prattle to be able to secretly cover the occasion. The festivities start with a thud.

Clare doesn’t suffer fools and Ella’s shyness initially relegates her, in his opinion, to a brown mouse. The antics and foibles of the other contestants – um, candidates – for the marriage prize do little to make his long suffering week look to be any shorter. His mother wisely presides at dinner and makes herself scarce otherwise. I will admit to loving the Duchess who can skewer the debutants in that frightfully understated British way.

Then something happens. Ella gets fed up with Clare’s lack of attention and enthusiasm for his guests – which I found astonishing too – and realizing his opinion of her, she relaxes and becomes her sly tongued self. She thinks she doesn’t have a horse in this race so … why not? Slowly, and to his own amazement, Clare begins to see the true woman hiding behind the acceptable face and not bad hair. She’s not as beautiful as one guest nor as openly, yet stridently, determined to thrust her mediocre talents before the guests as another nor is she the aristocratic daughter who announces what she will and won’t do – that is when that one bothers to talk at all. 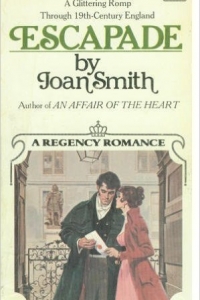 No, Ella is something different and, as Clare comes to appreciate, someone special. His mother quickly cottons on too, in fact even before Clare does. She and Ella share a love of novels and delight in roaming Clare’s well stocked library as well as exchanging recommended reads to each other. Seeing Clare in close quarters, Ella starts to realize why he’s as sharp tongued as he is due to the toadies all around him and women hurling themselves at him all because of his unexpected position. As the second son who never expected to inherit, he’s seen people do a 180 in their fawning over him and he reserves his time and good opinion for those who know him or get to know him for himself.

Unfortunately some sand must be mixed in the Vaseline of the romance and it comes in the form of a nasty column Ella dashed off in a fit of pique before she knew the full story behind some of Clare’s actions. I am impressed that when she realizes the truth and the disservice she’s done him, her first thought is dismay at how she’s publicly wronged him rather than worry about any possible damage to a relationship. Clare doesn’t help the relationship along any when he publically botches his true feelings while attempting to dodge the expectations of one of the other young women.

The revelations, when they arrived, came in a way I both was and wasn’t expecting. They arrived at a bad time and weren’t intended but Ella is the one who breaks the news to Clare that she is the ill-bred, scrivening “It” who has taken such delight in vexing the ton in general and him in particular. When the news is finally leaked in London, unfortunately Ella returns to her usual default instinct to flee the scene – in that she’s consistent. Never mind that Clare puts his reputation on the line to help her save face and brazen it out or that her flight would heap scorn on her beloved Aunt Sara.

She does eventually stick it out at Almacks and prettily apologize to Clare for the untrue thing she smeared him with but I couldn’t help but feel “Lady, you were willing to dish it. Now face the consequences like you’ve got a backbone.” In his actions to shield her, Clare shows that his love and feelings for her are true even after what he learns. I just wish I felt that hers equaled his. I also wondered that Clare’s long time friend Sara, Ella’s aunt, would have not said anything to Ella about the many slings and arrows Ella hurled his way before the week at Clare Castle. Given their close friendship, it just seemed odd that she would not come to his defense to some degree.

Since it’s a trad Regency, the heat level is low and sex is nonexistent. I also noticed what are probably some anachronisms such as poison ivy in England, clothes on hangers, the phrase “tripping the light fantastic” and use of the word zombie. While the word probably existed then, I have my doubts that the English ton would casually toss the word about in the early 19th century though I could be wrong.

Ultimately, this is a hard book to grade. Parts of it are wonderful though in honesty parts drag a bit. Clare grew on me to such an extent that I ended up admiring him a great deal. Ella has her moments as well but in the end, I didn’t finish the book feeling that she was his equal or worthy of him. B-

On a personal note – while I’m delighted to see these older books rereleased, I’m still debating what I think of the newer covers vs the old ones.