While waiting for the next “Lady Julia” mystery novel, I noticed that this little novella is on offer for the Christmas season. It’s not long, it’s not complicated and it’s not that different from any other Lady Julia story. If readers like this world and it’s people, it should be a nice little nibble to devour in an afternoon. But they shouldn’t look for new situations or a different direction for Julia and Brisbane. 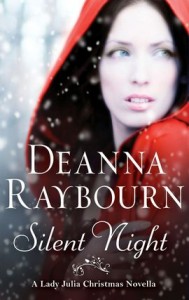 Despite her initial plans to spend the holiday in Italy, Julia, Brisbane and their assorted menagerie find themselves headed towards Bellmont Abbey for a March family Christmas. The other usual suspects are with them – Portia plus Jane the Younger and dogs – or will be soon – Plum and his waistcoats. Julia’s plans to stay separately at the Rookery are dashed by a large oak demolishing the roof of the little dower house her father had gifted her with. Stuck at the Abbey she and Brisbane soon discover that all is not well. The butler is in the pantry with the best brandy, half the staff are sick, there’s been a new ghost sighted and soon tiny, but expensive, items begin to go missing. And what is the reason for her father’s foul mood? Julia is determined to solve the mysteries and continue to wind Brisbane around her little finger.

I almost hate to say it but this novella is verging on a parody of the Lady Julia oeuvre. Half of the March family will be home for the holidays and those who are traveling there are loaded down with more animals than there are at the London Zoo. Plus Jane the Younger is teething and squalling, Brisbane disagrees with Julia wishing to investigate, Portia is overbearing, Plum is slightly waspish, the Abbey staff are at sixes and sevens and Julia is alternately playing Lady Bountiful to the staff and using sex to manipulate Brisbane.

Honestly, there’s nothing new here. The mystery is fairly easily solved just by following the trail of stolen objects, Lady Julia sticks her nose into every one’s business, Brisbane glowers in between intensive marital bouts in bed, Jane the Younger screams, animals create mayhem and the Earl acts Lord of the Manor. Well, he is Lord of the Manor but you know what I mean. As a filler until there’s a new novel, it’s fine if a trifle familiar in every aspect and most details. B-