Grace Barnum’s life is precariously balanced on sensible choices and uncomfortable compromise. She dutifully edits textbooks that, she fears, may be more harmful than helpful to kids. She is engaged to a patent attorney who is steady and reliable. She has a cautious relationship with her fascinating father, a renowned New York painter, and she prefers her mom slightly drunk.

Always a planner, Grace feels prepared for most eventualities. Until the responsibility-challenged Tyler Wilkie shows up. Fresh in town from the Poconos, Tyler has warm eyes, a country drawl, and a smile that makes Grace drop things. Worst of all, he writes devastating songs. About her.

Tyler reaches something in Grace, something she needs, but can’t admit to. Something she wants, but won’t succumb to. Tyler Wilkie loves Grace Barnum and ruins everything. And Grace grows.

I have a weakness for sensible heroines so the description of Grace Barnum called to me. Grace also seemed like she is a little buttoned up. A little in need of having her life ruffled a tiny bit and, if things don’t get out of hand just to get out of hand, I enjoy seeing this happen in a romance. Also the dogs on the cover seemed to promise fun in Central Park. Well, it turns out that the dogs in the story are actually giant schnauzers and that they don’t play much of a role once their presence has introduced Grace to Ty Wilkie – part time dog walker, wannabe musician and the man who wrecks Grace’s orderly life. 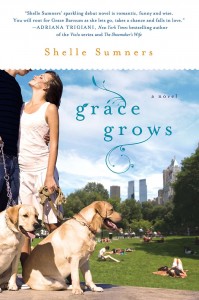 Since this is a first person POV story, I needed to like Grace and at first I did. She’s funny, she’s smart, she hauls enough around in her huge carryall to save the world and she’s a practical enough woman to win my enthusiasm. Grace isn’t drowning in angst or prone to pratfalls or looking for a hot night of smoking sex for what ever fill-in-the-blank reason so many contemporary heroines seek out bad boys. She and Ty are friends first – though it’s fairly obvious that Ty is smitten with her from the start. She has an almost fiance who finally romantically pops the question, a job she mostly enjoys, friends to go out with and quiet places to recharge her batteries. She’s something that is getting to be a rarity in romance novels – a nice, well adjusted woman who isn’t thinking of doing something outrageous. Grace is a breath of fresh air.

Grace’s romantic choices in life make sense given her parent’s acrimonious marriage and years of avoidance. She wants steady, she wants nice and she doesn’t want to risk her heart. So when her attraction to Ty begins to grow, she fights it. He’s an artist, like her father, and Grace knows how that marriage ended. She’ll stick with patent lawyer Steven. That is until her heart finally recognizes the truth and she is honorable enough to be honest with Steven. I admire Grace for that but this is about the time that I sense impending trouble. Grace is so sure that Ty would never be able to give her the type of marriage she now wants – since her eyes were opened up – that for months she won’t even give him a chance. That is until the itch becomes so overwhelming that there’s nothing to do but give in and scratch it.

Now comes the part when I want to join Grace’s friends in shaking her. True her actions are a product of her background and the little bits of believable circumstance that make up this section of the story plus the growing we’re promised in the title has to occur but honestly, Ty is much more forgiving of Grace than I could be. Her friends want to shake her, her family wants to shake her, Ty’s family wants to shake her and all she can do is whine about how she thinks things could never work out between she and Ty.

This is a book that I didn’t want to put down or stop reading. But it’s also a book that I wanted to like more than I actually did. It has funny parts – some were LOL like where Grace tells off Ty’s dickhead cousin Dennis, it has poignant moments – such as the reaction of all the various adults to baby Jake, it has realistic stuff but waiting for Grace to grow takes a lot of patience and mine wore thin by the end. C+