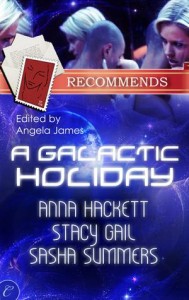 When looking around at the holiday offerings this year, I saw this anthology from Carina Press. It was a complete stab in the dark for me as I knew nothing about any of the authors and SF/futuristic usually isn’t my thing. Perhaps having no expectations allowed me to just read in the moment but I finished with some new authors to watch out for. The anthology is available for purchase as a whole or the novellas can be bought separately.

A detective who refuses to modify her body teams up with her cyborg rival to track down a burglar who is putting toys into homes. A solitary ice miner finds love and friendship while stranded on the surface of Galileo. And two hardheaded negotiators put their differences aside to evade an assassin and save their planets.”

How the Glitch Saved Christmas by Stacy Gail

A stubborn non mechanized detective and an equally stubborn and madly in love bodmod detective discover in each other the happiness and joy of the season they each thought lost.

The story utilizes a ‘not totally dystopian’ near future world and is done well. There’s enough here that’s familiar mixed with enough to suggest futuristic developments without going overboard about it and letting this take over the human interest aspect of the story. The initial friction between Raine and Wicke is over their advancement in the Chicago Police Department which then shifts to the fact that Raine keeps resisting the department directive to get bodmods. Her reasoning is presented and makes sense just as Wicke’s decision to use the new technology to allow himself to be a better cop also makes sense. Pros and cons on both sides lead to each understanding the other’s position and being at peace with it.

Both are shown as good cops, intuitive and determined to solve the somewhat strange crime that’s been reported. The resolution adds a neat touch to their discovery of each other and love when they find the spirit of trust and Christmas giving from someone who shouldn’t have these at all. Oh, and I love the title of the oft mentioned Christmas carol, “Gimme, Santa, gimme.”. Are there words to this?

The story feels complete without being rushed and as a tech holdout myself, I could appreciate a heroine who is described as a Luddite. B

An ice miner now stranded on an frozen outpost planet discovers love with an enigmatic man of mystery amid the strange holiday celebrations of the settlers who live there.

I am in shock and tickled pink to have gotten two great stories in a row. Perhaps I need to be reading more SF?

Again the novella feels complete and unrushed which is a rarity in anthologies. Usually either there’s not enough space to give a full story or I don’t get fully engaged in the novella because there’s not enough to make me care. Here I get a full world experience, a love story I believe plus a holiday story of sorts. It’s kind of a mix of Thanksgiving and Christmas but that’s fine and makes sense as it’s presented and the way these people celebrate these holidays is the way it ought to be done. The world building is detailed enough for the needs of the story without either over or under doing it. The setting is totally off Earth but with distant echoes of what we know so as not to feel totally strange.

I liked the twist of characterization of Riley and Leo and will admit that when I read the novella description, I got the placement wrong. Here the social hero must woo the skittish heroine who has to be persuaded that a relationship is a good thing. It’s got tension, excitement, enough that’s different to capture my imagination, a heroine who is skilled at what she does – and makes no apologies for that – plus a yummy hero who obviously falls for her immediately. And appreciation for books! And food! A-

She’s a tough planetary negotiator but he thinks he’s tougher. She already dislikes him due to a past conflict while he won’t let anything stand in the way of winning a coveted promotion even if he does insist on negotiating during her planetary holiday.

I had hopes for a trio of excellence but alas, for me it was not to be. This one has an interesting start with an uber controlled hero who seems like he will be matched by an equally strong, though more openly emotional, heroine. There is much at stake and an already established conflict that is real and not manufactured. Then the hero arrives on the snow planet. Sparks of dislike and disdain fly until an outside force pushes these two together in life or death peril. With all that, this one should have worked but this is the story which annoyed me.

Perhaps because the strong heroine has turned wimpy in the face of danger – to the point where the hero has to yell at her to snap out of it (shades of Moonstruck) and help them survive the cold conditions of her damn planet. Perhaps because the heroine is ogling, to the point of inertia, the shivering hero while she’s stripping him to warm him up. Even she realizes she needs to stop this. Then after time together, she can tell that he’s just aching to be loved. This description is repeated and each time it made me imagine a lost puppy rather than an adult man. Finally the hero then starts to go emo – way emo. To finish, a standard final conflict drags the story out to an equally standard resolution. C-