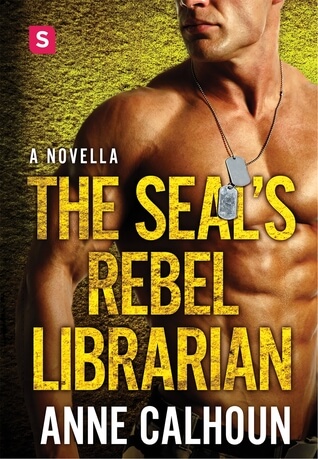 It’s no secret I’m a fan of your work. The previous novella in this series, The SEAL’s Secret Lover, was, for me, missing a little something which linked the “hey you’re hot, let’s hook up” and the “let’s get married” but I still enjoyed it.

I enjoyed this book too but at times it was a real struggle. Not because of the story or the romance, but because of the editing. Or, I should say, the lack of it. It is, however, a digital release, so a corrected file can easily be uploaded to etailers, and other readers might well then have a better experience than I did. You should get right on that St. Martins. Seriously.

So I’m going to talk about the bad editing and give examples but I really hope the publisher fixes the file because the book deserves better. For me, these kinds of errors throw me so far out of the story, it’s difficult for me to get back in. In fact it took me four nights to read it. It’s an 87 (ish) page novella. I could usually knock that over in one night.

The good news is that the editing issues are mostly in the first 30 pages or so; the last portion of the novella was much smoother and I was finally able to relax into it.

And speaking of, let’s talk about the story first.

Jack Powell played a large role in The SEAL’s Secret Lover, even though he didn’t actually appear in the book, so I was glad to get to finally meet him. He’s a former navy SEAL who left the teams after watching one too many teammates bleed out in his arms. He developed PTSD, the bulk of which seemed to manifest itself in an inability to sleep well and a tremor in both hands. Jack had accepted a job at Grey Wolfe Security, based in Istanbul, but had to bail when he realised the tremor made him a liability rather than an asset. All his life, Jack has relied on his body. It has never before let him down. He feels now, that it has betrayed him. He feels weak and this is something both unwanted and unfamiliar.

As part of Jack’s “therapy” he has enrolled in some college classes for veterans. (He has actual therapy with a counselor too.) For his Psychology 101 paper, he has decided to write about PTSD and the best available treatments. Which is where our heroine comes in.

Erin Kent is a librarian at the college library. She is 34 and (relatively) recently divorced. Looking back, she realises she was stifled in her marriage and that she had sublimated her own needs and desires in deference to her (ex-)husband’s. Now, she’s going to live large and do all the things. Her list includes buying a motorcycle, parachuting and dating. She plans to start with the motorcycle and work her way up to dating.

When Jack approaches Erin in the library for help with research for his assignment, there is an immediate attraction. Erin declines Jack’s offer of a coffee date because he is a student and she is staff and because he is younger than she.  (Actually, the staff/student thing is never really addressed but because of how the story ends, I decided it probably didn’t need to be.) The age difference isn’t a thing which bothers Jack at all and after her initial reluctance, Erin drops it as well.

When they meet again at the local Ducati dealership, Jack gives Erin an assist with an overly patronising salesman. And Erin, tired of being the good girl who never takes a risk, invites Jack to her place for “coffee” which is, of course, not coffee at all.

They agree to keep things casual. She’s not ready to seriously date and he is planning on getting better and then moving to Istanbul. There’s no future in their fling. (Yeah, of course.)

One of the things which is still a sore point for Erin in her failed marriage is her ex-husband’s accusation that she “broke her promise” (ie the marriage promise of “til death do us part”). It is terribly important to Erin that she be a person who keeps her promises – both to herself and others. Her promise to keep things casual with Jack comes back to bite them later.

Over the next little bit, Erin and Jack meet regularly for hot sex and he helps her with her motorbike purchase and with riding. She has done a beginner’s riding course, but he gives her tips and advice about her bike, including practical lessons on an old, unused runway. He also helps her with her parachuting dream; as a SEAL he has plenty of experience and a tandem jump is easy peasy for him.

I don’t think it’s a spoiler to say that they both find themselves in far deeper than they anticipated and they each have to decide what to do about it.

Jack and Erin have frank conversations about their struggles and their dreams and I did think they had a future together. I was definitely happier with the progression of the romance here as opposed to the first book. I felt like I didn’t miss any steps in this one.

The PTSD storyline was front and centre but I think because of the story length, it didn’t quite get the attention it needed.  I’m not an expert, but the sudden recovery didn’t entirely make sense to me. Perhaps that is how it happens though. I was fascinated by Erin’s insight into the link between mind and body and how something which disturbs the mind will often be felt first in the body.

“…but the truth is that it happened in my body before my brain caught up with it. Like my body knew before I did that something was wrong.…”

This physicality is emphasised time and again in the story.

I liked Jack and Erin together and, once I was able to move past the editing issues, I enjoyed the story. Their connection was strong and not just on a sexual level.


Which brings me to the editing. *sigh*

In the first chapter, Jack is driving his sister’s car.

Jack Powell parked Rose’s BMW 3-series at the back of the lot next to his therapist’s office building, safely away from door dings.

While waiting in the car park:

He thumbed in a text.

The reply came before he had his helmet off.

Why was Jack wearing a helmet while driving? Is he the Stig?

He swung his leg over the Ducati’s seat and texted his sister while he walked into the nondescript two-story building situated just off Lancaster’s main drag.

Hang on. Now he’s on a bike? I guess that explains the helmet at least.

His shoulders, helmet, and backpack threatened the water cooler and the tiny table stocked with tea and hot cocoa.

So, now he’s in the therapist’s waiting room, still with a helmet. Okay.

After the appointment however, he:

got in Rose’s BMW and drove over to Grannie’s.

Using his spare opener, he opened the garage door to find her sensible Toyota Camry missing, giving him an unimpeded view of his dust cover-shrouded bike. For a long minute he stared at it, listening to his body.

Yes. This was exactly where he should start.

He swept the cover off the Ducati 1099, neglected over a long winter.

And then there was the first sex scene. I know, because the text tells me, that Jack is “not tall” and also, that Erin is “tall for a woman”. They are standing up, he is clearly taller than she, at least a little bit, because he bends his head to kiss her. So that’s the set up. This is what the text says:

“Oh, fuck,” he muttered again, and bent his head to kiss her.

His mouth was temptation in flesh, warm, full, borderline pouty lips against hers. His cock still firmly in her hand, she parted her lips and felt his tongue slip inside to touch hers. His hands cupped her breasts, brushing his thumbs over her nipples, then coaxed the straps from her shoulders. The fabric sagged a little, baring the upper curves and swells. Still gripping his shaft, she stepped forward, nestling his cock against her upper abdomen, framing the head between her breasts.

I’ve tried. I’ve spent hours – there have even been diagrams – but I can’t get this to work. Unless Erin has a ridiculously long neck, like a giraffe. And really short legs.

These things read to me like there had been changes from a previous version but no-one had read through the whole manuscript to make sure it all fit together properly. Sure, the author has some responsibility here but… isn’t that was editors are for?

There were a couple of other things too but I’ve banged this drum enough. It’s difficult for me to discount the effect on my reading enjoyment the sloppy editing had. I’m not sure I can actually. I know I’d have enjoyed the book a lot more had the editing been smooth (like, perhaps, the excerpt from the full length novel due out later this year which I am all over by the way). The romance worked better for me here than in the first novella. While I had some quibbles with certain aspects of the story, I liked it. Let’s call it a B-.