REVIEW: Lost Among the Living by Simone St. James 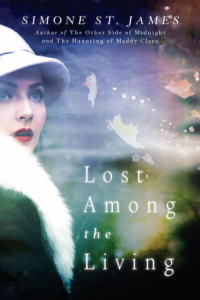 England, 1921. Three years after her husband, Alex, disappeared, shot down over Germany, Jo Manders still mourns his loss. Working as a paid companion to Alex’s wealthy, condescending aunt, Dottie Forsyth, Jo travels to the family’s estate in the Sussex countryside. But there is much she never knew about her husband’s origins…and the revelation of a mysterious death in the Forsyths’ past is just the beginning…

All is not well at Wych Elm House. Dottie’s husband is distant, and her son was grievously injured in the war. Footsteps follow Jo down empty halls, and items in her bedroom are eerily rearranged. The locals say the family is cursed, and that a ghost in the woods has never rested. And when Jo discovers her husband’s darkest secrets, she wonders if she ever really knew him. Isolated in a place of deception and grief, she must find the truth or lose herself forever.

And then a familiar stranger arrives at Wych Elm House…

Yes it was a reference to your books being like Mary Stewart’s that caught my attention plus the cover of the woman who looks like she’s got something to be worried about. It’s such a nice cover that it appears to be being used on several books but hey, it worked. Anyway, woman in danger, missing hubs and strange goings on in a post WWI setting called my name.

The war has been over for three years but the world Jo Manders knows is still awry and only slowly settling into its new normal. She’s in a legal twilight of neither widow nor wife as Alex’s body was never found after his crashed plane was discovered. Left with little money and that now run out, she’s started working for Alex’s demanding aunt as Dottie methodically combs through the continent snapping up artwork from cash poor aristocracy and Old Money.

After their return to England and arrival at Dottie’s Sussex home, Jo finally encounters Dottie’s drunken lech of a husband and poor wreck of a son. The one family member Jo knows she’ll never meet is Queer Cousin Fran, the mad sister who committed suicide during the war. Or so Jo thinks and is told. A visit to Dottie’s unsettling lawyer fills Jo in on some of the details of Fran’s horrible mental illness symptoms while at the same time subjecting Jo to an uncomfortable hour long assessment. Jo feels for Fran as her own mother has suffered from debilitating mental illness for Jo’s entire life.

As the weeks go by, Martin and Jo develop a friendship as Jo learns of Martin’s wounds and morphine addiction. Since Martin hero worshipped his older cousin, he does his best to deflect his mother from Jo. Soon however the already eerie atmosphere gets positively frightening as strange things begin to happen and Jo is haunted by terrifying dreams. Given her own mother’s illness, it crosses her mind – more than once – to wonder if she is also showing signs of early mental illness. This section and later bits are truly scary – enough so that I didn’t want to read this before going to bed.

Is it her mind or is Martin’s dead, mad sister haunting Jo – uneasy at her suicide or was it murder? Is Frances helping Jo discover the truth and what was it? Meanwhile Jo learns things about Alex, the same Alex Jo thought she knew so well. Did she really, though? Alex with his German relatives and unusual last flying mission plus a Colonel who obviously knew Alex’s name but refuses to acknowledge that to Jo. Since the story is told in first person POV, are the others being truthful with Jo when they contradict what she thought she knew? Whom can she trust?

When the familiar figure arrives, his identity isn’t a surprise – just his motivations and reasons. He might be able to hoodwink or convince most people with his carefully crafted story but not Jo. Jo is coldly furious and not able to forgive or forget her three years of anguish overnight. Explanations to Jo follow which might even be the truth and he and she realize they both believe Cousin Fran’s death needs more investigation as well as finding a possible traitor still on the loose.

One thing that clearly comes through is that then spies and spying were seen as distasteful and, as is still the case now, it’s a dirty business. With Jo helping to kick against the traces, a reconciliation between them is achieved a bit faster but still believably with both of them united against the one pulling the strings. There are still clues to be sorted and discoveries to be made. It’s at this point that villain exposition occurs – which I usually don’t like though I’d begun to suspect this person – and all hell breaks loose. Literally, I think.

I will admit to being surprised at how the Forsyth family issues play out and are resolved. I kept expecting one thing but got another. In the end, I don’t mind that and it’s very satisfying but just not at all what I thought I’d be reading. The reconciliation is also well done with Jo’s emotions and actions making total sense to me even if they surprise another. There is a secondary romance of sorts which also turns out well and I happily fell for that couple and their unforeseen HEA. As for the main romance, with the flashbacks and discussion of one person, I felt I knew him and what drove his decisions. I finished the book sure that they would continue to work things out – together this time. All in all, this was a page turning post WWI gothic that I won’t soon forget. B+

→ Jayne
Previous article: REVIEW: The Rest of Our Lives by Dan Stone
Next Post: DAILY DEALS: Bad girls and near death experiences