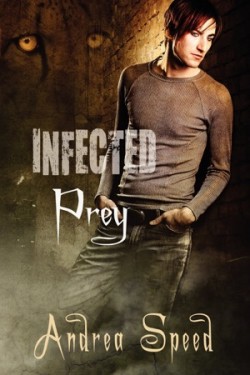 In a world where a werecat virus has changed society, Roan McKichan, a born infected and ex-cop, works as a private detective trying to solve crimes involving other infecteds.

The murder of a former cop draws Roan into an odd case where an unidentifiable species of cat appears to be showing an unusual level of intelligence. He juggles that with trying to find a missing teenage boy, who, unbeknownst to his parents, was “cat” obsessed. And when someone is brutally murdering infecteds, Eli Winters, leader of the Church of the Divine Transformation, hires Roan to find the killer before he closes in on Eli.

Working the crimes will lead Roan through a maze of hate, personal grudges, and mortal danger. With help from his tiger-strain infected partner, Paris Lehane, he does his best to survive in a world that hates and fears their kind… and occasionally worships them.

I have been seeing lots and lots of positive reviews of these series but stubbornly avoiding them, because I am a spoiler-loving reader and because of what happens to Roan and Paris in book two. This kind of development would normally annoy and upset me a great deal. So I figured it is not fair for me to bring my own issues and preconceptions to the books (I understand on an intellectual level that this could be handled very well, I just usually have no interest in reading this plot line in romantic fiction) and avoided them. But recently the last book in the series came out, and while it does not mitigate what happened earlier, I checked out the ending and was pleased with what I learned. So I decided that I am going to read this book and see how I feel. I really enjoyed this story.

These are urban fantasy/ mysteries with a strong romantic storyline. As the blurb states, the werecat virus changed this society – you can get this virus by being infected during sex or blood transmission. At first I thought this was a metaphor for the HIV virus, but at least briefly HIV was mentioned as a separate virus that also exists in this world. Nevertheless, I still feel that the similarities are plentiful. Both Roan and his boyfriend Paris are werecats – Roan was born with the virus, Paris was infected when he was an adult. It is understood that most varieties of the virus will shorten your lifespan, some more than others.

Roan and Paris are deeply in love and while I cannot be sure yet that the book will leave me with an enduring memory (only couple of months passed since I have read it and wrote the review), right now I think that I just read about one of the most powerful love stories in all the m/m books I have ever read. Roan is a gruff detective (and lion shifter) who had a rough childhood and a couple of relationships in the past that did not end well. He does not show his feelings all that often, but when he does, it is very clear how much he loves Paris and what he would give up for him.

Paris claims that he changed a lot after being infected –he used to sleep with people indiscriminately, manipulating them left and right. Even though we can see that Paris really can manipulate people, I could not believe that he changed all that much from his pre-infection days character wise. Paris’ abilities to charm people have helped a lot in their investigations.

“Everyone found Paris attractive; he was a secret weapon in getting people to talk. People who would never talk to Roan would be relaxed around Paris, be charmed, and suddenly they’d start telling him things they wouldn’t tell anybody else. While it was true women were best at ferreting out information like that – it was a psychological thing- apparently a handsome bisexual was a next best thing”.

The mysteries Roan investigates (with Paris helping in spite of Roan’s efforts to protect him) are all connected to cats’ crimes in one way or another. Roan has a complicated relationship with the police, but usually they do not mind his involvement when it is connected to “kitty crimes”. I am not yet sure how much discrimination the infected face in this world, but all the signs suggest “more than enough”.

“Who doesn’t?” Sikorski replied wearily. Look, if you could just look around … the community, see if there’s someone who knows of any cats with especially odd teeth, or maybe a hybrid…”

“The community?” What a nice euphemism, especially since there really wasn’t such a thing as a “kitty community” (except online), although a lot of normal erroneously believed there was. There were just bars and nightclubs where you could go, and they kept things low-key, much like gay culture in the very early days. “I’ll see what I can find out,” Roan said, then hung up.”

I thought both the investigations in this book were stellar – Roan and Paris do a lot of leg work, and carry out very meticulous investigations, and sometimes they need to use their enhanced abilities (increased smell, the chance to threaten a suspect to be eaten by Paris in his tiger form ?, that kind of thing), which only happened once that I can remember. I was especially impressed by how the suspect was slowly revealed in book one – at first only part of the situation was revealed, and then we learned everything. We saw how Roan was solving the puzzle – and it made complete sense to me.

Despite loving the mysteries however, it is Roan and Paris and their love that left the lasting impression on me.

“Paris’ wry look did not go away; in fact, it was starting to get really annoying. “It’s kind of cute, you know. To know that you actually have some kind of insecurity somewhere.”

“What’s that supposed to mean?” He tossed the laptop in the backseat and suddenly regretted asking. “No, forget it, we have to –“

Parris reached over and grabbed his chin, turning Roan’s face toward his. He scooted closer on the seat too – boy, these Mustangs had more seat rooms than you’d think. “You are so funny. You do know I love you more than I’ve ever loved anyone, right? Well, admittedly, I never really loved anyone before, but saying that blunts the impact. I know you’ve got the whole hard-boiled detective thing going on, but I know what you’re really like. I know that under all that armor you’re the most decent man I’ve ever met. You’re my hero”.

There is no sex in this book – the door to their bed room is firmly closed and touches, words, and sometimes kisses are all we see, but I swear to you, this book was one of the sexiest books I have ever read, because when Paris touches Roan’s neck and we hear Roan that Paris was the only one who found this erogenous zone of his… I could imagine lots of things happening right after that.

And then there is that heart breaking last line.