REVIEW: Named of the Dragon by Susanna Kearsley 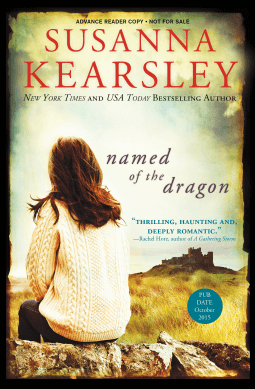 There is past non-consensual sex mentioned.

Although it goes against her workaholic nature, literary agent Lyn Ravenshaw lets herself be whisked off to Wales for the Christmas holidays by her star client, flamboyant children’s author Bridget Cooper. She suspects Bridget has ulterior motives, but the lure of South Wales with its castles and myths is irresistible. Perhaps a change of scene will bring relief from the nightmares that have plagued her since the death of her child.

Lyn immerses herself in the peace and quiet of the charming Welsh village, but she soon meets an eccentric young widow who’s concerned her baby son is in danger—and inexplicably thinks Lyn is the child’s protector.

Lyn’s dreams become more and more disturbing as she forms a surprisingly warm friendship with a reclusive, brooding playwright, and is pulled into an ancient world of Arthurian legend and dangerous prophecies. Before she can escape her nightmares, she must uncover the secret of her dreams, which is somehow inextricably located in a time long ago and far away…

Here is another reissue of one of your earlier books as we wait for our next new book fix. I’m tempted to call it Woo-woo in Wales. It’s got a little heartache, a bit of romance, a sprinkle of paranormal and a gorgeous setting. It’s also filled with writing that I can sink into like a comfortable chair and characters who seem real all the way through to The End.

Tempted with the opportunity to sign a major authorial client, agent Lyn Ravenshew is sucked into spending her Christmas holiday in Wales where she soon finds herself surrounded by the beauty of the place, several interesting people and a bizarre situation with a local woman who thinks Merlin has spoken to her and that dragons are after her child.

Lyn is a Volvo kind of woman while her client and sorta friend Bridget is more like a finicky, foreign sports car. Lyn is the kind of quiet person to get a job done and not be a drama queen while doing it while Bridget revves her engine and roars around making sure every man within a mile sees her at all times. At least the guy who gets her is aware of how high maintenance she will be. But Lyn has her fragile moments too and despite several other characters’ exasperation with a delicate woman’s fears, it’s Lyn who understands the fear for a child.

She’s also confronted with an arrogant playwright who seems determined to think the worst of her and act on that. Good for her that she verbally zings him the first time he pulls his attitude on her and she doesn’t let up after that. The romance here is the classic gruff hero + earnest heroine = modern gothic. I can understand Gareth’s reluctance to allow anyone he sees as being from the shallow world of London publishing back in his life given his experience there following his meteoric initial success. He’s not the kind to feed on the superficial glitter or welcome (who he guesses is) an uncaring person he thinks might be grabbing at his muse for profit. The shift in their viewpoints on each other is a slow one which takes the length of the book to bring to a boil. It’s fun to watch for the subtle clues and changes in feelings.

Lyn’s dreams are certainly vivid and long lasting. Five years of that nightmare about her child would have driven me loco. Then to have a Dream Lady begin to show up – plus be stingy with her clues as to what Lyn should do to save this other child – and afterwards discover that someone else is sharing her dreams? Very eerie. But I have a friend who has vivid dreams in which her child visits her. As she says, “I know what I know.” so I guess anything is possible.

It takes quite a while for all the threads to be woven and clues to be salted through the story. A lot of these just have to be filed away until the moment it all begins to come together. When the mystery is solved, well, it still doesn’t exactly make a great deal of sense and depends on a lot of circumstance to throw doubts and questions about to confuse Lyn. Still, the moments when Lyn is scrambling to save herself and another is full of tension and danger in true Mary Stewart heroine fashion.

The setting is detailed and I’m not surprised that it’s based on an actual place. It’s just too descriptive to be otherwise and so easy to slip into and believe. But after a while, I had to wonder what it was all there for. It’s like taking the scenic route instead of the Interstate. I guess it’s the journey vs just getting to the final destination but it seemed like this took up a lot of space in the place of plot.

This one has a restrained romance which is fun to watch evolve and an immersive setting which snuggles around me. I’m not sure about the whoo-whoo stuff in the story. But it does create a bond which solves a mystery and saves a situation. And the story did mostly take place in Wales where myths and legends are right at home (merely trying to understand the prophecies of Merlin would drive me to strong drink) and the heroes are never dead, only sleeping. B-