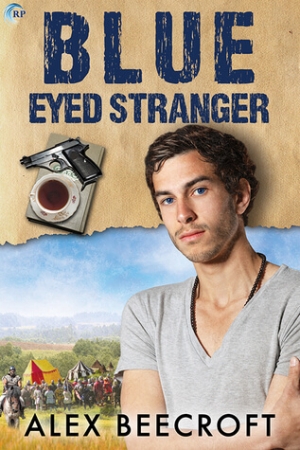 Billy Wright has a problem: he’s only visible when he’s wearing a mask. That’s fine when he’s performing at country fairs with the rest of his morris dancing troupe. But when he takes the paint off, his life is lonely and empty, and he struggles with crippling depression.

Martin Deng stands out from the crowd. After all, there aren’t that many black Vikings on the living history circuit. But as the founder of a fledgling historical re-enactment society, he’s lonely and harried. His boss doesn’t like his weekend activities, his warriors seem to expect him to run everything single-handedly, and it’s stressful enough being one minority without telling the hard men of his group he’s also gay.

In this book you bring your readers back to the town of Trowchester. There is no need to read the first book before this one – Finn from the first book makes a cameo appearance, but otherwise the town is the only thing that seems to connect this series together. As the blurb states, the leads in this book are Billy Wright and Martin Deng. I liked them pretty much from the moment I met them. Martin is a school history teacher and his box does not seem to like the curriculum he teaches to his kids, even if it makes many of them actually interested in history.

“It was Martin’s magic.  Once he’d seen the transformation in his black kids, he’d hunted down little-known facts for the children of other ethnicities and for the girls. Through warrior queens, pioneer aviators, the Night Witches of the Second World War, and the pirate empire of Ching Shigh, he had taught his girls that they too could be glorious. Now they came into his class prepared to be amazed and inspired. They came with their heads up and their little faces bright, reassured of their own noble heritage and potential.”

Martin’s boss also does not like that he takes time off to participate in his Reenactor’s Society – they do Viking battles. It looks like the participants in this society pay a lot of attention to historical accuracy. I will confess, and this is a completely uninformed opinion so I am happy to abandon it, that I thought reenactors don’t really care about historical accuracy much as long as their clothing looks superficially similar to the time period and they can act out the battles. I am happy to hear that this is not true and the lecture from Martin to one of his fellow reenactors was impressive to me.

“I can’t count the number of ways that this is wrong.” He turned it over. “Look at this clasp – invented in the 1980s. Pseudo – Celtic knotwork. Even if the Vikings weren’t an entirely different people to Celts, with an entirely different style of art, the Celts themselves would piss on this as making no sense. Viking jewelers didn’t use any of these stones and in any case, they certainly hadn’t invented faceting yet. You try and wear this, I will ban you from the field”

“Meanwhile, Stigand was still refusing to back down. “You’ve got orange stones in your necklace, so why can’t I—“

“I have got carnelian beads because my character is from the kingdom of Meroe in Nubia, one of whose principal exports was carnelian. Unless you also happen to have a Sudanese parent, that excuse isn’t going to fly for you.”

I was very impressed with how much detail the writer provided in order to establish the setting and give the characters their passions and interests. In my eyes that made them more interesting, more realistic, more fleshed out “people”, not just two bodies spending all the pages of the book in bed.

I have not discussed Billy yet. Billy does not have a regular job; he picks up odd jobs here and there, like being a tour guide for example. This is due to his life circumstances – although I am not sure if his life circumstances were different and whether he was able to hold a regular job at the time we meet him – but because his depression episodes seemed to be quite severe. He is not by all means cured at the end of the story – and I was grateful for that too, “true love cures mental illness” is one of the storylines which always makes me want to give my kindle a flying workout. There is nothing to that effect happening here – Billy learns some better ways to manage his depression but he still has better days and best days and bad days. The hope is that due to medications his bad days will be less severe. I thought the topic of depression was handled very sensibly and knowledgeably, but if triggers you, beware. I learned about depression, but I am not living with it, so beware and avoid the book if need be.

When Billy has good days, his passion is Morris dancing, and he is just as dedicated to the accuracy of dancing as Martin is dedicated to history in his reenactment hobby. They meet when both of their performances are booked at the same time and the first meeting of the dancing side and the reenactment society does not go over well – even the police get involved.

“Those swords were convincing – not flash enough, not decorated enough, not spiky enough to have been made by some modern dreamer. A part of Billy recognized and respected the fact that these guys looked like they meant business. Another part was too busy going, What the fuck? You don’t get to ignore me too. This is our spot! Our time. Get out of it!

He wasn’t the only one who was enraged. Sometimes, when the side danced on a public road, some tosser of a driver who thought he didn’t have time to wait out a single dance would attempt to drive his car straight through the set, expecting dancers and musicians to move aside for him. It never happened that way. The side closed in.”

Eventually the misunderstanding is resolved, and Martin and Billy see each other, but they don’t completely see each other yet, of course. I could totally see how Martin would be impressed by Billy’s dancing and might want to get to know him better, and then when they talked to be attracted to him.

“Oh the way guy moved. Like … appropriately enough like a dancer, all assurance and grace. His half-obscured expression belied it though, caught off-balance as though he didn’t know what to do about being singled out for the conversation by a black guy. Martin’s heart sank a little.

“I don’t think I can carry enough chips for thirty people on my own. Any chance of a hand?”

A duck of the head to try to conceal a quick and secret smile, and Martin thought, Or maybe he’s just shy, and was ridiculously charmed from head to foot.

“Yes of course.” The smile grew, although the blue eyes were now focused somewhere to one side of Martin’s waist, the guy’s head tilted away.”

I liked their first meeting, I liked these guys together and separate, and I did not have a problem with fast attraction. But the jump from the first meeting to commitment from Martin to stuck with Billy just felt too fast for me. Note I am not saying this because Martin decided to be there in the middle of Billy’s depression episode – fast love bothers me in romances more often than not, no matter who the guys are. I was trying to figure out why – it happens in real life, but I think in romance I want to see the development of the relationship and part of the development was missing for me. However, when they start dating they are still dealing with issues – Billy’s illness, Martin being scared of coming out — and I thought this part was handled very well. I liked that they made mistakes but eventually bounced back. I liked their low heat chemistry, and I thought the ending was very sweet.

→ Sirius
Previous article: Thursday News: On being outside the box
Next Post: Friday News: On Women