Yes I was told this was Twilight fan fiction when it was pitched to me by the publicist. I don’t see even a hint of Edward and Bella anywhere in this book, but I appreciate the straightforward acknowledgment of the provenance of the book.  And I love the cover. 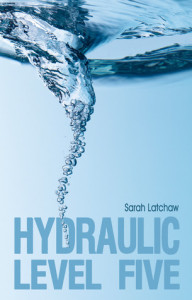 The title “Hydraulic Level Five” refers to a whitewater rapids.  A Class 5 is rather hazardous whitewater rapids requiring precise skill and a daredevil heart. It’s an extreme sport and since Kaye’s biggest adventure left her, she’s had to resort to skydiving and rafting dangerous rapids. Aspen Kaye Trilby  loved Samuel Caulfield Cabral since before she knew what love was. She wanted to be part of him and part of his family and when they were married just out of high school, she was deliriously happy.

But Samuel was not. Unbeknowst to her, Samuel was so unhappy with their life in Colorado he tells her that he is moving to New York City and that she’s not to come. She doesn’t listen to him and travels there by herself only to see something that sends her running back home whereupon she files for divorce.

In the intervening years, Samuel writes a bestselling novel which, from the excerpts, sounds a little like a Sarah Addison Allen novel – one part small town charm, one part magical realism. It becomes a bestseller as do all of his novels and Samuel himself becomes a celebrity after his bestselling novel becomes a major successful motion picture.  But celebrity attention uncovers that one of the major characters in Samuel’s books is based on his estranged wife Kaye. He took the “write what you know” a little too seriously.

When Samuel returns to his hometown for his sister’s wedding, Kaye decides its time to find out the truth.  Why did their marriage break up? And does Samuel really no longer love her?  Because Kaye has never, and will never, get over Samuel.  They were friends for so long. She’s part of the Cabral family – a big Mexican American family – and she’s always felt like Samuel was part of her story.  The Cabral family was a character all its own, from the parents who took both Samuel and Kaye into their bosoms to the vibrant daughter who encouraged Kaye to prank Samuel in hopes that these tricks would eventually bring Samuel and Kaye together again.

When Samuel turns up with his perfect editor in tow who clearly wants a romance with him and Kaye finds out that Samuel has killed off the character based on her, her subconscious conviction that somehow she’d always be part of his life is shaken.  What separated Samuel and Kaye wasn’t a silly disagreement but a fairly meaningful issue.  I wasn’t entirely convinced about the security of their future together which is why the ending fit for me.  The story is told primarily from Kaye’s point of view but Samuel’s feelings, both present and past, are revealed through snippets from Samuel’s last publication and a current work in progress.

What happened in New York, why their marriage failed, and Samuel’s true feelings are all part of what drives the story and provides the suspense of what happens. The outcome isn’t always clear even if the reader wants it to end a certain way.

There were things that weren’t quite perfect for me. Samuel’s writing seemed tortured at times and the snippets from his bestselling novel were confusing to read (something about water creatures eating up spirits??). While Kaye is billed as this lover of adventure, she comes off quite timid.  The secondary characters were so strong that they seemed to overtake the scenes at times. But the grief that Kaye has over the loss of her marriage and the loss of her childhood ideals resonated.  Despite their mid twenties ages, Samuel and Kaye came off older to me and the hence the story seemed grown up.  I look forward to reading the second book about their love.  B-

→ Jane
Previous article: Friday News: Sign up at a data collecting company to find out what data they are collecting about you and other news
Next Post: REVEW: Naked in Death by J.D. Robb