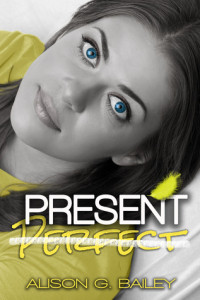 I completely understood what you were trying to sell in this book because you tell us what your narrator’s problem is in the blurb and in the opening passages of the story. Amanda ‘Tweet’ Kelly has felt like she has come in second in her life to her utterly perfect sister.

The only bad thing Emily had done was cast a perfect shadow that I had to live under, making my accomplishments pale in comparison, thus making my life miserable. My life didn’t appear miserable from the outside, but inside was a different story.

I have always felt inadequate in all areas of my life.

This insecurity is the underlying motivating factor in Amanda’s interactions with only one person – her best friend Noah. It is this dichotomy that makes Amanda’s actions baffling and irritating through much of the story. The one person whom Amanda admits has never once treated her as second class; the one person who believes she is better than her sister; the one person who loves her unconditionally is the only person Amanda treats like utter crap throughout 75% of the book.

Noah and Amanda are best friends from birth. They were born just hours apart and they were virtually raised together. Their friendship feelings turn romantic when they reach their early teens and there begins the drama. Noah admits his feelings for Amanda and for his own good, Amanda repeatedly rejects him.

She becomes jealous when she sees him with someone else and when he apologizes and offers the great explanation that he’s just using these other sluts because she won’t have him, Amanda turns to another guy in their school.  It was when Amanda hooked up with this other boy that her feelings of insecurity really shined through because only someone who was filled with self loathing would have picked this guy over Noah. Amanda almost enjoys hurting herself and the ones she loves the most repeatedly.

So Noah and Amanda begin a pattern of using people to make each other hurt. When Noah starts to date someone more seriously, Amanda interferes because of her jealousy. Noah admits that he loves her, that he’ll break up with this other girl, but Amanda continues to push him away. The writing of these scenes are very effective. Noah’s pain is palpable. Amanda’s confused feelings of jealousy and hurt are also authentic. But in each one of these emotional scenes, I struggled against my dislike for Amanda. Perhaps if I saw more of her actions being triggered by continual evidence of her parents running her down or her teachers comparing her to her older sister, it would be different.

But mostly we see a cycle of painful actions. Noah is practically a saint toward Amanda. No matter how many times she rejects him in spite of him opening his veins in front of her, he still returns to her. Many of times, I cringed at the way he treated other women. In order to make Noah the hero, however, the women that he hooks up with always have to be “bad” in some way such as mean to Amanda when Noah wasn’t looking. But really, if you were Noah’s girlfriend, you’d develop a fine slow burn toward Amanda because she was a huge threat to the relationship and her passive aggressiveness toward Noah was continually undermining his ability to have a healthy relationship.

The story is primarily rooted in their high school years and then slightly into their early adulthood.  Amanda’s self destructive behavior was hard to read and frankly I don’t think she ever learned from it. Instead, a huge plot twist is thrown into the story at about 70% and the entire course of the book changes. This plot twist felt incredibly manipulative.

Despite Amanda’s frustrating behavior, the narrative voice was still very engaging. The emotional parts of the story resonated and while I felt manipulated throughout much of the story, I was still moved, almost against my will. I don’t want to read another story like Amanda’s but I’d definitely read another Alison G. Bailey written book. C