It is a time of celebration in the Pingkang li, where imperial scholars and bureaucrats mingle with beautiful courtesans. At the center is the Lotus Palace, home of the most exquisite courtesans in China…

Maidservant Yue-ying is not one of those beauties. Street-smart and practical, she’s content to live in the shadow of her infamous mistress—until she meets the aristocratic playboy Bai Huang.

Bai Huang lives in a privileged world Yue-ying can barely imagine, let alone share, but as they are thrown together in an attempt to solve a deadly mystery, they both start to dream of a different life. Yet Bai Huang’s position means that all she could ever be to him is his concubine— will she sacrifice her pride to follow her heart? 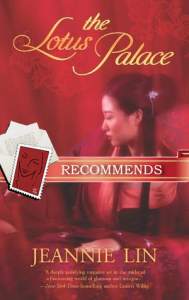 Jayne:I don’t think we’ve ever dual reviewed a Lin novel and I was eager to see what you thought of her latest one. “The Lotus Palace” is almost two books in one. It’s a love story between two people of vastly differing social backgrounds as well as a murder mystery. The romance worked fairly well for me but the mystery didn’t grab my attention as much as I might have wished.

Sunita: I really enjoyed your review of her previous book, The Sword Dancer, so it’s great to do this one together! I agree that the mystery wasn’t particularly unusual, and by the end I didn’t really care whodunit, but the setting and the romance were so appealing to me, especially as events unfolded in the second half, that I was really caught up in the different aspects of the book.

Jayne: One thing I can always count on when reading her work is that I will almost effortlessly learn a lot. Details, large and small, are seamlessly woven into the narrative and I never feel as if I’m being force fed every little thing she learned during her research. Recently I read something on the BBC website about the difficulty of the exams Chinese scholars who sought government positions had to face. In the struggles of Bai Huang, I can see this come to life. 20+ years later, I still remember the grueling study schedules my accounting major sorority sisters set for themselves in order to pass the CPA exam but I don’t think they had anything on what Bai Huang endures – for the fourth time. It’s too bad that women couldn’t have taken it as his sister Wei-Wei looks like she would have aced the test the first go round.

Sunita: Wei-Wei is a terrific character; she starts out as the stereotypical cute younger sister but you realize quickly what Bai Huang knows, that she is very smart and very focused. She accepts that she can’t be a scholar the way a man can, but she still manages to use her talents.

The setting is so richly realized, even more so than in The Sword Dancer, whose worldbuilding I thought was excellent. I agree that there is no sense of infodumping, just the careful evocation of a community and its geographical and political context. Because of that, the first half of the book was a bit slow-moving for me. We learn about the Pinkang li, the quarter where the courtesans live, and we get to know the inhabitants and customers of the Lotus Palace. What I like about this approach is that by the time the romance really gets going, we know Yue-ying and Bai Huang as individuals, so we’re rooting for a happy ending because they really fit together, not because they are each the other’s designated Beloved Object.

Jayne:The Historical Undone novella “Capturing the Silken Thief” introduced me to the world of Tang Dynasty courtesans and the people who worked with them. “The Lotus Palace” takes this many steps further and is a full-on immersion into this environment. Yue-ying lives in the background of this pleasure palace. She and her mistress Mingyu were sold into this life and share a bond no outsider understands. Yue-ying knows how lucky she is to have been redeemed from being a common prostitute in a brothel even if her marked face disqualifies her from the heights that Mingyu has reached.

I enjoyed reading about Yue-ying. She’s practical, hardworking and doesn’t stand for any nonsense from Bai Huang. She serves as his introduction to the world of these servant girls and teaches him some respect for those who aren’t rich and privileged. This is actually my favorite aspect of the book. An experience in Bai Huang’s past has already stripped away the veneer of the beautiful illusion the courtesans project but meeting Yue-ying makes him truly see the harsh reality behind the glitter.

Sunita: Yue-ying is a terrific character. She’s been dealt a very tough hand, but she’s neither downtrodden nor feisty. She accepts the world as it has been made for her and she appreciates the good things in her life. Her relationship with Mingyu (who is another nuanced, interesting character) is clearly more than just courtesan-servant, but we don’t find out precisely what it is until the second half of the book. Yue-ying is understandably unromantic, but she’s also loving and interested in the world around her.

Jayne: One thing I loved was Yue-ying’s visits to the local temple including stopping to see an ancient (I assume) sea turtle who lives there.

Sunita: I did too, and it’s typical of Lin’s approach that was seems like a trivial interlude featuring the turtle turns out to be important, both in showing us a side of Yue-ying and to the plot. As for our hero, Bai Huang is clearly more than he at first appears, but I wasn’t sure exactly how he would turn out. In the second half of the book I realized that he fit a common historical romance archetype: the under-achieving aristocratic eldest son who has failed to live up to expectations but wants to do better. But he wasn’t predictable in this story because his background and context meant that his family interactions, his parents’ expectations, and his own choices were identifiably Chinese, not British or even generically Western. It’s a great example of how a little-used cultural context provides a palette of character motivations and actions that is the same in some ways and very different in others.

Jayne: Still, he’s a bit of the romantic in their growing relationship. She has to bring him back down to earth. It felt realistic that to her, sex would be devoid of emotion while he would get wrapped up the hearts and rainbows. And while her feelings changed more quickly than might be reasonable, I appreciate that Lin didn’t have one good sexual experience “cure” her. It took two. Oh, well.

Sunita: Those are really great points. The “bad sex” scene has the shape of other bad sex scenes in romance novels, but the particulars are all about these two characters. I admit I was also surprised at the relatively rapid transition, but by genre standards I suppose it’s not that fast.

Jayne: The roadblocks on the way to their HEA are formidable. He is of a renowned family of wealth and means. She is the daughter of a poor farmer who sold her. His family has already arranged a marriage for him and she resists becoming his concubine because she’s already been owned in the past and, now that she’s free, she’ll never submit to that again. As it got closer to the end of the book, I was biting my nails as I wondered how Lin would get them past this impossible impasse. A clever woman – yah! – saves the day. I hope she will get her own wonderful hero at some point.

Sunita: I honestly did not know how Lin was going to get this couple to an HEA. She laid the groundwork for why Yue-ying didn’t want to be a concubine so well that I launch into my usual “Oh, just go ahead, you’ll be set for life” lecture. Yes, there was a way to be a content woman as a concubine, but Yue-ying wasn’t going to be able to manage it, and neither would Bai Huang be able to play his part. And given that both she and Bai Huang knew that he wouldn’t be happy if he didn’t fulfill his family obligations, I didn’t see a way out. But there was, it was completely believable and, in retrospect, it was obvious.

Jayne: Yes, very obvious but very realistic and nothing that made me roll my eyes and think,”Oh, just go with it, Jayne!” As much as I enjoyed the romance though, the mystery didn’t work so well for me. It just didn’t make sense to me that Mingyu and Huilan, who had both been in this world of owned women for years, would have banded together over this one incident out of what surely must have been a similar background shared by many of these courtesans and prostitutes. The nitty gritty of solving the case didn’t differ from many mysteries I’ve already read and wasn’t as interesting to me as learning more about the Tang Dynasty.

Sunita: I don’t disagree with you at all on this, but I nevertheless went along with it. I didn’t have much of a sense of Huilan, but I felt that Mingyu had more intense emotions than she expressed, so her sudden decision seemed somewhat plausible. And while the procedural aspect was pretty standard, I liked the character of Constable Wu a great deal, especially his interactions with Yue-ying.

Jayne: The romance between a down-to-earth heroine and a more starry eyed hero “made” this book for me. The “how would she manage to get them together and solve the realistic conflict she’s set up” dilemma kept me glued to the story. The murder mystery – eh, not so much. I hope Wei-Wei will show up again in a future book and that we’ll see more of Yue-ying managing to keep Huang anchored and steady. B-

Sunita: I think that there are definitely readers who have similar reactions to yours, and I think you make a good argument for them. Nevertheless, when the romance started to really take off, and Yue-ying and Bai Huang had to balance their happiness at being together with the uncertainty of how they could have a future, I fell completely in love with this book. I think it’s in part because I deeply appreciated the way the context and the language reflected a more formal, hierarchical society while still showing the way romantic and familial love shaped people’s motivations and actions. It felt utterly authentic to me, and I don’t have that reaction very often. The way Lin took traditional romance archetypes and storylines and embedded them in an unfamiliar (for romance) context impressed me a lot. That’s probably why I find this to be her best book yet, and I expect that she will get even better. A-