REVIEW: God and the Wedding Dress by Marjorie Bowen 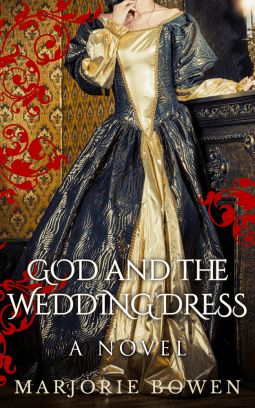 In a remote Derbyshire village, over three hundred years ago, a man tried to serve his God to the best of his belief at a terrible cost to himself and others.

He believed he was following Divine instructions. But was he a hero or a fool?

William Mompesson is the new Rector of Eyam. He is young, handsome, and has a lovely family. Life is too easy in the countryside, as his wife and children enjoy his generous income and the apathetic locals do not require much spiritual guidance. Mompesson’s greatest daily challenge is for the souls of his parishioners, as paganism and the famous dissenter Thomas Stanley vie for the attention of the people.

But he soon faces a great test as the Plague comes to town, possibly in the crate with his sister-in-law’s wedding dress. As his parishioners die one after another, how can Mompesson reconcile God and the wedding dress?

Set during the tumultuous reign of King Charles II, ‘God and the Wedding Dress’ is a gripping piece of historical fiction from a prolific author in the genre.

First of all, let me emphasize that this is Historical Fiction based on a real incident in which the Derbyshire village of Eyam closed itself off after plague struck it in 1665/66. There is no romance ending here and few HEAs for the people involved. And yes, this is what Geraldine Brooks based her novel “Year of Wonders” on. When I saw that this book was originally written in 1938, I decided to see what another generation before ours had to say about it.

The first chapter sets up several issues affecting the characters – religious dissenters (here basically Puritans) v CoE. The recent Civil War and how it affected everyone from the (then) Earl of Devon who lived in penurious exile, to Mompesson and his wife whose families both lost their estates and income, to Thomas Stanley who was Puritan pastor of the area under Cromwell but who now has lost his position and must eek out an existence on the charity of others. There are social issues too with Mompesson longing for his former life living with his patron in relative luxury while now he’s among people he honestly thinks are little better than barbarians. It speaks to the isolation of the age that the villagers of Eyam viewed anyone from outside – well basically all of Derbyshire as a “foreigner.”

Frankly this section (the first chapter is looong) is a whole lot of the same. It’s more a set up of how little respect Mompesson has among his villagers, how they’re all looking forward to the wild licentiousness of some upcoming yearly throw-down festival, the bad feeling Mompesson has about his future brother-in-law and how he’s wrestling with his call to God v his love of the finer things in life. Rinse and repeat though done in lovely, meandering prose and effortlessly showing a lot of details of life in a 1665 small Peaks village.

Meanwhile, I’m wondering when the plague is going to hit town. It’s sure taking its time. But even when this happens – and thanks to the Earl’s warning to Mompesson about not ordering in anything from London as the plague was known to be there, Mompesson was ready for it – there’s really not as much panic as I would expect and no Grand Gesture of isolating themselves for the good of others.

No, instead after an initial period of illness and dying, a severe winter arrives which seems to kill off (sorry, no pun intended) the disease. Or so they think. Some people who had fled the first outbreak are emboldened to return and life seems ready to proceed as normal. Until one of them dies and the cycle starts again.

William Mompesson had done some reading on the subject of the latest medical knowledge of the plague and could compound some simple nostrums and remedies. With this information and skills as well as his religious calling, he sought to treat and tender care to his parishioners. But since many of them still preferred their Puritan preacher Stanley, William finally reaches out to the man and together they devise a plan based partly on their medical knowledge but mostly on their faith. Shut off the village to prevent the spread and call on their faith in God to test them and hopefully save them.

What follows is terrible. Well, it’s terrible to read and I can’t imagine living through it. Probably the recent horror of Ebola would illustrate what these people went through only they did it with the limited medical information of that age to hamper more then help them. The village runs out of coffins, runs out of space in the church graveyard, runs out of people to bury the isolated outlying farm families, runs out of fabric to use for winding sheets. A miasma of death hangs over everything as cottages fall to ruin, weeds choke streets and William and Stanley grimly guestimate by what time all will be dead.

In the midst of the dying and death, some find faith and some lose it. Some fall victim to the disease almost immediately while others daily deal with the bodies and never become infected. Outside sources inform the Eyamites that their sacrifice was for naught with other towns in the area having plague victims and the quarantine having done nothing but condemn them all to death while others laud the villagers for what they did.

When it is 30 days past the last death, the Earl and his men venture into Eyam to see who remains. What they find shocks them, yet amazes them. The terrible toll on the living is almost as bad as the deaths yet those who have come through are like purified steel.

This is obviously not light reading. It is as the blurb says, a test of faith for some. A trial of strength for others. I finished it slightly depressed and yet also filled with awe at what humans are able to withstand and endure. B-