REVIEW: One Night by A.J. Pine

I’m going to start off by stating that I found One Night to be a very frustrating book, due to the structure and some of the narrative choices. I found it so frustrating that I almost quit reading a couple of times (rare for me), but my desire to know how the story would resolve kept me reading. 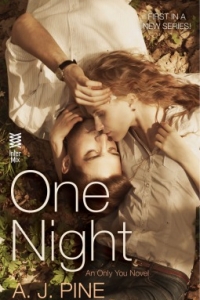 The book is told in the first person by Jess, a college senior working towards a Physical Therapy degree. When the story opens, Jess is kicking the latest in string of one-night stands out of her bed and apartment. This is Jess’ pattern: she goes to a bar, gets drunk, picks up a guy, brings him home and has sex, then sends him on his way with a to-go cup of coffee.

The day after her latest tryst, Jess is at the hospital doing her PT internship rotation when she meets Adam Carson, a basketball star at her school who is trying to recover from a severe knee injury. Adam seems open, friendly, and interested in Jess. She, in turn, is so drawn to him that she cuts out the one-night stands. They begin a friendship, but stall on something more due to Jess’ issues.

You see, Jess is tortured. She’s very, very tortured. Something happened the year before and Jess’ life was shattered – she lost her boyfriend and her best friend (who are now dating each other). Jess quit her sorority and took up a life of meaningless hookups and solitude.

So, what happened that wrought this big change in Jess’ life? That’s the problem – the reader doesn’t know. Even though we’re given Jess’ first person perspective throughout the book, all I knew for the longest time was that something happened, and that as a result Jess feels that she is unfit for a relationship and doomed to a life of endless misery.

The clues to Jess’ trauma are doled out with painful slowness. There are brief references to an ambulance ride, and to a recuperation period during which she was out of school. There’s the old bottle of anti-depressants that she now keeps aspirin in (so, she took anti-depressants at one time, but she doesn’t now, which tells me…very little, as a reader). There is precious little else until about two-thirds of the way through the book.

The problem with this structure, for me, was that while I felt compelled to keep reading, I resented it. I did want to know what had happened to Jess. But the doling out of tiny clues felt like an artificial and almost unfair way to keep me hooked.

It didn’t help that at times there are signs that the whole story will come out imminently, only to have Jess pull back at the last moment. At one point she promises to tell Zoe, her roommate and eventual friend, what happened to change her life so drastically. She’ll tell her in a couple of days (for some reason she can’t just tell her then and there – I think it was because Zoe had a houseguest at the time). But when the time comes, Jess decides that, no, she can’t share her secret, and Zoe will just have to deal with being kept in the dark.

A similar pattern of push-pull comprises the bulk of Jess’ fraught relationship with Adam. First, they’re just friends. It’s almost hard to tell if Adam is interested in more – he’s very beta and laid-back. Then, it’s clear that Adam does like Jess (and we know from Jess’ thoughts that she likes Adam), but of course then her Issues get in the way. Then they almost have sex (another frustrating moment, because one second she’s all, “Yes, I’m sure” and the next she pushes him away) but the incident doesn’t really move their relationship forward. They continue to go on Jess’ merry-go-round of secrecy, guilt and self-flagellation for the bulk of the book.

So then, as expected, when the Big Secret is revealed, it’s underwhelming – it was bound to be after that buildup. I understood why Jess was emotionally scarred and fearful of attempting a relationship. I think there are plenty of people her age who would have dealt with the situation better and not act like the world had ended, but really it was the *level* of her angst that felt way overdone. For one thing, it made me think (unkindly) that I didn’t need to feel sorry for her because she already had that more than covered.

Ultimately, it led me to feel like the story was, inadvertently, more about a mentally ill young woman who completely loses her shit when faced with adversity and acts in utterly irrational ways, rather than about an otherwise healthy young woman brought down by tragedy. I’ll spoiler-tag this because it involves something late in the book, but I’m not revealing Jess’ secret:

When, after they do finally sleep together, Jess tells Adam the truth, he reacts in a supportive manner and tells her he wants to work through it. He says repeatedly that he’s not walking away from her. Still, she insists that she sees “pity” and “judgment” in his eyes and she orders him to leave her apartment. She then collapses into a catatonic state from which Zoe (called by Adam) and eventually her parents have to rescue her. This is not normal behavior. Catatonia seems like a very severe response, no matter what sort of tragedy a person has suffered. Jess is clearly irrational and, not to put too fine a point on it, a little nutty. I never felt that this was a result of her loss; it seemed endemic to her personality (her earlier decision to stop taking her medication obviously didn’t help her mental state and reinforced for me that she’s a person with some sort of mental illness that is separate from the loss she’s suffered).

But beyond that, I really felt like I was missing something with Adam. Here’s a nice, good-looking, successful college athlete. Not to be too crude or obvious, but he could probably have his pick of girls (and I guess I should be grateful that he wasn’t another man ho like so many NA college athletes are).

Still, Adam is endlessly kind and patient with Jess. He had some minor trauma in his past involving a cheating girlfriend, and unfortunately, the combination of that history, his tolerance of Jess’ jerking him around, and his overall white knight behavior made me feel like he was a bit of a doormat, really – like he had some need to be the savior to a woman who was incapable of appreciating his efforts.

In fact, just about everyone around Jess is ready to drop what they’re doing at any given moment and comfort/help/pep-talk her, and I wasn’t clear why. Jess says herself repeatedly that she knows she’s selfish and hasn’t bothered to, say, learn much about Zoe or her life. But that doesn’t matter, because somewhere in the course of the book, Zoe decides that she loves Jess (platonically, to be clear), and will do seemingly almost anything to make Jess happy and help her deal with her obvious issues. When or why this happened wasn’t clear to me; they bonded over watching The Vampire Diaries, and suddenly they were besties. There are several other characters who seem to see a lot more in Jess than I did as a reader.

If I sound exasperated with Jess, it’s because by the end of the book I really, really was. Even when she’s supposedly had a breakthrough (which occurred rather randomly after another pep talk that didn’t seem all that different from the million pep talks she’d gotten before from various people) and is back at school, seeing a therapist and taking medication again, Jess is still doing the same old push-pull thing with Adam. At that point I gave up on her. I finished the book, but I didn’t much believe in the HEA, because I had little hope or evidence that Jess had changed at all. My grade for One Night was a D.