REVIEW: Getting Hotter by Elle Kennedy

I’ve really enjoyed this series you have written for Samhain and my biggest regret were that they were novellas and not full length stories. Getting Hotter is the first full length novel and while I enjoyed it, so much of the text was given to building up the secondary romance that I wondered if I was just getting to novellas in one story. 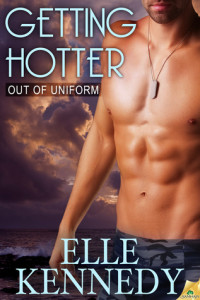 Seth Masterson is part of the infamous SEAL team based out of San Diego. He’s had the good fortune (according to his teammates) of being raised with a number of Las Vegas showgirls. His mother was one and she still works in the show. One of the younger dancers is Miranda Breslin and ever since Seth saw her dancing on the stage, he’s wanted her in his bed. A heavy rain fall resulting in flooding of Miranda’s apartment places Miranda conveniently under his roof.

But Miranda is the mother of twins and she doesn’t do one night stands. She doesn’t really have the time for it. When she does have time to look, it will be for a guy who wants to marry and settle down. When Miranda moves to San Diego to open up her own dance studio, Seth begins to pursue Miranda with determination. I struggled with why Seth kept after Miranda when she was a parent and he did not like children. It was explained that Seth was having a hard time even enjoying sex with other women and he needed to get Miranda out of his system.

Miranda was realistically drawn as a busy single mom with a new business. It made sense that, despite all her self warnings, she gave in to Seth’s dogged attentions. She deserved to do something nice for herself and Seth was better than a massage and a facial.

The flirtation between Miranda and Seth; the dialogue between Seth and his roommate Dylan; and the banter between Seth and his teammates are a delight to read. It’s funny yet natural. I think the Elle Kennedy books should have a tagline that says something like “She gives good dialogue.”

I liked the idea of a romance between a guy who simply refused to have children and a woman who already had two kids because the conflict is both understandable and seemingly insurmountable. Seth’s aversion to them is well drawn and Miranda’s children respond in kind. They can tell he doesn’t like them or at least feels uncomfortable about them. The fact that they know he doesn’t like them makes it all the more awkward.

Seth swiftly held up his hand to silence them, not in the mood for round two. “Listen, kid.” He shot Sophie a look that usually made grown men cower, and yet didn’t get so much as a blink from the six-year-old. “I don’t care whether you like me or not.”

“That’s ’cause you don’t care ’bout anything,” she shot back. “Because you’re mean. And I don’t like it here!”

“Soph!” Jason’s face was so red he looked like a little dark-haired tomato.

“It’s fine,” Seth told the boy. “Look, it doesn’t matter anyway, because you guys won’t be here for much longer. You’re going back to your place tomorrow or the day after, remember? And FYI, I’m not mean.”

Sophie smirked. “Are too.”

Holy sweet baby Jesus, was he actually playing the Are-Not Game with a six-year-old?

The secondary romance takes place between one of the SEAL members who believes he is straight but finds himself attracted to another man. He admits that he’s fooled around with men before, but only in the context of a ménage with a woman. This idea that he might be gay takes a little while for him to get used to.

Obviously for the Seth and Mirnda to have an HEA Seth would have to come to love children. Or at least Miranda’s children. This happened too quickly, as if he was able to turn an internal switch and all of a sudden became comfortable playing with Miranda’s girls based on some emotional breakthrough. B-