“Miss Buncle Married” takes up nine months after the close of “Miss Buncle’s Book” with Barbara Buncle now happily married to her publisher Arthur Abbott. They live fairly blissfully in Arthur’s house near London with the only blot on their happiness being the tiresome round of social obligations both finally admit to each other they find boring. Barbara also dislikes the odd married couple who have done for Arthur all these years but who despise her. Arthur’s solution – that they move to a nice place in the country with a garden and lawns and trees – is genius. Barbara starts the hunt for their perfect place which ends when she discovers a (frankly) derelict wreck of a house in Wandlebury. Barbara sees in it the house of her dreams while her husband sees only a disaster. But they get it cheap and if it makes Barbara happy, Arthur is satisfied.

After intense months of chivvying workmen and charwomen, the house is finally ready and the Abbotts move house to their little slice of English village heaven. Quiet Barbara is flowering out of her shell (I know that makes no sense) as a married woman but she hasn’t abandoned her habit of watching the people around her and succinctly limning their personalities and quirks in her mind. Just as in her former residence, she finds an abundance of interesting – and sometimes annoying – people upon whom to practice her skills. 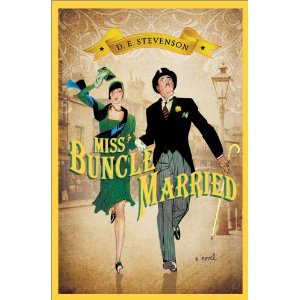 Things get personal when Arthur’s nephew Sam begins to spend some weekends with them and meets a local woman named Jerry about whose family Barbara knows more than she wants. Seeing a match in the making, Barbara is forced to exert all her ingenuity to slow it down for reasons she has promised not to reveal. The itching to write has also overcome her much to her loyal maid Dorcas’s distress as Miss Barbara – sorry, Mrs. Abbott – tends to get obsessed at these times. Arthur loves the book but Barbara fears that if it’s published, she and Arthur will have to do another runner when the people of Wandlebury suss themselves out in the characters of her novel. Sam and Jerry’s relationship also worries Barbara enough to meddle in it frightfully. Will everything come right in the end or will the situation blow up in Barbara’s face?

Much of what I enjoyed in the first novel is here again. The little details of life in the 1930s and the – at least as it’s portrayed – more innocent viewpoint of the world flow through the story. Barbara’s search for a house yields a delightful short monologue on the idiosyncrasies of English villages, of village solicitors, of The Archway House that the Abbotts buy and of Barbara’s efforts to bring it back to life. How delightful that Arthur gives her a free hand about everything. I also enjoyed watching the two of them together. They have a solid, comfortable love for each other that glows like a cozy fire on a cool evening. They respect each other as well and though their relationship might baffle young Sam – imagine crusty old (he’s 43) Uncle Arthur getting married at his age?? – I get a feel for the deep affection between them despite not only a closed bedroom door but one that’s practically not mentioned.

This is still a world with governesses for middle class families though there are inklings about how hard and lonely the lives of those governesses could be. The winds of change are blowing through Wandlebury as evidenced by the fact that Jerry supports herself with her business but also in the servant problems Jerry has – a 2 mile walk to the nearest cinema and having to light oil lamps in a house with no electricity have lost her 4 maids thus far. The Abbotts also have some bizarre, free thinking neighbors – he’s an artist, you know, and she’s just an odd duck all around. And the local Lady at the Stately House has some strange ideas regarding matrimony. Barbara captures most of it in her manuscript which it pains Arthur to vehemently talk (they try not to argue) with her about how to change some of it so she isn’t outted again. This time around, there’s more insight into what drives Barbara as an author and I can’t help but think this was Stevenson’s own viewpoint and experiences peeking through.

Once again, Barbara captures the people around her on the pages of her manuscript and her shrewd insight into their lives is – pretty much – on track. And where it isn’t, well it’s probably for the best. Yet there are scenes here that I hate to say I found boring and wondered at the time spent on them. The children of their neighbors get lots of page space but frankly I found them the little savages that Arthur does. In the first book, the oddities of her fellow villagers are described to show how Barbara saw them and used them in her novel. Here there are things described, such as one child’s sort of OCD personality and strange dreams that Barbara didn’t see or knew nothing about and thus that wouldn’t have even made it into her novel. And the frankly strange things these children do and their interpersonal relationships also don’t appear in Barbara’s third book effort. So…why did Stevenson include them in the book? To shine a light on modern child raising of the time?

There’s also one character I didn’t like from the beginning. Each appearance of his made me dislike him more and no amount of familial loyalty or dismissing of his actions excused the fact that he was a little ass. Yet in the end, he gets rewarded and his previous actions white washed. The loyalty of most of Britain for the Royal Family leads to a tedious chapter as well.

It was nice to watch Barbara continue to grow and mature. The fact that she finally has some people in her life who acknowledge it and appreciate it is icing on the cake. But there are incidences and sections of the book which dragged or felt superfluous. The window into a long passed world is fun to look through even if I didn’t enjoy the view of every room in the house. B-

→ Jayne
Previous article: REVIEW: Getting Hotter by Elle Kennedy
Next Post: Wednesday News: OMG’s first use may be traced back to 1917; HarperCollins & S&S are in talks to merge; New Romance author justifies writing romances