REVIEW: Fangs for the Memories by Molly Harper 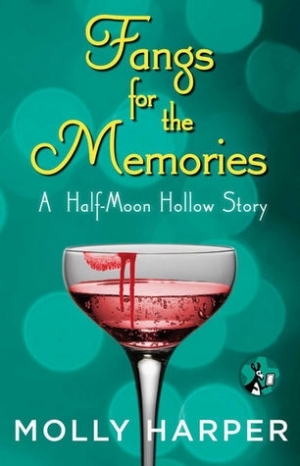 I’m a fan of your (among other things) Jane Jameson series and the spin-off Half-Moon Hollow series. One of my favourite characters who appears in all of these books is Dick Cheney – the vampire, not the former vice-president. Dick is a loveable rogue who wears inappropriate t-shirts. He uses his smooth Southern charm and his good looks with skill.  He’s cleaned up his act a little from the smuggling and other shady dealings he did before he found true love but, only a little. If you want something, Dick is the guy to get it.

Fangs for the Memories is set during Nice Girls Don’t Date Dead Men (Jane Jameson #2) and it does not stand alone well. This novella is very much for fans of the series who have been asking you to write something which shows how Andrea Byrne and Dick get together.

Andrea became a good friend of Jane’s when Jane’s sire (and romantic partner) Gabriel called on Andrea’s services as a blood surrogate (in the first book, after Jane had been mistaken for a deer by a hunter and shot, and Gabriel turned her to save her life* (*except she’s not actually alive but you get my drift)). Vampires need to learn how to drink from a live human safely and some just prefer it fresh rather than from a bottle. Andrea has made a good living being a mobile blood donor for the undead. Andrea lives outside of human society in many ways because of her association with vampires but also is somewhat outside vampire society because she’s not actually a vampire* (spoiler alert: *yet).  This makes her a perfect BFF for Jane who is quirky and somewhat out of step with mainstream society in a number of ways.

Because the books are told from the first person perspective (past tense), readers got mostly the obvious highlights from Dick’s and Andrea’s own story which went on in the background of the series. This novella fills in some of the blanks, including how Andrea came to be a blood surrogate, a little about her family and why she resisted Dick’s advances for so long. And, why she finally gave in to his courtship and said yes to a first date.

Dick hides genuine kindness and caring behind a facades of single-entendres (really, he’s so obvious there’s no double going on) and bad t-shirt slogans and sketchy behaviour (black market iPod anyone?) and here, Andrea gets to witness it in a big way as he opens up to her about how he felt about Mr. Wainwright (former owner of Specialty Books and Dick’s great-great-great-great-grandson. It’s complicated) and again when Dick comes riding to her rescue after things go pear-shaped.

I love Dick and Andrea (but, I admit, mainly Dick – he’s awesome). For all his shadiness, he adores Andrea and will not ever stray. Andrea did negotiate a reduction in Dick’s inappropriate t-shirt collection and she’s the only person who could ever have done that so she’s pretty amazing too.

The story is short and really for fans of the series as there is not enough back story given to really understand what’s going on. One would have to at least have read the first two Jane Jameson books (both of which I recommend and the audios are great too – Amanda Ronconi narrates and she’s the perfect narrator-pairing for your books) to really understand what is happening and who the characters are. But, for what it is, it is fun and sweet and it gives those of us who adore Dick Cheney about 60 more pages of him which is a definite win.

“I’m just not comfortable with you going out on these appointments for money,” he told me.

“Could you please rephrase that so I don’t sound like the title character in that Roxanne song?”

Dick muttered, “I worry about you.”

“I appreciate that, but I’m a grown woman. I don’t need you to keep tabs on me.”

“I don’t think of it as keeping tabs. It’s more like observing closely in a manner that you might not always be aware of, but is mostly harmless.”

“I said mostly!” he scowled. “What more do you want from me, woman?”