REVIEW: Lucia in London and Mapp and Lucia by E. F. Benson 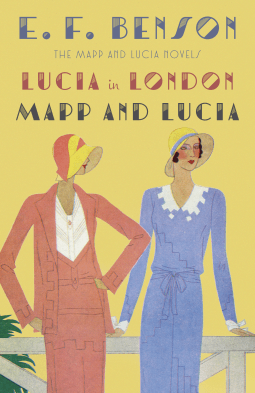 E. F. Benson’s beloved Mapp and Lucia novels are sparkling, classic comedies of manners set against the petty snobberies and competitive maneuverings of English village society in the 1920s and 1930s.

The third and fourth novels in the series, Lucia in London (1927) and Mapp and Lucia (1931) continue the adventures of Benson’s famously irrepressible characters, and bring them into hilarious conflict. Both Mrs. Lucia Lucas and Miss Elizabeth Mapp are accustomed to complete social supremacy, and when one intrudes on the other’s territory, war ensues. Lucia sees herself as a benevolent—if ruthless—dictator, while Miss Mapp is driven by an insatiable desire for vengeance against the presumptuous interloper. Their skirmishes—played out on a battlefield composed of dinner parties, council meetings, and art exhibits—enliven the plots of Benson’s maliciously witty comedies.

“Lucia in London” starts back in Riseholme with pretty much the same crew. Still seething with “inductive reasoning” – ie rampant speculation. “Any news?” Oh my dear, yes. Condolences to the Lucases for dear Peppino’s aunt and then let’s starting trying to calculate the inherited windfall. There’s the house in London, near Harrods, filled with lovely heirlooms and the pearls. Georgie the – sometimes not so devoted – henchman of Lucia plays up to her sad bereavement, though Lucia’s delighted expectations occasionally peek out and she has to ruthlessly poke them back into hiding. Soon everyone is buzzing about on the green uttering “No!” – with emphasis, and we all know what that means.

THIS SIMPLE WORD “NO” CONNOTED a great deal in the Riseholme vernacular. It was used, of course, as a mere negative, without emphasis, and if you wanted to give weight to your negative you added “Certainly not.” But when you used the word “No” with emphasis, as Daisy had used it from her bedroom window to Georgie, it was not a negative at all, and its signification briefly put was “I never heard anything so marvellous, and it thrills me through and through. Please go on at once, and tell me a great deal more, and then let us talk it all over.”

Then Georgie gets the joy of telling Olga in the utmost detail every little thing that has happened in Riseholme while she was on her gala American then Australian year long operatic tour. Delicious.

But wait! Are the Lucases contemplating a move to London? Surely not given how long and how often Lucia’s described it was a wasteland, a desert of artistic culture. But from Lucia’s sudden acceptance of “listening in,” auction bridge and Stravinsky it would appear so. What will Riseholme do without its Queen? Well, Georgie has an idea or two, treasonous as they might be. Daisy Quantock, meanwhile, who describes Lucia’s influence over the Riseholmites as “push” while Georgie calls it “leading,” says she won’t be talking about Lucia anymore. Even if she does gobble up the social news in the London paper.

Soon the Riseholmites are in a quandary. Do they get pissy that Lucia has left them far behind as she climbs the glittering ranks (or forces her way into Society, as some sniff) of London. Or do they cheer on a hometown’s own?

Now that Lucia is in London, she feels pangs – brief, mind you – of envy for dear old Riseholme and what’s going on there. Since she’s not yet the arbiter of all that is fashionable in London that she was in Riseholme, she has to grab onto whatever “billowing wave-ish” people and things she can. Meanwhile Riseholme has decided that pissy is how they will feel about how Lucia has cast off her old followers but feeling that way is nothing compared to how they respond to her snubs and the laughter of her BYTs who come down from London with her and mock them and their village. Nemesis is about to smack Lucia right in the puss.

And yet … and yet even as Lucia gets the snubs and set-downs she so richly deserves for her own snubbing of Riseholme, she manages, by way of relentless effort and hobnobbing with her hopefully soon to be “dear” friends, to soar in London society. She even gains a devoted following of “Luciaphiles” who watch and discuss her with rapt admiration for her social saves and breathless determination to be accepted. As Adele, Lady Brixton says to Marcia, Duchess of Whitby, she might be a social climbing snob but she’s honest about it.

Once she bows in contrition for her bad behavior at home, even her now bereft Riseholmites are somehow happy to see her return for no one keeps things quite as interesting, as “on the boil” as does Lucia. How Benson manages this is masterful. You want to hate her and see her fail but she’s got too much drive, too much “oomph.” B

“Mapp and Lucia” is the book we’ve been waiting for. Finally the two arbiters of what is acceptable and fashionable in their individual villages clash – or meet again as we discover they had a brief time together a few years ago when Miss Mapp of the hyena smile vacationed in Riseholme. She thinks she’s going to lead Lucia, take her under her wing and dole her out to Tilling but Lucia catches on immediately and has no intention of being lead around and trotted out at Elizabeth’s bidding.

There is a final, and hilarious, hurrah set in Riseholme which is attempting to stage a pageant of epic proportions for the American tourist dollars. Riseholme, the perfect Shakespearian village is going to produce a series of tableaux of Good Queen Bess and the Spanish Armada which, with Lucia sidelined, would be doomed. With disaster staring them in the face, an appeal is made which Lucia graciously accedes to thus turning it into a triumph. But it is her last one there as she’s decided she needs a new start and new people to conquer – ahem, lead.

An advertisement in the Times leads her to just what she’s looking for: a new village with new social interactions to direct and a new place to be Queen. The only issue is Miss Elizabeth Mapp who has bullied and badgered Tillingites for years. Lucia doesn’t lose a moment in starting her takeover and plays the situation almost perfectly. Soon she’s set Elizabeth a set down and series of smart social slaps that establish her own dominance and cause Elizabeth no end of teeth gnashing.

But while initially it’s delicious fun to watch Lucia turn the tables and end up in charge, thwarting Elizabeth at almost every turn, soon it began to feel different to me than the previous three books. In those, the social climbing and one-upsmanship was deft and funny. Here, Elizabeth’s attempts to reestablish herself and take Lucia down a peg or three were more mean spirited, more ugly. The finesse seemed off. At the very end of the book, Elizabeth has pulled something off to regain a bit of her own and her exchange of gimlet glances with Lucia promises a renewal of their battle of social standing and control so perhaps the next two books will return to the elegance and rapier passes which are so delightful to read but this one was more mudslinging and barroom brawl instead of sophisticated drawing room manners. C+