Also read: Far From the Madding Crowd, The Rosie Effect, Lady Be Good, Luck Be a Lady, The Legend of Lyon Redmond , One Night 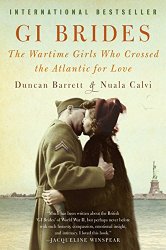 This nonfiction book recounts the stories of four different Englishwomen who met American G.I.s in Britain in World War II, married them, and emigrated to the United States. The authors apparently interviewed over 50 war brides but chose to settle on portraits of these four, which seems odd given that they ended up being stories of three unhappy marriages and one relatively happy one (though that couple faced a lot of adversity, as well). The narrative is told in a linear style that bounces back and forth between the various women, which was a bit confusing early on as I had trouble keeping the women and their histories straight. Once they arrive in America all of the stories turn almost bitter, as each woman seems to focus much more on the challenges and negatives of her new life rather than the (apparently scant) positives. Consequently GI Brides ended up being a kind of downbeat read about people I didn’t like that much. My grade was a C+ (maybe slightly high but it was an easy read, which probably accounts for the “+”). 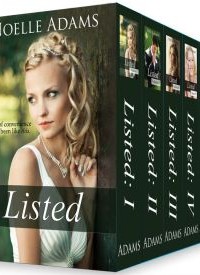 I got this from the Daily Deals and it was a weird one. The story is about a 17-year-old girl, Emily, who discovers she’s dying of a mysterious illness and makes a deal to marry 23-year-old Paul in exchange for testifying against his crime-boss father. In one of the story’s many improbabilities, Emily just happened to overhear the crime boss plotting crime things while visiting her aunt at work one day (her aunt has since died of the same mysterious illness). Emily has a bucket list and being married is on it; Paul also helps her cross off the other items on her list (visiting the pyramids, etc.). Listed was strangely compelling in spite of the fact that it was ridiculous. The plot was absurd, with a hero who’s the son of a Philly mobster and an upper-class Main Line debutante. Both the medical information regarding Emily’s illness and the legal stuff seemed *extremely* suspect to me (I’m not a doctor or a lawyer but it all seemed way out of left field). The hero and heroine’s thoughts as they fall in love are really, really repetitive. A lot of the action is repetitive as well, with Emily falling ill, then getting better, then falling ill again (this is supposed to be the pattern with her illness but it still got old reading about it). Yet I found myself engaged in the book anyway. It almost read like a teenager’s fantasy – a young girl swept off her feet by a rich and handsome guy, tragically (almost) dying, etc. I gave it a B. 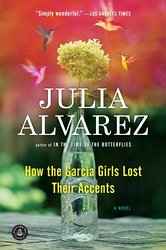 How the Garcia Girls Lost Their Accents by Julia Alvarez

I ended up giving this a B-, but it stayed with me for while after reading it, so maybe it deserves a B? I found it hard to connect to the story at first; it’s a series of episodic but not linear tales (they’re actually reverse chronological order but that wasn’t clear to me at first because it wasn’t always clear what period each story is set in). There were different narrative voices as well, and I sometimes had trouble distinguishing them. The protagonists are the four Garcia girls: Carla, Yolanda, Sandra and Sofia, who are born into a wealthy and prominent family in the Dominican Republic but have to emigrate to the United States as children when their father comes under the scrutiny of the Trujillo dictatorship. The stories cover themes of acculturation, memory and the ties of family (especially sisterhood, obviously). Even though I had trouble with the structure at first, I’m glad it read this. 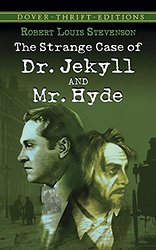 I’ve long been familiar with this story but never actually read it. Last year I started Dracula in October, wanting a classic horror story, but ended up finishing long after Halloween. Dr. Jekyll and Mr. Hyde is actually a novella, so I finished it before the holiday. It has kind of an odd structure – it’s told from the point of view of a friend of Dr. Jekyll, a lawyer named Utterson, and the incidents are all related through him or to him until nearly the end of the book. It ends with an epistolary explanation from the doctor himself. The structure had a distancing effect for me. Hyde’s first two major crimes – the shocking trampling of a young girl and the vicious murder of a prominent citizen – are both related to Utterson rather than witnessed by him. That, and the fact that I already knew of the relationship between Jekyll and Hyde (I’m guessing most people do, via pop culture osmosis) meant that the story was really not remotely scary to me. Still, it was well-written (I’ve never read Stevenson before) and the premise is, of course, an intriguing one. I gave it a B. 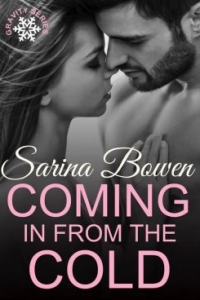 Coming in from the Cold by Sarina Bowen

I’ve enjoyed Bowen’s Ivy Years series (at least the books I’ve read), so I was interested in this, the first book in her Gravity series. Willow and Dane meet and are stranded together in his Jeep during a Vermont blizzard, and one thing leads to another. But Dane, an Olympic skier, doesn’t do relationships. Willow, who is more or less stranded in Vermont in general (she bought an old farmhouse with a boyfriend who then left her for another woman) doesn’t have great self-esteem or high expectations of others. She’s willing to let Dane go his own way (even though they clearly have a strong connection). But when a skiing accident lays him up in the other house on her property (which she just so happens to be renting to his coach), they are put in each other’s way again. Then she finds out that there are unexpected consequences of their night of passion. Willow was a bit of a doormat, but Dane was my real problem with Coming in from the Cold – he has a deep, dark secret that’s the reason for his fear of relationships. He fears he’s going to get a fatal hereditary disease. The thing is, there’s a test for the disease. Dane doesn’t want to get the test. Okay, fine; valid choice. BUT he lives his life with the absolute certainty that he is going to get the disease. This made no sense to me. If you’re so sure that you’re arranging your life around a disease you may or may not get – shunning relationships and skiing in a dangerous and death-defying way – then just have the damn test, maybe? Also, I was wary of the 180 degree turn-around he makes towards the end of the book – his personality issues seemed too deep-seated for such an abrupt change to be remotely realistic. Anyway, I ended up not really liking or caring about either character that much, and as a result gave Coming in from the Cold a C. 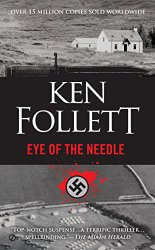 Eye of the Needle by Ken Follett

I think I may have got this in Daily Deals a million years ago, on the strength of vaguely remembering that a friend liked it. I have read one Follett book, Pillars of the Earth, which I kind of remember liking fairly well (how’s that for an endorsement?). But that was a medieval historical novel, and Eye of the Needle is a World War II thriller, which is not really my normal genre. Honestly, it started out rather slow for me, as the various characters who are fated to come together in the climax are introduced. There’s a German spy who has been deep undercover in England for years – code name, Die Nadel (the Needle). There’s a young couple, Lucy and David, whose car accident hours after their wedding changes their lives drastically, and results in them rusticating on a deserted island off of Scotland for the length of the war. Then there’s a middle-aged professor drawn back into the spy game after years away from it, and the younger colleague who works closely with him as he chases Die Nadel. Most of the story is told from these characters’ POV, but there are short passages from the perspectives of other characters, some of them real historical figures like Erwin Rommel and Hitler himself. The latter felt kind of silly and superfluous – there’s something I find both distasteful and cheesy about authors putting words in the mouth of someone as notorious as Hitler. The story got more interesting in the second half and ultimately it was a well-done spy thriller. Still not my genre, really, but I thought the characterization was good (I really liked Lucy in particular). Igave Eye of the Needle a B; it’s probably almost a B+.