“A strategic marriage to a powerful Saracen lord with a penchant for virgins will enable wealthy Lady Jocelyn to keep her fortress home. But at what cost? Her only hope of escaping the depraved lord’s harem is to lose her virginity—and fast!

Captured and tortured knight Simon de Rhys is in no position to refuse Lady Jocelyn’s proposition: his freedom for one night with her. The task seems simple, and deeply pleasurable, until he discovers her secret….” 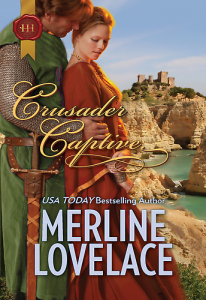 Though I’ve enjoyed many of your military centered contemporaries, it’s actually your historicals which are my favorites – top of the list probably being the older, relatively un-PC “Alena.” In spite of the silly sounding blurb, I find a lot to like in Jocelyn and Simon’s fight for true love in the Holy Land. Ever since I read Elizabeth Chadwick’s “Falcons of Montabard,” I’ve been intrigued by Outremer. The details you include are great and enough to definitely place the book here vs a generic European medieval setting. Plus they leave me wanting to know more about the place and people – which is good sign for me. I like that the specific information augments the story and characters and isn’t just there because it’s cool to know. Also, you don’t hesitate to include details that might make some people squirm such as the heroine’s methods of meting out justice. Her subordinates are just that – they are treated well and taken care of because it’s her duty but there aren’t big group hug moments.

The hero/heroine conflict is real and believable for the time when religion was such a part of daily existence, everyone’s fighting for their lives and land in the Crusader kingdom and it’s pull together or sink. Since parents routinely pledged children to Holy Orders – though it seems usually while said children were young – I can accept this part of the plot. Simon is mad at his father’s pledge but fully believes that his soul as well as father’s are on the line. He’s reluctant but will follow through. He also is well aware that there is just as much greed, avarice and politics in Church as well as outside life. But people believed in oaths to God and in eternal damnation if those were broken and you clearly present it as a powerful enough thing that I can see Simon actually turning away from this wonderful love for it and Jocelyn being willing to give him up.

Jocelyn’s decision to seek out a person to rid her of her virginity is a touch far fetched but no more so than the usual “one night of love to last my whole life” stuff. Here there’s a reason she’s doing this and after it’s done, she’ll submit to the decision of King Baldwin and his mother, Melisande, in their next choice of her, hopefully Frankish, husband. Cue more intricate political workings of the era which are woven into the story. Since Simon is pledged to Temple and Jocelyn is pledged to a desperately needed political ally, neither Baldwin nor Melisande can afford to give into gooey sweet sentiment and let these two have each other without good cause. And the good cause comes in a kickass fight scene that spotlights the horror of warfare of the era.

As the story progressed, I wondered how you’d extricate Simon from his holy vow. It is, after all, a freakin’ holy vow but I guess since he goes along with pledge and initiation rites up til telling moment, he can say he fulfilled his part and marry with free conscience. In regards to the Templer rites – does anyone really know what these were?

So, things are going along well, conflicts are being resolved and a HEA is in sight when I realized there is still a lot of space left. The book finishes with Jocelyn and Simon together – yeah! – and a lot of interesting period info but it all feels rather anticlimactic at that point and, after a little while, a touch draggy.

But I love the presentation of some powerful women – Melisande, Eleanor of Aquitaine and Jocelyn – in an age and place where women actually could be feisty and get away with it. Jocelyn is supposed to be strong – she was raised that way because of her position and expected to be in charge but she’s not a sword swinger, thank God. Simon is her equal, physically and mentally – a strong knight with a leader’s personality and mentally tough enough to submit to his pledge and the initiation for religious reasons as well as strong enough to endure the Templer rite with a final goal in mind. I enjoyed reading their story and returning to a historical from you. B-