Sir Harry Hawthorne and Miss Olivia Darby are neighbors in Leicestershire and their families have had An Understanding that the two would make a match of it once they got old enough. While Olivia has been looking forward to marrying the man she’s loved for years, Harry sees it as a not altogether horrible duty to be undertaken. Torn away from the pleasures of Town Life, he executes his proposal with a decided lack of sentiment. Slightly stung by this, Olivia decides to see a bit of life and have a Season before the parson springs the trap. 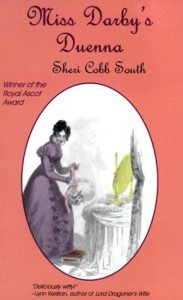 This dovetails with what Harry determines is the best course of action for his younger sister who has taken a fancy to the handsome new vicar. Olivia and Georgina will go to London under the care of Olivia’s mother and do the pretty. But once there, the women meet with a man who holds a grudge against Harry and who decides to take his revenge using Olivia. Harry is startled to discover that while he’s been neglecting his fiancee, someone else hasn’t and that dependable Olivia has blossomed into a diamond. The question of how to keep an eye on her and steer her away from Lord Mannerly becomes the answer of rigging himself up in the guise of his reclusive grandmother. Can Harry pull off his disguise, thwart Lord Mannerly and convince Olivia that he’s realized she’s the woman of his dreams?

I am finally going back and reading the one last trad style Regency of yours that I’d bought years ago but simply never gotten to. What fun it is. Harry starts as a typical young buck, more interested in sights and delights of London but who will do his duty and propose to the young woman he likes but who’s always just sort of, you know, been there. But, also typical guy, he doesn’t put a lot of heart into it and treats it as something to tick off a list of things to do. He does peg his sister and her tendre for the vicar correctly though and makes his first correct move by insisting that Georgina have a Season first before settling down to Good Works.

Olivia Darby does love Harry but that doesn’t stop her from getting miffed at his inattention to her and Georgina. It’s just Harry’s bad luck that Lord Mannerly’s head was in the way of a glass of Madeira and that the Marquess’s pride won’t forgive it. That pride finds a perfect way to revenge in the person of Olivia whom the Marquess smoozes with attention that Olivia isn’t getting from her betrothed. It’s not until Harry opens his eyes to what’s been under his nose that he sees how beautiful and attractive his betrothed is and quickly realizes he’s missed the mark in not paying enough attention to her. He cocks up even further when he orders Livvy to avoid the smarmy Marquess. Things turn hilarious when he dreams up the scheme of impersonating his widowed grandmother – with whom he’s always shared a resemblance – to keep an eye on his affianced.

The situation quickly goes from bad to worse for Harry as he becomes trapped full time in his getup and only too late realizes that he’s essentially left the field wide open for his rival since he now can’t woo Livvy as himself. Lady Hawthorne’s reputation goes up – or down depending on who you ask – when Harry has to smuggle his valet in dressed as a woman and the rumors begin that the old lady is keeping her lover with her. Then Harry has to ask a friend for help and the servants are convinced that the old dame has not just one but two young lovers after her.

The usual Regency facts are here about Almacks, the patronesses, the lemonade, dresses, Vauxhall and such but I sort of get the feeling that you’re winking and nodding about all this and the necessity for it. Yes, yes, de rigueur doncha know, one simply must include all this in a London set book about the Season.

Mannerly spins his plans and lures poor Livvy to her doom with the added caveat that she can’t tell Harry anything. Luckily Georgina immediately cottons on to Harry’s impersonation and is able to aid him in helping Livvy. And Livvy has enough sense to appeal to the one person who can sweep in and also put Mannerly in his place. The whole delightful froth whirls together at the end. Harry and Livvy finally figure out the other loves them madly and that if not for all this, they might have settled into a boring match. Georgina gets a man more suited to her and the Vicar gets saved. Mannerly is reformed and the dowager Lady Hawthorne decides that moldering away in Bath is for sissies and decides to take full advantage of her new and improved reputation with the gentlemen.

I had a delightful time reading “Miss Darby’s Duenna.” It’s frilly and nonsensical in places but it’s supposed to be. A comedy of manners and errors mixed together and served up as a fun afternoon escape from the real world. The one dark shadow over it is the fact that Mannerly appears ready to actually carry out his dastardly plans until he’s thwarted by the tears of a seventeen year old. This bit just didn’t quite add up to the lighthearted rest and Mannerly’s sudden change in the object of his of affections was, well, sudden. Still since trad style Regencies are few and farther between these days, this is a nice trip back to the glory days of Regency yore. B