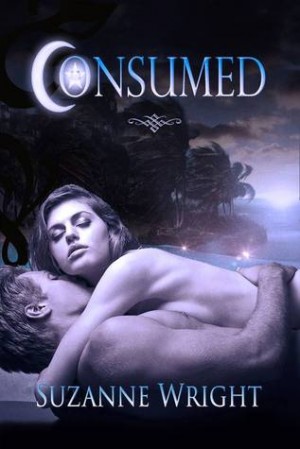 I should know by now not to start series 4 books in but in my weak defense I had read you before so I thought I knew what I was getting into. The previous Wright book was a shapeshifter series and it had a slightly different tone than this one.

Ava Sanchez is a Sventé vampire, the weakest of the three breeds born with mostly boring defensive gifts. She’s living on The Hollow–a gated community set on an off the map Caribbean island with the Grand High Pair.  She’s debating an offer to  join the legion–the army that protects the other vampires. She’s torn, not because she has some place better to go, but because she’s deeply attracted to Salem McCauley. She is convinced that any relationship with Salem will not turn out because most men eventually get tired of her personality. She is convinced she is made for short term flings, keeping things casual and superficial.

We are told that Ava’s past of foster homes has made her doubt herself, but Ava didn’t come off as insecure–not ever. I liked her, don’t get me wrong, but the emotional conflict I was told I should see in Ava wasn’t matched by her actions or deeds.

An illegal brothel is discovered where supernaturals like shifters, vampires, and demons are kept and tortured in terrible ways. Sam and Jared, the Great High Pair, take a group of fighters and are able to free and save some of the prisoners but not all. They discover that the mastermind behind the brothel is a vampire whose power is to occlude her identity. Sam and Jared are off to hunt down this vampire but discover that they have competition with the demons when one of the captured was a demon.

The minor suspense plot is used to showcase Ava as a fighter and to introduce demons as sequel bait and throw in some internal conflict between Salem and Ava. See, Salem doesn’t accept Ava as a full partner but is constantly trying to protect her. The scenes in which the female vamps prove themselves as equals was entertaining and there’s a strong message of equality throughout the story that I appreciated. Even Sam, the female part of the GHP, seemed to be the leader with Jared her strong supporter.

Salem is a familiar, growly hero who is immediately possessive of Ava. He shows his devotion to her repeatedly particularly when confronted with his maker and an ex-lover. For those who don’t mind the awful ex getting her dues delivered on a platter,

There were a lot of parts that reminded me of a Shelly Laurentson book particularly the smart mouth of Ava and the capable squad of female fighters. Past characters, particularly the Grand High Pair, play a big role–almost too big.

Almost all of the reviews agree that the previous three books were better and since I like this one well enough, I’ll be picking up the first books in the series. B-/C+

→ Jane
Previous article: REVIEW: The Boss (Book 1 in the Boss Series) and The Girlfriend (Book 2 in the Boss Series) by Abigail Barnette
Next Post: Friday News: Patterson donates $1M to bookstores, Ebooks in India, a poet’s reinvention, and powerful WWII graphic