REVIEW: When Books Went to War: The Stories that Helped Us Win World War II by Molly Guptill Manning 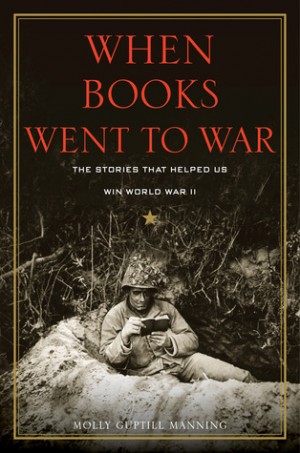 When America entered World War II in 1941, we faced an enemy that had banned and burned over 100 million books and caused fearful citizens to hide or destroy many more. Outraged librarians launched a campaign to send free books to American troops and gathered 20 million hardcover donations. In 1943, the War Department and the publishing industry stepped in with an extraordinary program: 120 million small, lightweight paperbacks, for troops to carry in their pockets and their rucksacks, in every theater of war.

Comprising 1,200 different titles of every imaginable type, these paperbacks were beloved by the troops and are still fondly remembered today. Soldiers read them while waiting to land at Normandy; in hellish trenches in the midst of battles in the Pacific; in field hospitals; and on long bombing flights. They wrote to the authors, many of whom responded to every letter. They helped rescue The Great Gatsby from obscurity. They made Betty Smith, author of A Tree Grows in Brooklyn, into a national icon. When Books Went to War is an inspiring story for history buffs and book lovers alike.

Robin mentioned your book in one of her news selections one day and I was so intrigued that I decided to purchase it.

I unashamedly admit that this book made me cry more than once. Of course every book lover knows that the books are capable of delivering great comfort to us when we need it, but I never knew the extent to which books did that for American soldiers during World War Two. I know a lot about that time from family history and reading, but the war I am familiar with took place on the Eastern front. I am still learning about the war in which American soldiers participated and feel that I still have a lot to learn. This book is very detailed and seems to be an extremely well researched account of how Americans succeeded in delivering millions of books for their servicemen to read when they were waiting to fight, when they were aboard ships, when they were recovering in hospitals, and so on and so forth. The book also advances the obvious argument that while Germany burned books which the regime deemed inappropriate for Germans to read; in the US the books became part of the war of ideas and helped win the war in many ways. I am saying that this part is obvious because I am not sure who can argue that book burning is a good thing.

It was interesting and educational to learn about how books for servicemen were first collected (there was a huge book donation campaign organized by American librarians), how the Council on Books in Wartime was born, and how the printing of Armed Services Edition (ASE) paperbacks started. I found all of this fascinating and not too dry at all.

However, what impacted me the most were the letters from soldiers to the Council, telling them what the books were doing for them and what kind of books they wanted to read. These excerpts are something I am sure I will come back to reread later on.

I liked that the people who were in charge of choosing the books for soldiers tried as hard as they could to give them the books they wanted to read, even if they had to fight against censorship at home, and as a romance reader I was especially pleased to read this request:

“One such request came from a serviceman serving off the Gold Coast in West Africa. This soldier said that books such as Forever Amber, Strange Fruit, and The Three Musketeers (Tiffany Thayer’s version) were what men really wanted. “The books that are most read are the books that have at least an essence of – to put it bluntly- sex and lots of it,” he said. While his unit was lucky enough to have secured copies of Forever Amber and Strange Fruit (most likely because someone asked a relative to send them), both books were overused, with Forever Amber commanding a waiting list of at least thirty men, and Strange Fruit having one almost as long. Clearly, they needed more copies, preferably in the council’s conveniently sized ASE format. Many men echoed these title requests.”

The problem was apparently that Forever Amber and Strange Fruit were banned in Boston for indecency and some members of the Council’s editorial committee “objected to having to give their approval on a number of … books that they consider of a trashy nature”. I was pleased to learn that the end of this particular battle was good, though. Apparently the Council’s executive board tried to come down again and again on the side of printing and sending to soldiers the books they really wanted to read.

“If these books … give the boys overseas the kind of release from tension that they want, then the committee should be delighted to give their approval of the books.”

Of course the books with a lot of sex in them were not the only ones that were wildly popular amongst the servicemen. Apparently “A Tree that Grows from Brooklyn” by Betty Smith was another incredibly popular title because it reminded many soldiers of the life they left behind. I think the letters that the soldiers sent to Betty Smith could make you tear up too. I know I did, and it, inspired me to finally read the book which I have had on my Kindle for a while.

“When I first picked up your book, I was down in the dumps, a sad sack, as the boys say,” a sergeant said to Smith. But as he read, “my spirits rose until at the end I found myself chuckling over many of the amusing characters.” He needed the lift that A Tree Grows in Brooklyn had given him. He had felt depressed and lonely for months, and nothing had given him any relief from these feelings, until Smith’s book. “I haven’t laughed so heartily since my arrival over here eight months ago,” he said.”

The book argues that reading so widely during the war helped servicemen decide to take advantage of college education offered to them by G.I. Bill, which in many ways helped to form the new middle class. I have to take this argument on faith, but it made sense to me.

I am not sure how to grade this kind of book. I know I was very engaged in the narrative and moved by the subject matter. But I cannot catch mistakes in the research if they exist because I am not familiar enough with the subject.

→ Sirius
Previous article: REVIEW: Beyond All Dreams by Elizabeth Camden
Next Post: Thursday News: on the contemplation of women, genre fiction, and life in general