REVIEW: Claiming the Rebel’s Heart (aka Her Rebel Heart) by Alison Stuart 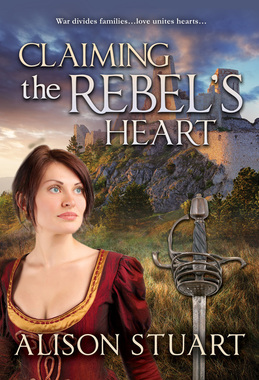 As the English Civil War divides England and tears families apart, Kinton Lacey castle is one of the brave few loyal to the roundhead cause.

With her father away, Deliverance Felton will do whatever it takes to defend her family home against the royalist forces ranged against it. She can shoot and wield a sword as well as any man and anything she needs to know about siege warfare she has learned from a book…but no book can prepare her for what is to come.

Captain Luke Collyer, soldier of fortune and a man with his own reasons for loyalty to the parliamentary cause, is sent to relieve the castle. Everything he knows about siege warfare in general and women in particular he has learned from experience, but when it comes to Deliverance Felton has he met his match?

Deliverance will not give up her command lightly and Luke will have to face a challenge to his authority as fierce as the cavalier foe outside the walls. He will do whatever it takes to win Deliverance’s trust but will he run the risk of losing his own, well guarded, heart?

I’m ashamed to admit that I’ve had one of your earlier books lingering in my TBR e-pile since 2007. I’ll get to it one day – maybe later this year as I see it’s being reissued – but in the meantime I decided to try this years release. DA readers have said they want different historicals from the usual generic Regency and I think this one will fit the bill.

I was looking forward to trying this because I can’t recall another romance book which features a couple on the side of Parliament. Usually it’s a Cavalier hero and heroine or the heroine is for Parliament before she learns the error of her ways – usually at the hands of an overly stern Puritan father – and marries her Cavalier. Luke has his divided loyalties but here he’s working for his conscience which balks at the way his – in his opinion – puny king is acting. Plus it gives this couple a foot on both sides of the divide which will probably stand them well over the twists and changes of fate which will turn the country inside out until 1660.

The heroine who “will do anything” to save/fix/whatever something is a standard of romance book blurbs. Here Deliverance really has something concrete that needs her efforts. She is the eldest daughter of a family who has owned Kinton Lacey for generations. Duty and responsibility to the family and to its dependents is bred in the bone. When her father leaves her in charge, she takes it seriously and doesn’t play around. Though Luke and Ned are initially skeptical of her defense plans for the castle, they soon discover – to their astonishment – that she’s got a keen mind and knows how to defend what’s hers.

But though he’ll grudgingly admit her plans are sound, Luke has been charged by her father with taking over command and he’ll not budge about the disastrous situation of trying to have two people in charge at Kinton Lacey. What he doesn’t say is that her father also threatened his manhood and that of Ned should any harm or compromise come to his daughters.

Luke’s opinion rapidly changes about Deliverance. He begins to admire her intelligence and think her a comrade and an equal. Luke also has enough sense to get Deliverance on his side and working with him instead of butting heads every day. Meanwhile she’s wondering how it would feel to have someone to depend on all the time even if she will only admit that he’s insufferable and arrogant … for the time being. Deliverance has always been the dependable one who gets things done while her younger sister Penitence has been the family beauty.

When the siege begins in earnest, the chips will be down and lives will depend on how well Luke and Deliverance can work together and inspire their people even as the situation grows dire. With the example of a nearby fallen Parliament castle household and the horrific fate of its defenders hanging over them, they know they must hold out whatever it takes.

To me the book has a good feel for the times, for how women were viewed, how war – especially civil war – causes such anguish and destruction, how families were divided, and lives uprooted. The reality of war slams into the inhabitants of the castle in myriad ways – Deliverance must push aside her growing feelings for Luke while Pen and her Royalist true love face the consequences of their actions in a horrible way. But Luke has his own demons to worry about in the person of his brother whom he might meet across a battlefield one day.

An important subplot is the relationship between the two sisters. Initially I was afraid it would be a source of conflict – intelligence v beauty and how both have been treated all their lives. But these two are united together and perhaps the only ones who see and support the other for who she truly is. Deliverance is used to overlooked in favor of her beautiful sister so I loved the scene when Deliverance gets presented with a token of how much the men admire her bravery. They don’t just see her as a – to them – weak woman but as a person deserving of their loyalty by her actions. Luke finally learns how to … ease her in the direction he needs her to go. Invoking Queen Bess’s speech at Tilbury was a master stroke.

As with any siege situation, there must always be a weak spot the story can exploit. The identity of the traitor here was easy to figure out from a reader standpoint but since the characters didn’t have all the clues, I could see how it would go undiscovered. But the turn of fate that occured based on the traitor’s actions was something I didn’t foresee. Booyah for surprising me with that and for also making it believable.

I thought the romance was handled well. Deliverance has never had any young man interested in her for herself while Luke has left a trail of broken hearts and seduced dairy maids across England. Each has enough sense about the situation that initially they know not to act on any feelings or even yet admit them to each other. There is a siege to weather with everyone within the castle watching them as the leaders. So no hanky panky in the ranks. Yet feelings will out and each is stunned at the depth of them. Still the sexy times wait until Luke and Liv are both sure of their feelings and of each other. Plus this is a freer sexy times time so their early consumation is more than the standard “I must have one night of love to last me my whole life” heroine refrain.

For anyone concerned about Deliverance’s unladylike behavior, at least in the eyes of her father, and his – dare I use the word for a Parliament man? – cavalier treatment of her, be assured that she stays true to form and willing to be shocking and direct to get what she wants, when she wants it and that Luke seems thrilled about this. Luke will have his hands full – in more ways than one – with this one. B